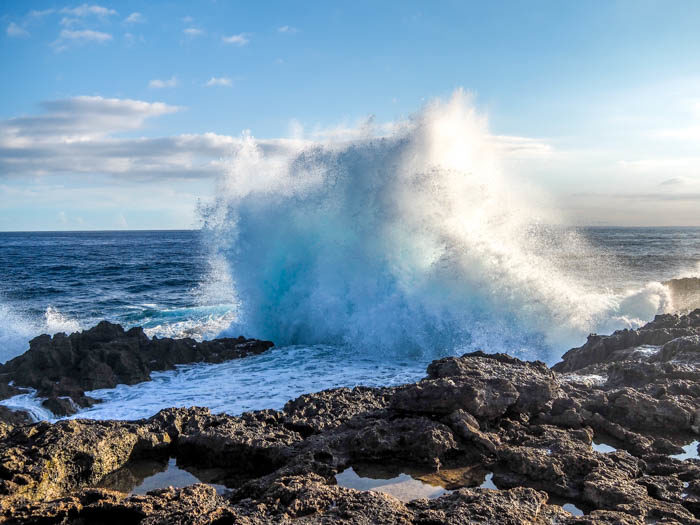 Ever since we started traveling we have always purchased travel insurance. There is really no reason not to. There are plenty of options for cheap travel insurance and it makes sure you’re covered if something goes wrong and you have an accident abroad.

For four and a half years, nothing went wrong. Until Nusa Lembongan, Indonesia, that is.

This tiny little island was about to give us the scare of a lifetime.

The trip started like any other in Asia. You’re hot and exhausted from the second you leave the door, heavy backpack weighing you down, blasting hot sun scorching your skin, humidity covering you in a thick layer of filth, sunscreen burning your eyes, all while you wait for the inefficient and late ferry to take you from Bali to the tiny island of Nusa Lembongan.

We weren’t even supposed to be going there. Before our trip to Indonesia I had never even heard of the Nusa islands, but I took a cooking class, one girl raved about them, and new travel plans were formed. We wanted to leave the crowds and commercialization of Bali behind and visit a more forgotten and quiet island.

The ferry company delivered us to our guest house  – a new property with a handful of bungalows set on the more secluded part of the island. With our scooter rental arranged we were off, bumping around on the rocky dirt roads, ready to see the dramatic cliff hugging landscapes.

We were immediately in awe of the gorgeous cliff formations and the super strong waves which were spraying huge puffs of cold water multiple feet in the air as the water hit the cliffs and bounced up.

I couldn’t get enough. I was running around snapping pics of everything in sight. This was amazing. I didn’t even care that it was 5pm and the sun was still so strong I essentially had sweat dripping into my eyeballs uncontrollably. I needed more photos.

Unfortunately Dave was a bit less patient and tolerant of the insane level of heat and humidity. He wanted to cool down, so without thinking anything of it, he walked around to a small ankle deep tide pool on the edge of a cliff. 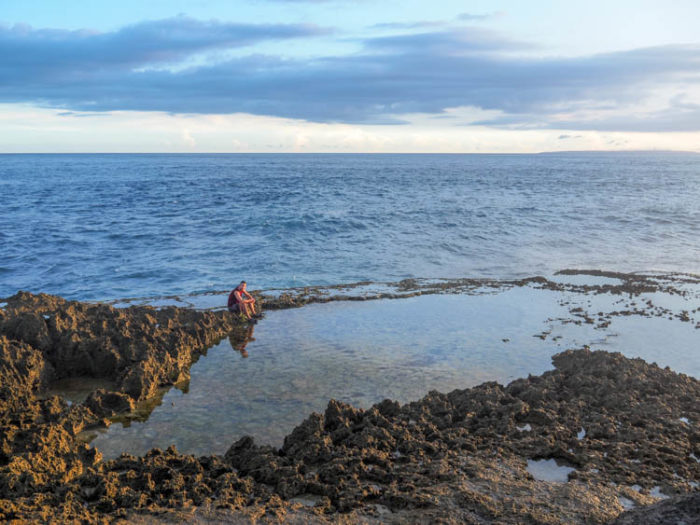 Nobody put two and two together, questioning how the water got there in the first place. He just sat down and wanted to get a refreshing splash.

And he got one. The first wave that bounced off was friendly and harmless. He was laughing. It was fun.

And then the second wave formed.

This one was enormous. I barely had a chance to process what was happening as I was seeing everything unfold through the viewfinder on my camera, before Dave was out of sight.

The wave swallowed him up and he clung to the rocks of the tide pool for dear life to avoid getting dragged off the cliff (a 10 foot drop off  the water) and whisked out to sea.

I was standing from a relatively safer more elevated position and quickly started screaming for him to get out of there before more waves built up.

I could not yet see the damage done.

Once he got up he was covered in blood. The entire right side of his body from his shoulder to his ankle was dripping blood and his bathsuit had been partially torn off.

There was no one in sight, we were in a small secluded corner without a single person nearby.

Dave could walk, but barely, dragging his wounded foot behind him as we had to walk along multiple cliff walls and through a sunset viewpoint restaurant to get back to our scooter.

And then he had to drive us back to the guesthouse because my one attempt at taking us back led to the scooter almost falling over with the two of us on it. Thankfully as soon as we got back the guesthouse owner offered to take Dave to the local hospital where he was bandaged up, given medication and stitches in his ankle.

Long story short Dave was ok! After many visits to the local hospital – which seemed like a bit of a joke considering they prescribed him the wrong antibiotic, the doctor couldn’t even be distinguished from a patient, and the price for the service went up significantly each time even though the level of care provided only decreased.

Luckily the guesthouse owner was kind enough to take Dave over there every 2 days to have his wounds cleaned. By the way a tiny island in Indonesia is not where you want to be with a dozen open bleeding wounds. He was specifically told to stay out of the sea water, sand, sun, shower water and essentially told to hole up in an air conditioned room to prevent infection. With the humid and dirty air, wounds can take much longer to heal and easily get infected.

I naturally quickly read up on all the horror stories online about what could go wrong and was almost in a panic.

And then on day 2 of Dave’s recovery the power went out in your little bungalow. No internet, no A/C, just us with nothing to do, and the heat and humidity slowly seeping in.

Jumping in the pool to cool down was unfortunately not an option for Dave. When you’re got open wounds all over your body a small island in Indonesia is far from paradise.

When the swelling finally came down and Dave was able to start walking again we made our way back to the main island of Bali, though that was an adventure in and of itself. Since the local boats do not pull up to a dock you essentially need to walk through knee deep water to board the boats — not a good idea for Dave’s foot.

I did what I could and by that I mean I stuck his leg in a dry bag and then wrapped it up with a bright yellow poncho. Yes it looked ridiculous but hey, desperate times call for desperate measures.

The boat crew had better ideas. Two guys simply lifted Dave in their arms and hoisted him onto the boat. And then he got a piggy back ride off the boat.

Unfortunately there is no photo footage of either event.  After several more visits to a more legitimate and professional hospital Dave’s stitches were ready to come out and our “house arrest” in Indonesia came to a close.

Lesson learned — watch out for Mother Nature and think before approaching cliffs with large waves. Ironically enough Dave’s accident happened on Earth Day. Overall I think Dave was lucky that his injuries were not more severe and we’ll always be grateful for that.

Most importantly – always opt for travel insurance on your trips! Happily, Dave’s $480 hospital bills were all refunded and he’s made a full recovery.