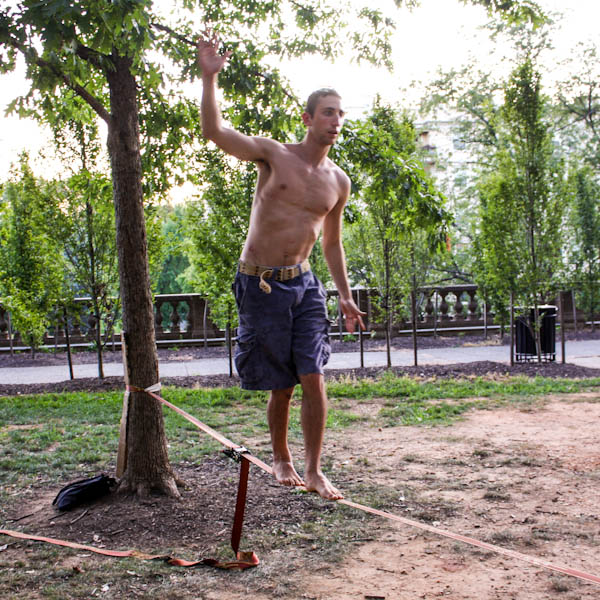 Dave falls in about TWO seconds

Ever tried slacklining? Or even heard of it before?

Slacklining is the act of fastening a rope (more accurately referred to as nylon webbing) between two points and then walking across it. Unlike a tightrope the slackline is not pulled as tight and allows for stretching and flexibility (which only makes it all the more difficult to balance on it). This bouncy line can easily be pulled between two trees as close to the ground as desired, though you might want to start only a foot off the ground just to be safe.

Rope walking has been around for thousands of years, but slacklining is a fairly new and popular adventure activity. Adam Grosowky and Jeff Ellington pioneered modern day slacklining. In 1979, while studying at Evergreen State College they came up with the idea, first walking on loose chains and cables around the campus in Olympia, Washington.

Ever seen someone slackline? Did you watch the 2012 Superbowl Half Time Show? Andy Lewis, dressed in a toga slacklined in the middle of Madonna’s musical performance and brought tons of exposure to the sport. He makes it looks easy.

Trust me, you won’t be bouncing around like he was anytime soon.

I had watched the Superbowl half time show without even realizing that the feat performed was known as slacklining. Until Dave and I first discovered Meridian Hill Park in DC I had never seen it done in person and until this past weekend when my cousins came to visit with their slackline, I had never tried it before.

Let me tell you it is even more difficult than it looks.

When you first get yourself on and hold onto somebody for support it doesn’t seem so bad. 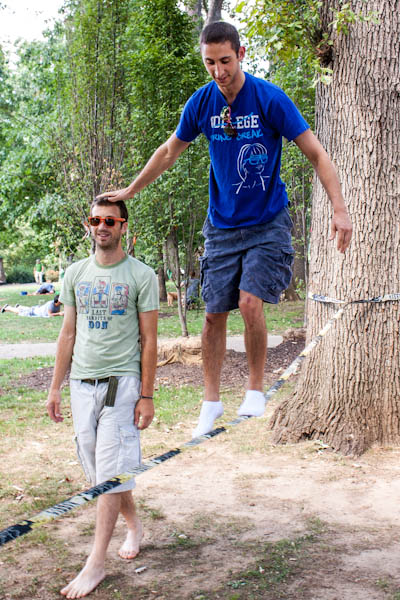 Can we photoshop out the guy on the left?

But once you let go, the balancing act begins. Your knees start to shake. You feel wibbly wobbly, as if you can’t strain your legs no matter how hard you try to keep them steady. Simultaneously the arms go up and start flaying about and inevitably, half a second later you’re off the slackline. 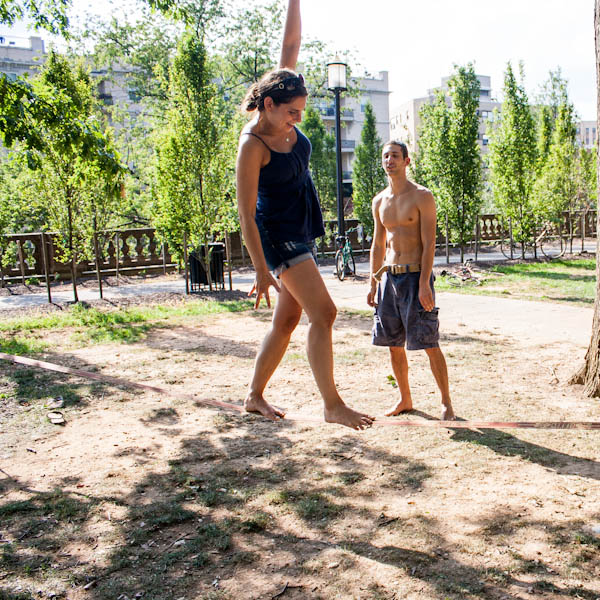 Teacher, teacher! I know the answer

Keep trying. If you really work at it, half a day later you may be able to walk from one end to the other (something I never achieved).

As for the slackliners themselves. Who are those people that spend their afternoons performing tricks on ropes strung between two trees? From the people we saw at Meridian Hill Park it’s certainly a laid back, free spirited, friendly group. With at least 5 slacklines set up they had no problem letting everyone try out the lines. As more people trickled in to their circle the scene became more colorful. A couple of guys came with their juggling balls and bowling pins, a girl rolled in on her unicycle and one more guy brought his devil sticks (which he even let Dave have a go at). 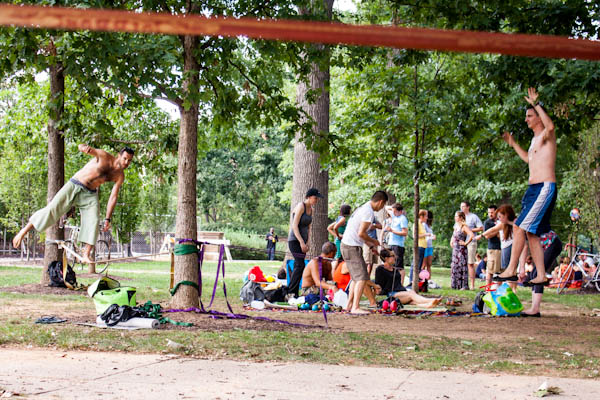 the experts…I want to be them so badly

Overall, we had a great time at Meridian park trying out the different slacklines and letting people go on ours and even learning a few tips and tricks from the better guys. Hopefully this will only keep growing in popularity and though it’s more popular on the west coast I’m glad to see the slacklining community in DC is thriving.

7 Responses to Slacklining in Meridian Park