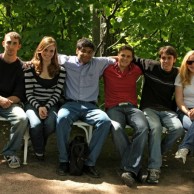 Mark Twain, part of travelog from his trip to Egypt. 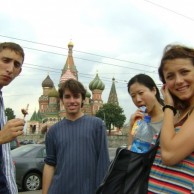 The other day as I was leaving the metro I was stopped by two police officers. It’s actually fairly common place that police stop people and demand to see their documents. Sort of like our illegal immigrant problem in America, there are a lot of people here illegally from the Caucuses, and there is a lot of hostility towards those people as they are blamed for much of the crime and such in Russia. 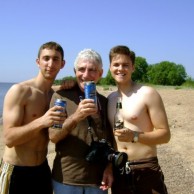 Today, I think, was my first 4th of July outside of America. The program did a pretty reasonable job of making us feel at home. We had the day off of school to begin with. Next, we went to a supermarket, bought $400 worth of food/supplies on Harvard’s dime, and went to the Gulf of Finland. The Gulf of Finland is a beach, sort of. If you were back home, it wouldn’t be a beach you would rush to. 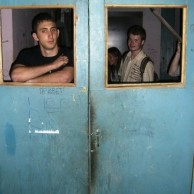 Recently I attended Pasha’s birthday party. He turned 19. It was only me, this other girl from the program, an American we know, and three Russian people, one of which is my other Russian friend Natasha. It is pretty unbelievable to think that we only met a couple of weeks ago, and now I was at his birthday party. We didn’t do anything special, as Pasha had apparently lost a considerable sum of money betting on the Netherlands to win the soccer game. 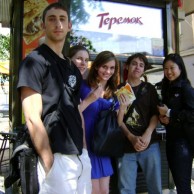 Being Russian in America isn’t a big deal. If you hear Russian on thesubway, you might glance, and then think nothing of it. However, in Russia, being American attracts its fair share of attention. This is both good and bad. On the subway in the morning, speaking English definitely attracts attention. This is the kind of attention I generally don’t care for, as you don’t feel very discrete. 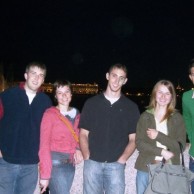 I’ll never understand why I always hear about how much Americans go to McDonalds. Never have I seen such long lines at McDonalds as I have in Europe (Italy too). It’s ridiculous. Imagine four of the longest lines you’ve ever seen in America. I’m finding it impossible to escape from my accent. When I want to look like I am Russian, I generally keep my head tilted downwards and remove any trace of a smile, 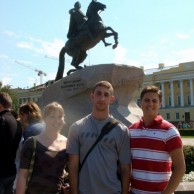 In many ways St. Petersburg is like most cities; people, buildings, cafes, restaurants, metro, etc, but you do start to notice little differences after only a few days. For example, on the metro, at peak hours, only women sit, as it is too crowded for there ever to be a free seat for a man to sit down. Also, the old women who sit often have their eyes closed in order to rest, while many others read a book or newspaper. 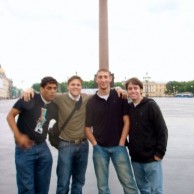 After a long flight, Courtney and I arrived at the Russian airport at around noon on Saturday, their time. Unfortunately, our bags did not. I was not surprised, as we had originally sent them to Helsinki, and then asked that they be sent directly to St. Petersburg, which they said they had done. I figured there had been a mix up, and that they would arrive tomorrow from a later flight.