Journey to the Taj Mahal 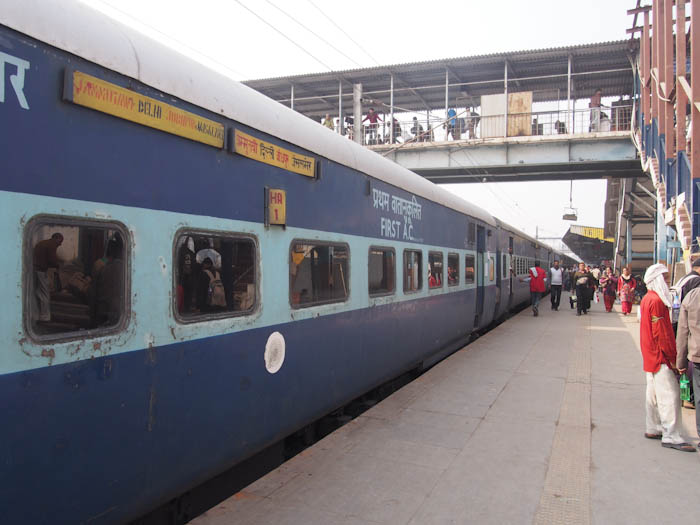 It was a bit of an adventure getting to the Taj Mahal itself.

We landed in Varanasi and spent a few days there before heading over to the train station to purchase our tickets to get to the Taj Mahal.

It was the middle of the week so we just assumed there would be no problem securing overnight train tickets to Agra (the city where the Taj Mahal is located).

Such was not the case. The man at the ticket counter let us know that overnight trains to Agra were sold out for the next two nights and the only option was a day train on the second day. Killing an entire day on a train is not my idea of a good time, so this was not even an option.

We ran over to tourist information to see if Umar, the man working there, could look into plane tickets. He had another idea though.

He mapped out several other options for us. This man was hands down the most friendly and useful person we met in India, and one of the few who asked for absolutely nothing in return. He spent over 10 minutes writing out the various train numbers, connections and times to give us the best possible chance of getting to the Taj Mahal the day we wanted.

A real helpful chap this man was. As we ran back over to the ticket office, we were in luck, we would be able to take an overnight train from Varanasi to Tundla arrive there at 4am and then take a taxi or train over to Agra. Not exactly an ideal time to arrive, but at least we would get to the Taj Mahal for sunrise right?

As we ran back over to see Umar and profess our sincerest thanks he gave us a bit of a fatherly spiritual talk.

He said with arms outstretched towards us, that he could tell we really wanted to find a solution and we did, because we wanted it most of all with our hearts, and our hearts led us there. It was endearing. I was really touched.

Then he switched to some practical advice. In a more serious tone he flat out told us not to talk to anyone on the train, trust no one he said. We had after all secured ourselves sleeper berths in the cheapest sleeper compartment.

Time for a heavy gulp. We would have a long night ahead of us.

As we maneuvered around the train station trying to figure out what platform we were on (no easy task in India) we noticed that there wasn’t a single other foreigner nearby. My stress levels were rising.

To my relief eventually we saw two more clueless looking backpackers who we immediately rushed over to – were they indeed also going to Tundla?

As it turned out, yes, and they too were saved by Umar. As we exchanged tickets we noticed that the four of us were all in the same sleeper compartment. What a relief.

Getting to our sleeping berths was absolutely madness. The train was completely full and everywhere I looked there were Indian men staring at me.

When we got to our compartment we saw our beds had already been occupied, with several Indian men sitting on each berth. Our two friends had the lower bunks, while I had a middle and Dave had an upper bunk.

I quickly scrambled onto my unoccupied middle bunk while Dave struggled to get a happily perched Indian man off of his. For a while there the two of them sat there crossed legged together, Dave too timid to ask him to leave and the man too determined to step down.

Eventually one of them had to go.

Luckily for Dave it was the Indian man who came down.

Our two friends weren’t so lucky. Having the lower berth I quickly decided is really the worst. Indians seem to completely disregard the Western concept of privacy and have absolutely no qualms about sitting at the foot of your berth even if you repeatdely and politely asking them to remove themselves (as our friends did).

As I started to look around I also realized that the four of us were the only people to have an entire berth to ourselves. Everybody else was either 2 or 3 to a berth. In our little compartment of 8 berths (six on one side of the aisle, two on the other) there were fourteen people with two on each berth except for ours, and two sleeping on the floor between the berths.

How exactly did the train conductor look past this? I did seem to see quite a few people slipping in a coin…

As we slowly trudged along, we finally pulled in to Tundla around 6am, naturally over 2 hours later than we were supposed to.

The ticket office confirmed that there was a train headed for Agra arriving shortly so we made our way over to the platform, though we did not know which side of the tracks the train would come from.

Quickly an Indian man ran over to us, attempting to create a high stress situation, rapidly assuring us that the train would stop for only seconds and we might not have enough time to get to the track so we should hire him as a porter to take our bags onto the train.

Seriously? We would get so caught off guard that we wouldn’t be able to carry our own bags the 10 feet width of the platform in case the train arrived on the opposite track?

As we got on the train after 6:45am it was pretty clear we weren’t going to see the sun rise over the Taj Mahal.

Finally we pulled into Agra around 8am, and what was supposed to be a 30 minute train ride took over an hour.

We finally got to our guesthouse and collapsed on the bed.

If we weren’t making it to the Taj for sun rise, we might as well just get there mid afternoon.

7 Responses to Journey to the Taj Mahal