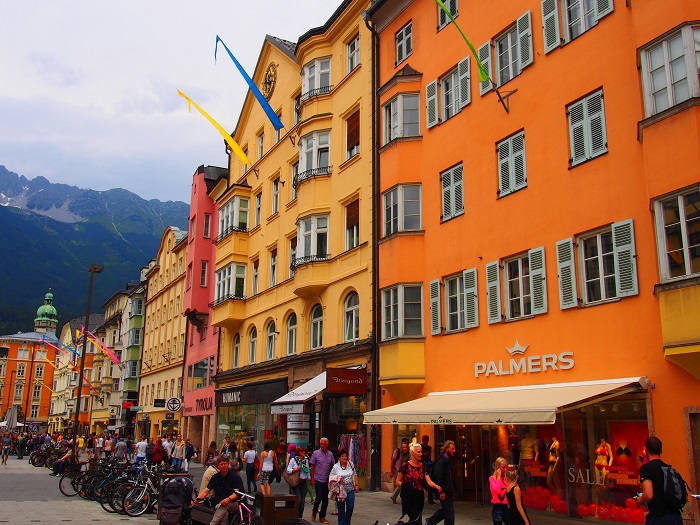 While we were in Laos we met a couple who said they were from Italy yet they spoke English with a thick German accent.

This all started to come together when we got to Innsbruck in the Tyrol region of Austria.

Historically the Tyrol region fell to the Hapsburgs in1363 and changed hands a few times over the centuries until finally being split up in 1919. South Tyrol was ceded to Italy and East Tyrol was isolated from the rest of the province. When Hitler invaded Austria in 1938, he did not take back South Tyrol, him being an ally with Mussolini and all, so the region has permanently stayed separated.

And so today there is the somewhat autonomous Tyrol region in Northern Italy where the main language spoken is German and the people have stronger ties to the German cultural than the Italian one. 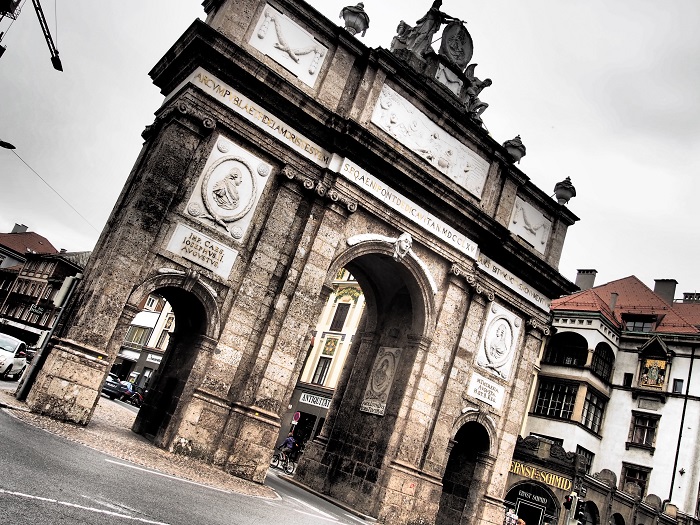 Though we did not travel to Northern Italy we visited Innsbruck, a city on the heart of the Tyrol region in Germany, where we just so happened to couchsurf with a hybrid of the two cultures. Lucca, an architecute student at the university in Innsbruck is originally from the Tyrol region in Italy (just behind the moutain range in Innsbruck) and comes from a mixed family – his father is of Italian origin and his mother is of  German Tyrolean origin.

Luckily from him he has grown up speaking both languages fluently and has also mastered French, Spanish and English, while currently studying Arabic. Mastering several languages simply amazes me and I admire people who put in the time and practice to fluently speak several of them.

Not only that but Lucca is also an avid photographer and rock climber. Talk about a series of hobbies.

The hospitality of couchsurfing hosts never ceases to amaze us and Lucca did not disappoint. He gave us keys to the apartments, gave up his bedroom and told us to make ourselves at home, while he was at the university during the day. 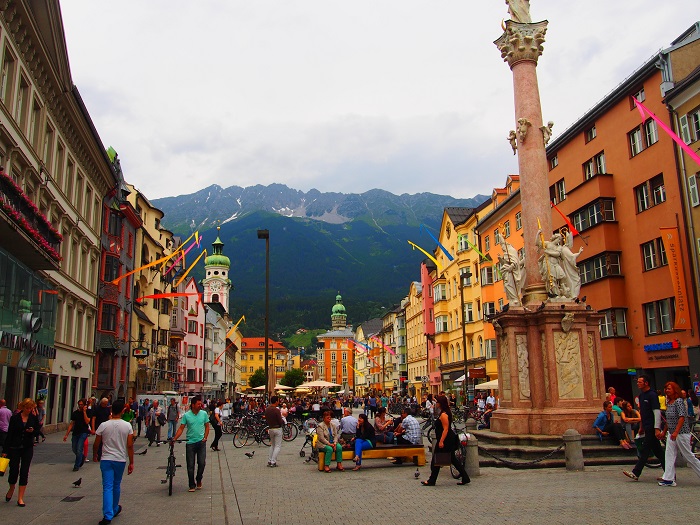 During the day we set out to see the city of Innsbruck. With the towering Alps in the backdrop surrounding you in all directions it truly is a strange feeling being in the center of the city.

It feels like you’re cut off from the world, protected from everything beyond the mountain range. Though Innsbruck has no shortage of museums and castles we thought our time would be best spent wandering around the city itself, strolling down the old streets and taking in the architecture from the outside. 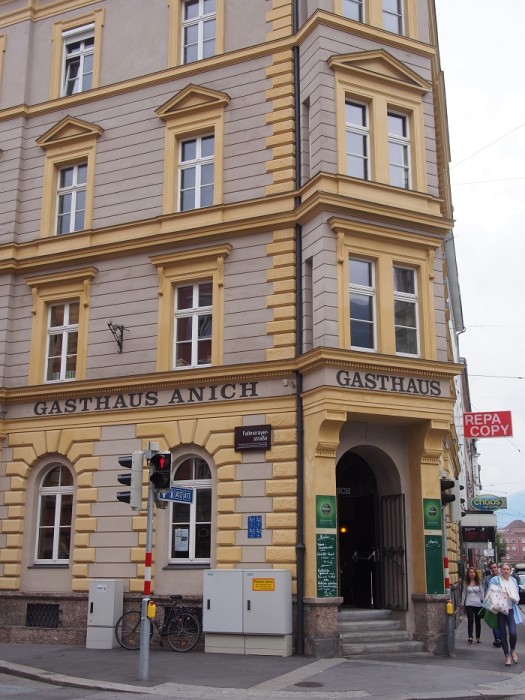 For lunch we stopped at Gasthaus Anich, a traditional Austrian pub where we sampled a delicious goulash and potato hash browns in a mushroom gravy. The goulash is one of my all time favorite soup stews. I’m not big into meat and would be perfectly happy to eat it without any beef in the soup at all – I just love the thick rich taste of the broth/sauce, and the potatoes, I do love those. If you’re in the town center stop by the Gasthaus for lunch. 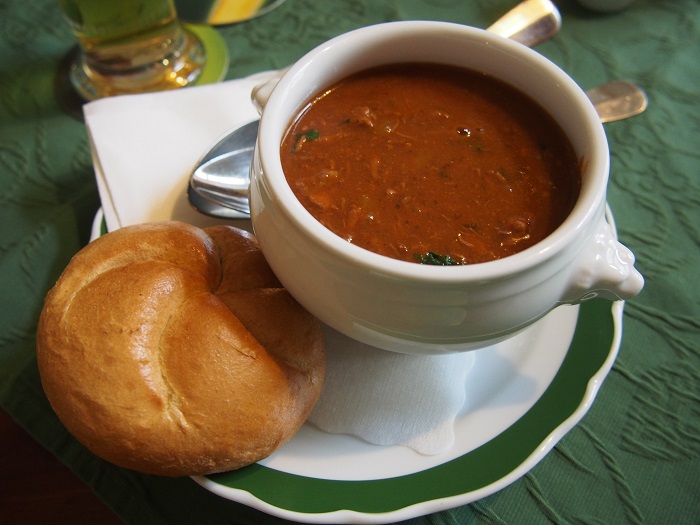 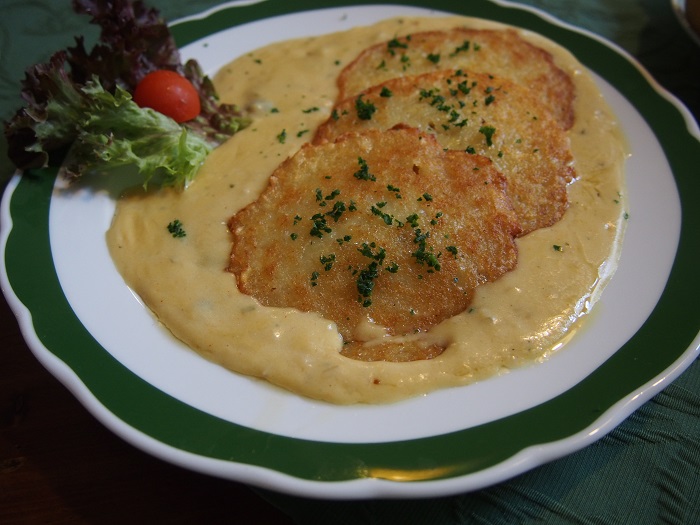 Our dinner meal was even more phenomenal as I helped Lucca in the kitchen where we made the traditional Austrian knodel, from his grandmother’s recipe.

Knodel is a bread dumpling, made with a handful of simple kitchen ingredients, eggs, flour, cheese, old bread and any additional flavors (spinach, veggies etc). We made two different types; a spinach and onion knodel and a cheese knodel.

The dish seems fairly simple and to be honest, plain. Soft bread croutons formed into balls and steamed or boiled? Talk about bland right? 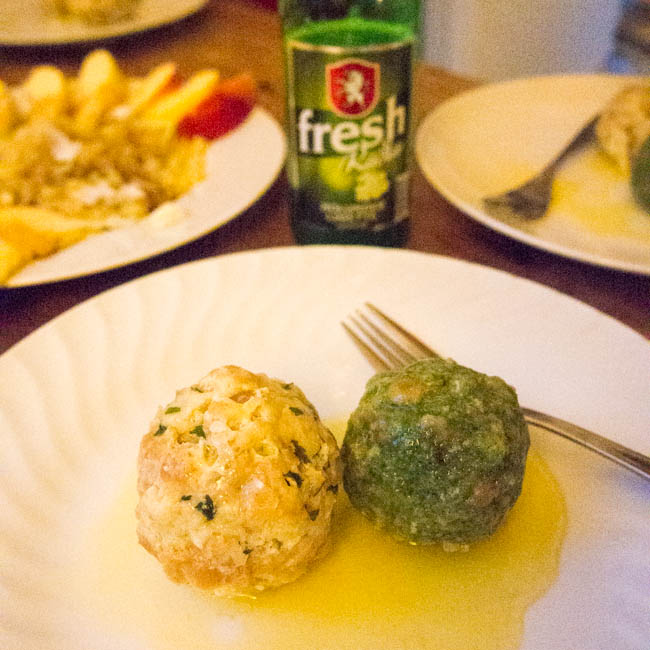 Somehow everything comes together magically and served drizzled with melted butter the knodel is actually pretty damn good if you ask me. We had them in restaurants and nothing even came close to the home made knodel I made with Lucca.

To accompany the meal we had a radler (known as a shandy in the US) though I had never heard of either; this is a beer mixed with lemonade – a perfect refreshing yet light summer drink.

Instead of just plain old water Lucca introduced us to the magical elderflower syrup which he mixed with water to create the most incredible beverage. The elderflower syrup is made from the berries themselves and when added to water (or drinks) gives off the most  incredible scent, so fresh and inviting, where you can almost taste the sweet smell. It’s hard to describe but I was hooked. I have never seen this before in the US but its just about the most pleasant smell and taste I’ve ever experienced. Try and get your hands on some as soon as possible!

For dinner the following night Lucca pulled from his Italian roots and showed me how to make his father’s secret risotto recipe. Talk about rich. The art of risotto making is all in the stirring. The broth is gradually added into the rice, making sure to stir the rice the whole time until the liquid is absorbed before adding more. The creaminess created by this effect is astonishing. With barely any butter or cream the risotto turns out incredibly creamy and rich – all from the constant stirring of the rice. 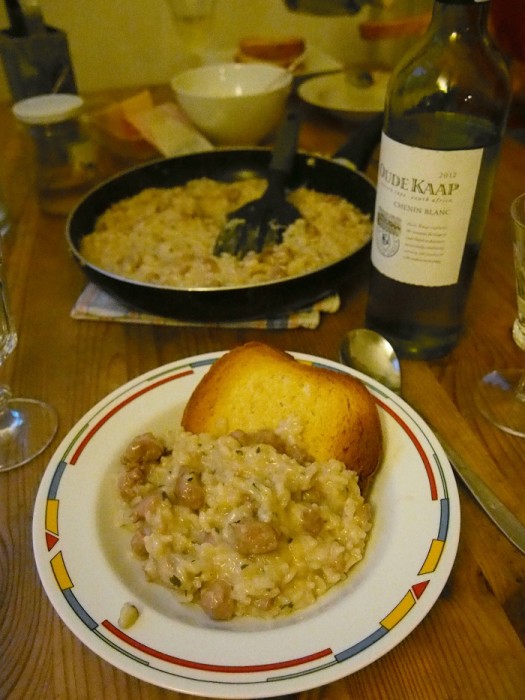 Seriously delicious. Both meals were incredible and to keep the fun going afterwards Lucca took us to a local bar with boardgames where he introduced us to the awesome game of Settlers of Caton, quite simply one of the best boardgames ever. One of those strategy games where you are building up your society. As first time players we outdid ourselves and both beat Lucca, a good sign. 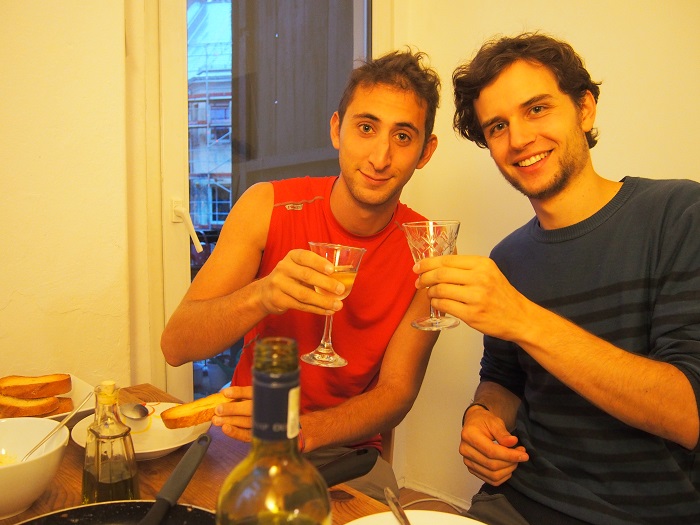 Overall we had a great time in Innsbruck, and most of all we enjoyed hanging out with Lucca and learning more about the Tyrolean/Austrian culture.

3 Responses to Couchsurfing in Innsbruck