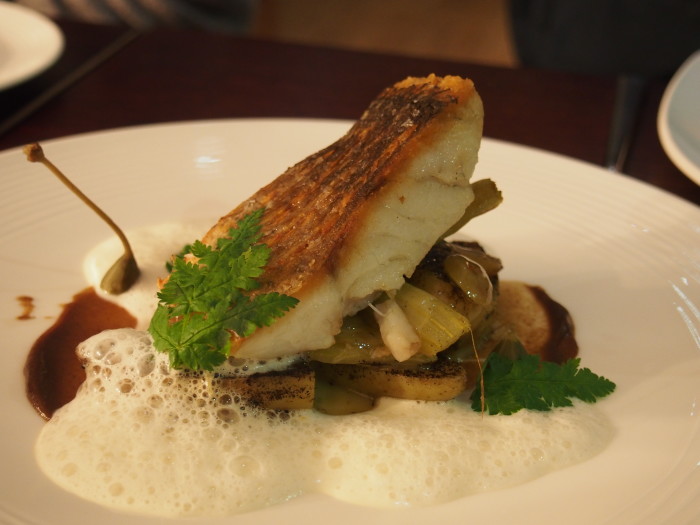 I wasn’t sure what to expect from the food of Scotland. It’s not exactly known for being a gastronomic country. My expectations weren’t too high.

But my taste buds were truly blown away. We had some absolutely incredible meals in Scotland.

In these tiny villages, where I expected us to have difficulty finding anything outside of chain restaurants or fast food, we discovered real culinary gems.

The menus in each place stood out from the next and there was a wide assortment of unique and interesting dishes. I was impressed.

I love to cook and eat and really appreciate a menu full of out of the box dishes and creations. We found this and more in Scotland.

Highlighted are some of the more memorable meals. 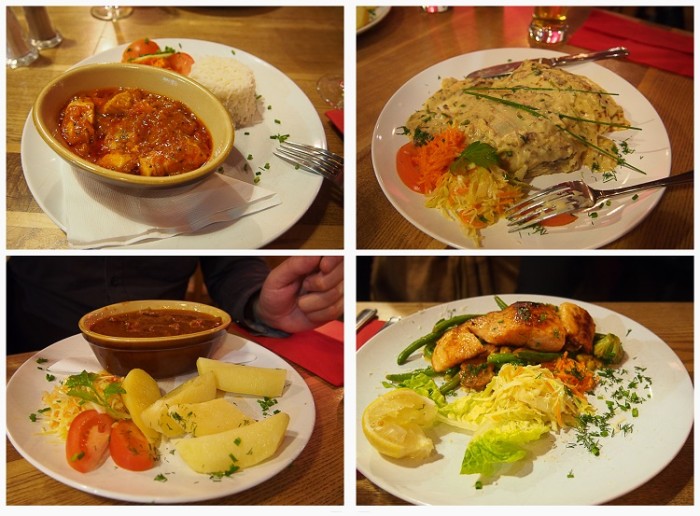 My parents know someone who knows the owner of this place so this was our first meal out together in Glasgow. Russian restaurants generally do not have the best food and are have fairly simple traditional dishes but this place really had some interesting stuff on the menu. As Scotland’s first an only authentic Russian restaurant Cossachok really tried to introduce dishes from the various former Soviet Republics, and does so in a warm and artistic setting. I ordered the Georgian spicy chicken dish, chakhokbili, while my dad got the beef stroganoff, my mom got the poached salmon and Dave got some blinis. Overall some well made dishes. 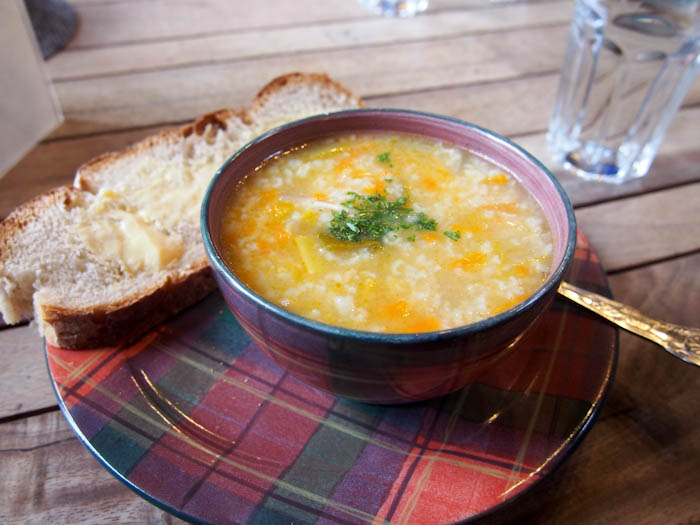 First stop of our driving tour was the small lake side town of Luss, where we stopped by the cafe for some heart warming soup. Now this place knows how to do soup. They had at least 4 or 5 different soups of the day and all of them very gluten free and dairy free (perfect for people with dietary restrictions). My mom and I both got the chicken and rice soup which was awesome – just so rich from a full chicken stock and full of flavor. I even tried to recreate this soup myself when we rented an apartment in Edinburgh but mine wasn’t quite as good (guess I’ll just have to keep trying). 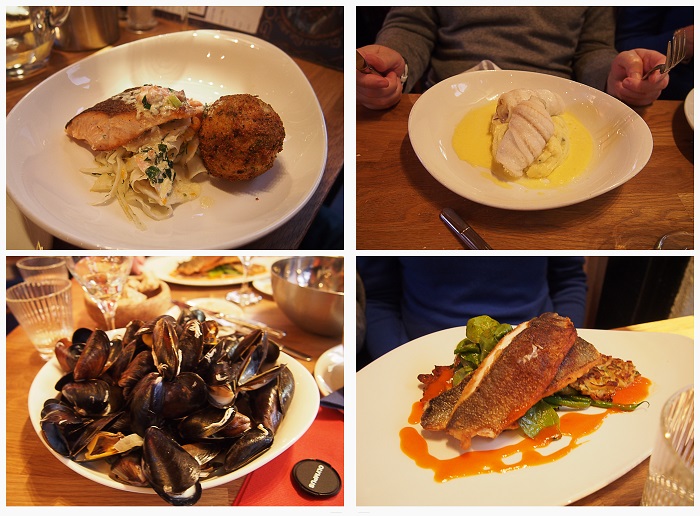 In Fort William while looking for a place to eat we happened to stop by the Crannog and noticed a Michelin star in the corner. We weren’t expecting to find a Michelin star restaurant in this small lake side town in Scotland so naturally had to wander in. Luckily we were there just as they were opening for dinner and were able to snag a table without a reservation. We ordered mussels, salmon, sole and sea bass. The sea bass was incredible. It was perfectly crispy on each side and tender on the inside. I need to master this technique. 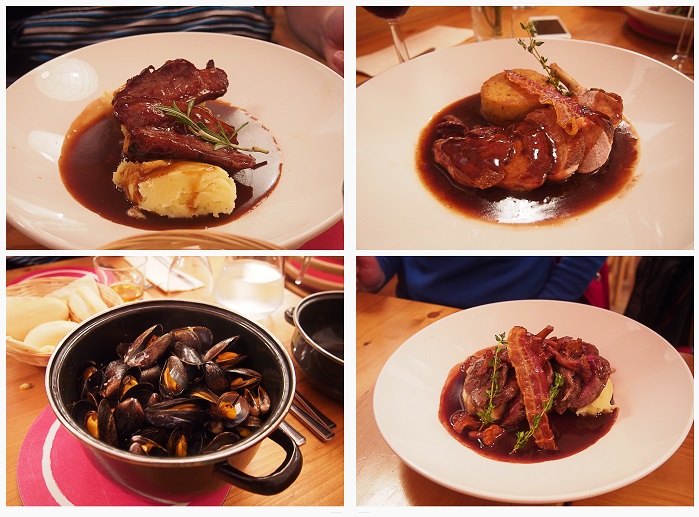 For Dave’s birthday dinner we went out to the top rated restaurant in Broadford – The Red Skye. A chipper husband and wife team escorted us in and the feasting began. We were feeling a big adventurous so ordered guinea fowl and grouse, both of which we had never tried before. The guinea fowl tastes more like poultry while the grouse was closer to a red meat texture and taste. I preferred the fowl but was happy to have tried the grouse. Can’t say I’ve ever even seen grouse on a menu in the US. Oh and both dishes were topped with a piece of bacon – the real way to my heart. 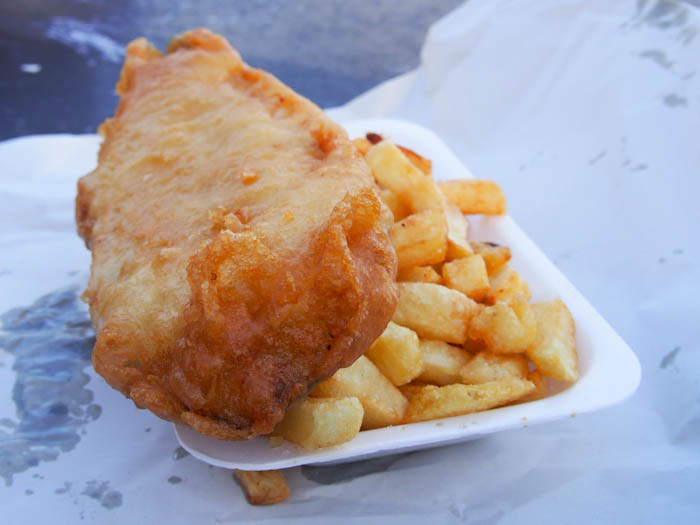 While by the water in Portree we noticed groups of people huddled over trashcans with platters of fish and chips. Without a picnic table in site, setting up on top of a trash can seemed like the next best option I suppose. And so we eventually joined them too. How could I turn down fish and chips? Especially with a squeeze of lemon juice and a squirt of vinegar, this makes for a perfect quick lunch. 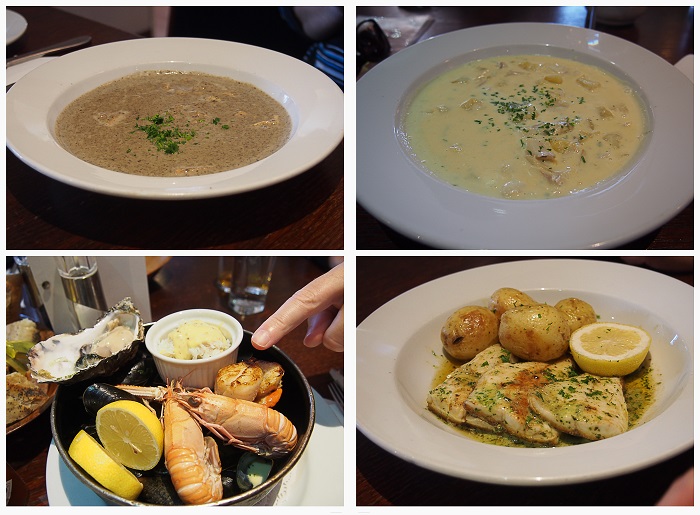 After a lovely boat ride out to see the seals in Plockton we stopped by the Plockton Shores cafe for lunch. Now this place knows how to serve good food. We ordered a few soups, including the traditionally Scottish cullen skink, a chestnut mushroom soup, and a pumpkin soup. The cullen skink was similar to New England Clam Chowder but possibly even better and the chestnut mushroom has got to be the oddest ingredient duo I’ve heard of in a while (but still a hit). For our mains we got a seafood platter (which I could have eaten several of) and some sea bass. Seriously YUM. 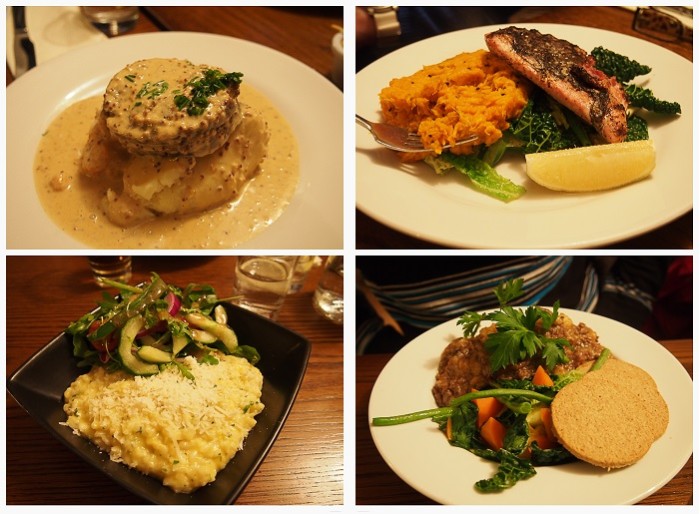 Dores is a small town right on the shores of the Loch Ness and you literally feel like you;re in the middle of nowhere here. So when we walked into Dores Inn for dinner we were expecting burgers and hot dogs on the menu, but instead found tons of interesting options. To start we went with the traditionally Scottish haggis with neeps and tatties, which was delicious, seriously a must try. For mains we got risotto, mahi mahi, some sort of Scottish beef dish and a Thai curry for Dave. I was really impressed with the diversity of the food options in this tiny tiny town. 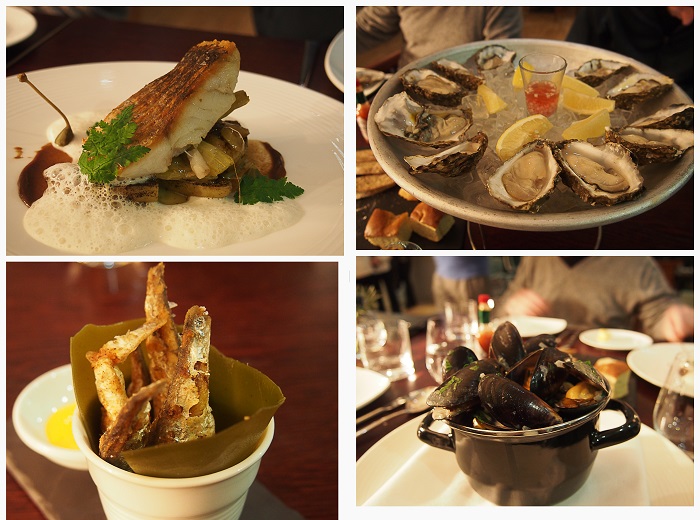 We went to St Andrews in search of oysters (or at least that was my main objective). While I enjoyed walking around sea side town I was really just counting down the minutes until I could slurp up some oysters. We had seen The Seafood Restaurant mentioned in a guide book and went in search of it. It was nowhere to be found though. We were almost ready to give up (and I was almost in tears) before we realized we had passed by it all along not realizing it was even a restaurant. The restaurant looks very upscale and is very expensive but we knew what we wanted so simply ordered without the menu, asking for a dozen oysters and a pot of mussels instead of a traditional seafood platter which is listed on the menu. Luckily they were happy to comply. And then we ordered sea bass and what came out was a work of art. Seriously though, just look at that presentation. Where can I sign up for classes? Oh and for free they give you as an appetizer small fried fish (anchovies?) with what I suspect is a home made mayo (YUM)! 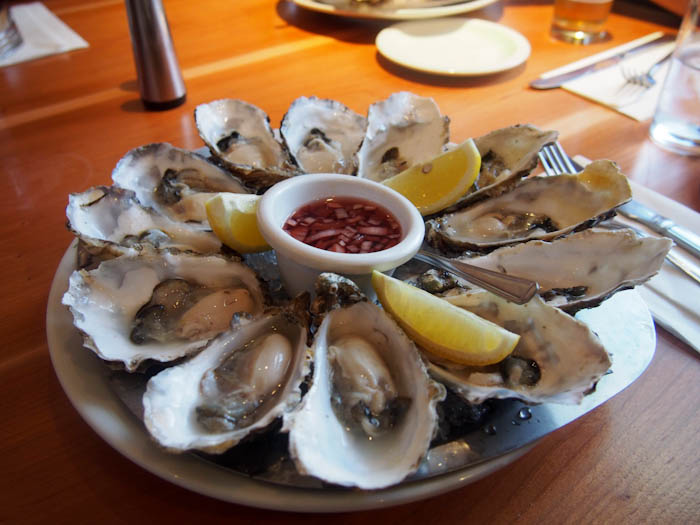 It really is a tradition now for my parents and I to always have oysters when we get together. Nothing makes me happier than sipping a glass of wine while slurping up a lemon tobasco oyster with my parents. Oh how I love family times. So it was only appropriate that on our last night together in Edinburgh we got a platter of oysters. And oh boy they were good.

The Ship on the Shore, Edinburgh 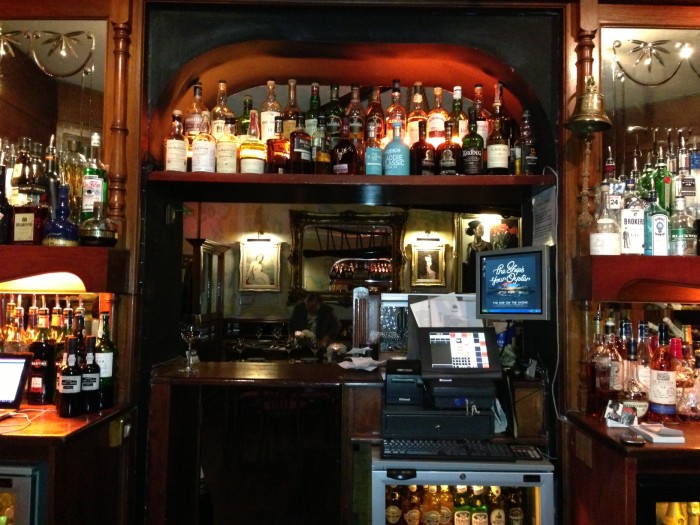 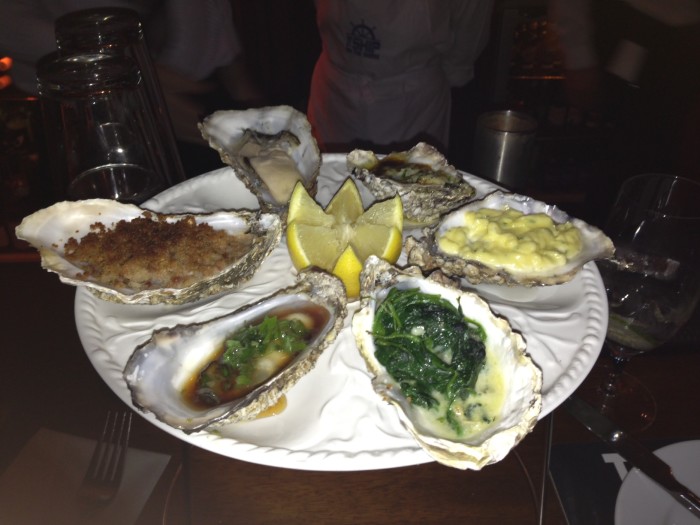 For a quick snack my parents and I popped into this restaurant/bar for some oysters. We ordered a half dozen regular oysters and then decided to get the half dozen oyster selection. We were expecting just 6 different kinds of oysters but instead were treated to a platter of the same type of oyster but each cooked differently. There was the baked breadcrumb oyster, one with a spinach butter sauce, one with an asian soy sauce flare, one creamy one with an unidentifiable though delicious sauce and one that tasted like it had just the slightest hint of mayo.

Utterly and totally delicious! Who knew you could get so creative with oysters? Definitely need to try making some of these myself at home!