After our failed Three Passes Trek we weren’t exactly in the mood to sign up for another trek right after.

So instead we flew to India for two weeks and then came back to Nepal to join our friends Susan and Paul after they competed the Everest region trek.

This time we would be more careful in trek selecting. We wanted to find a max 10 day trek, with minimal risk of altitude sickness.

Annapurna Sanctuary is one we went with. This trek starts a short bus ride from Pokhara and takes you up to Annapurna Base Camp at 4130 meters. On the other trek Dave got altitude sickness at 3400 but that was after the flight to Lukla which in an hour bumped us up to an altitude of 2800 meters coming from 1500 meters.

We thought we’d be able to make it up to 4130 m, especially since you can then come back down to Machapuchare Base Camp and sleep at 3700 meters.

With our new porter Iman in tow, the 5 of us set off.

Our first day we started out in Phedi (after a short bus ride there from Pokhara) and made our way towards Landruk.

We were greeted with views of the rice terraces which never cease to amazing me and some mountains in the distance. A fairly easy day and not too intense. 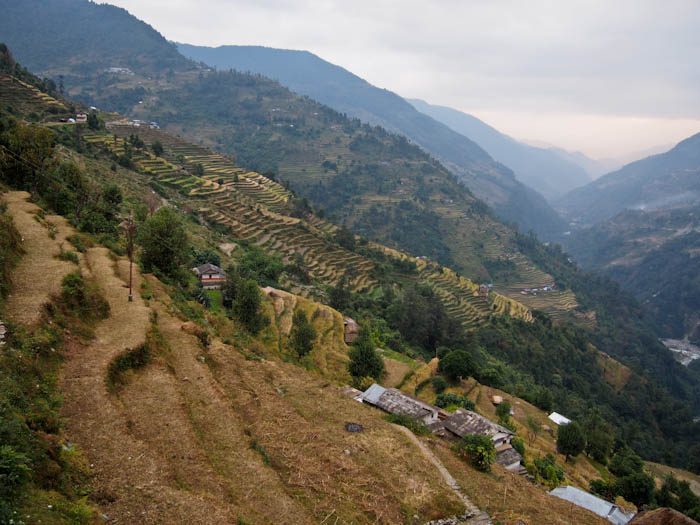 The next day we were up bright and early and ready to go. With trekking the visibility is always better in the first half of the day so trekking during the early morning hours is better than in the late afternoon. We were heading to Chhomrong and there was a lot of up and down. As you climb up, you naturally assume you will continue climbing up. Not so in Nepal. You climb up a little bit and then you drop down a bit, so all the elevation you thought you just gained, has been undone.

The views were starting to get better though, and we saw the snowcapped mountains in the distance in full clarity. 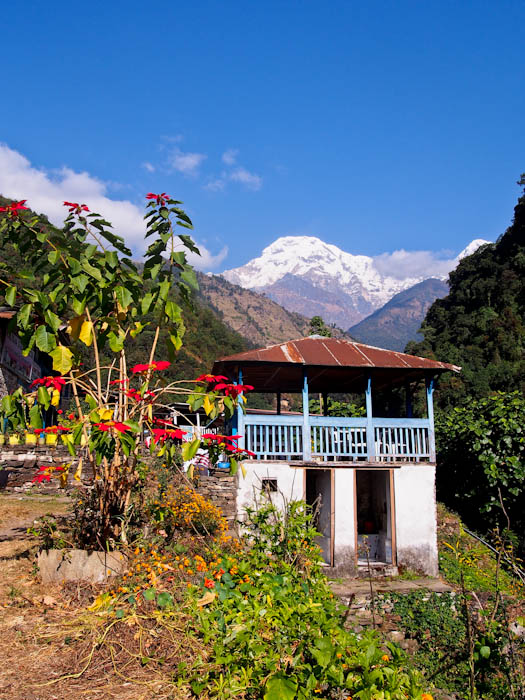 And after the long climb up, our muscles were rewarded by a quick dip in the hot springs. 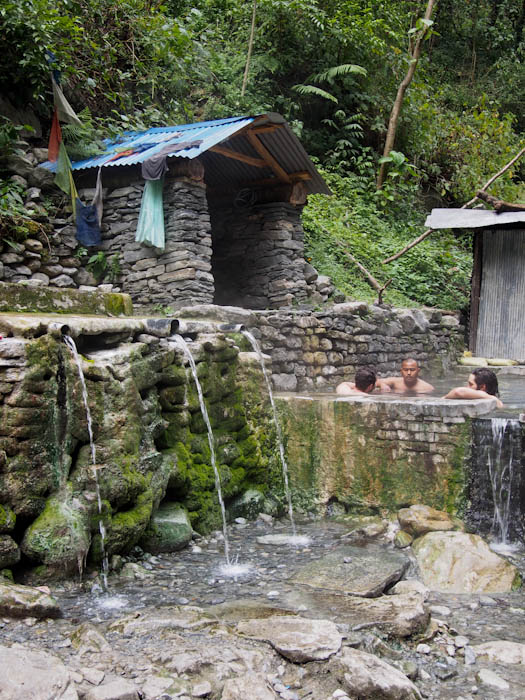 On Day three we seemed to be getting even closer to the mountains, as we made our way to Doban. 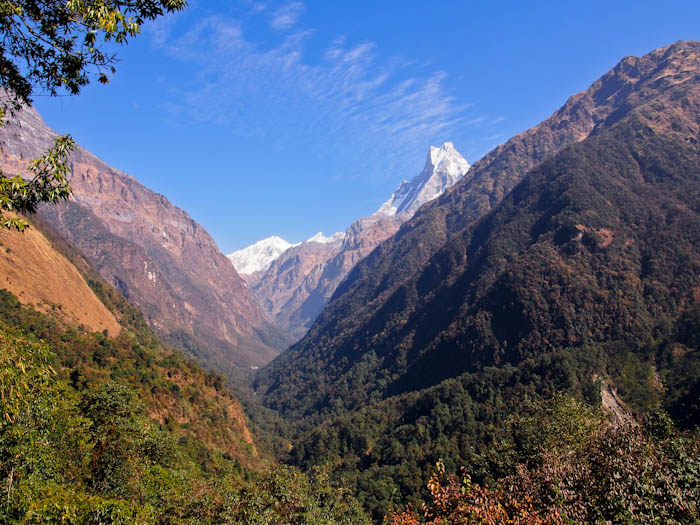 The trekking days so hard had been fairly short, ranging between 4-5 hours, but the trick here is to pace yourself. Of course we could have gone further each day, but that would have come with an added risk of altitude sickness, so we had to be careful especially with Dave already showing himself to be prone to altitude sickness.

While the days are not exhausting and you could keep going, it is best to slow down a bit, and not rush to the next village or guesthouse. I liked to slow down, take out my camera snap a few photos. I knew there was nothing waiting for us in the guesthouse and there was no reason to get there any earlier than we needed to. 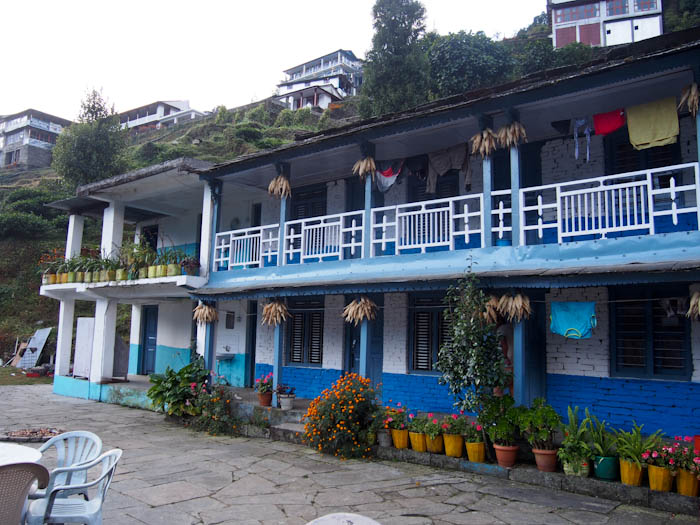 Day four was our shortest trekking day, taking us only 3-4 hours to get to Deorali from Doban. 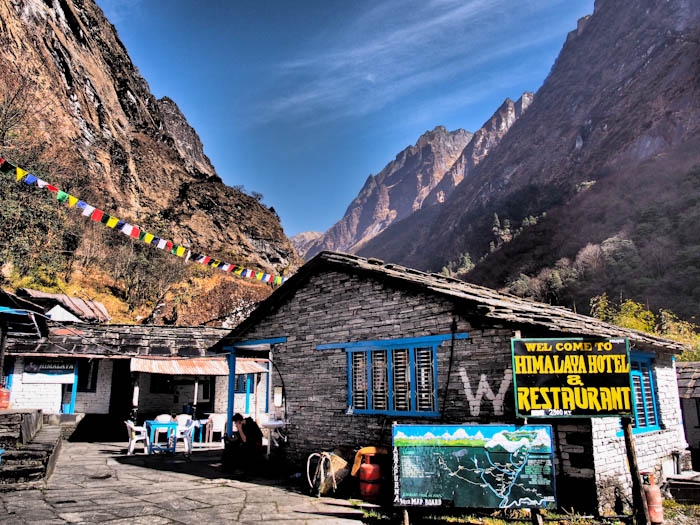 So we spent the afternoon huddled together in our sleeping bags and blankets watching movies on our laptop. 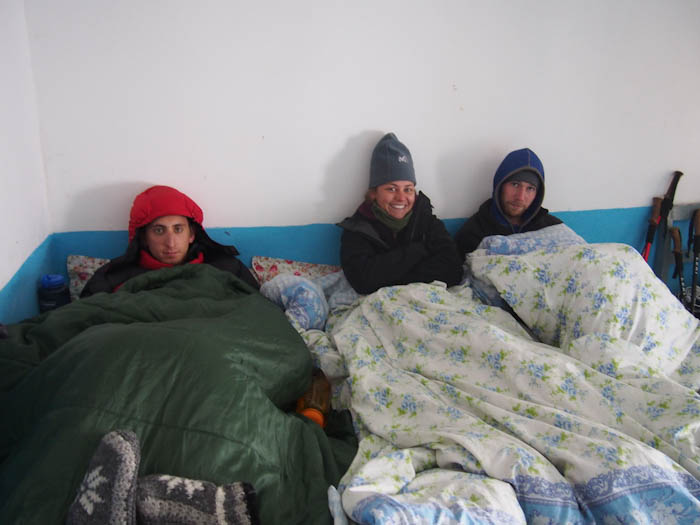 In case you can’t tell already there is not heating in the rooms so the rooms are absurdly inhumanely cold at times. When you’re trekking during the day and the sun is out, it can be warm enough to trek in a t-shirt, but boy do those guesthouses get cold.

Day five was our big day. This is when we would reach Annapurna Base Camp. Would we make it? Would Dave make it? So far no altitude sickness symptoms experienced so already a good sign.

It was only a two hour hike up to Machapuchare Base Camp and the views are magnificent all the way. 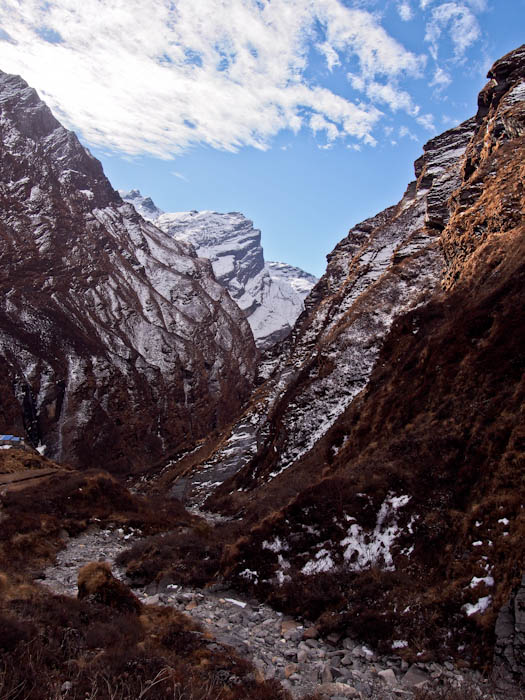 As we reached the lodges we quickly dropped our bags and made a run for Annapurna Base Camp – we wanted to get there before the mid day clouds rolled in and obscured the mountains views. 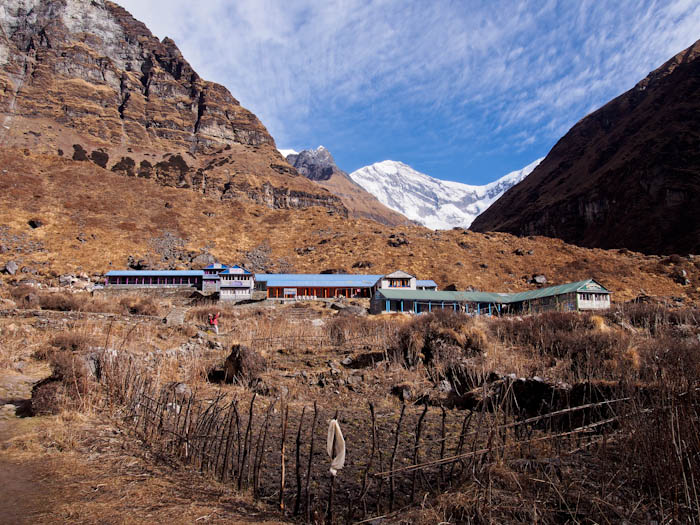 We got there only an hour later and witnessed the most gorgeous views. 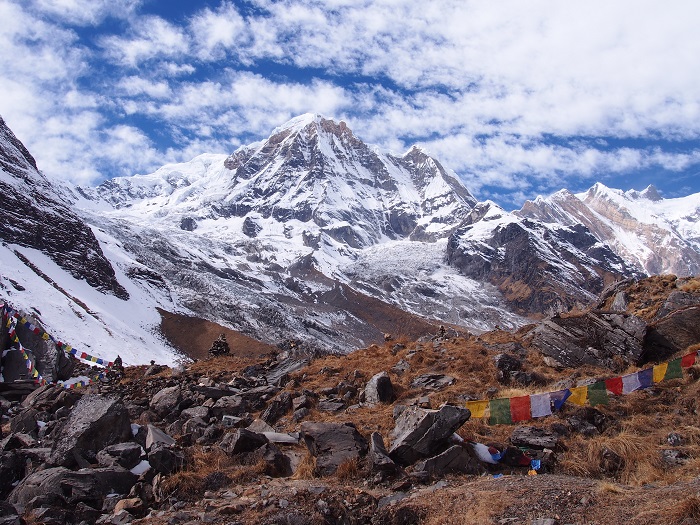 We had all finally made it!

With the mountains all around you and can’t help but be taken aback by the size of everything. I’ve never felt quite so small as I did right there, staring up at the snowy peaks around me. 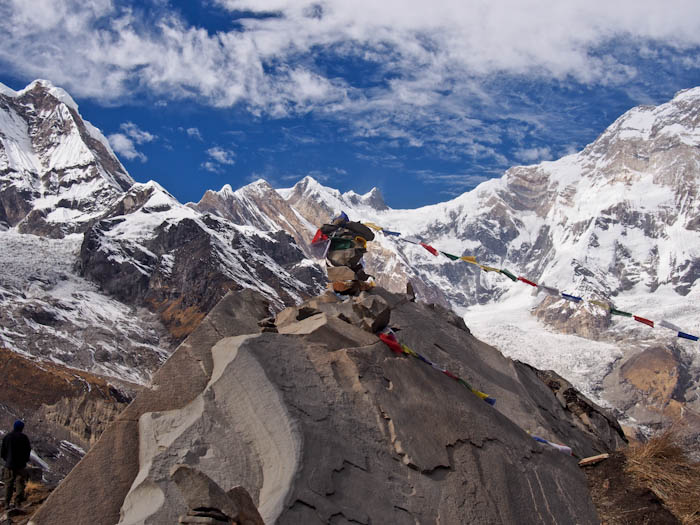 What nature can do truly is breathtaking. 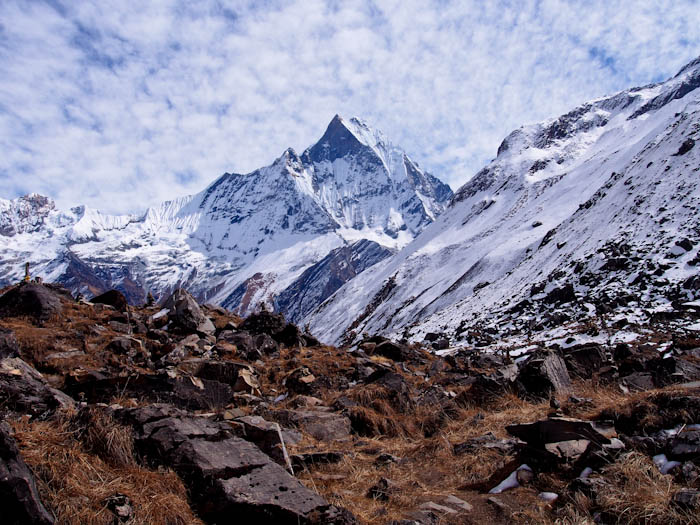 As the boys headed back to the other base camp Susan and I ventured further, not wanted to leave this mountain paradise.

I could have just sat there for hours, trying to scan my eyes over every inch of the mountain. 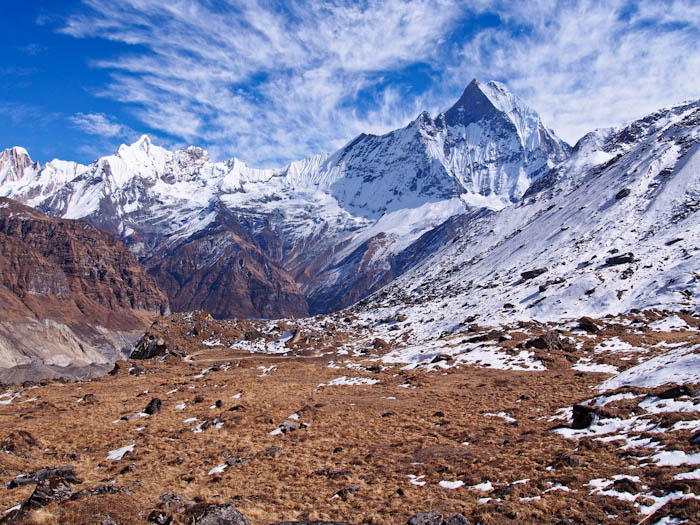 As we made our way back to the other base camp for the night, I truly felt on top of the world. Breathing in the mountain fresh air and gazing out at the unreal landscapes before you, really put me in the best mood of all.

The following day was to be our longest day yet. In one day we covered the same distance we trekked in 3 days on the way up. We wanted to get all the way back to Chhomrong and it took us a full 7.5 hours.

Our legs were all hurting by the time we plopped down on the beds for the night.

The trek wasn’t over yet though. We were taking a different route back down, with a side trip to Ghorepani, to see the famed sun rise over Poon Hill.

Now I’m not one for sunrises. I generally find them to be a bit over rated and you have to wake up at an ungodly hour to catch them. I’m more of a sunset person.

And on our way to Ghorepani, we did catch a great panoramic view of the mountains already. 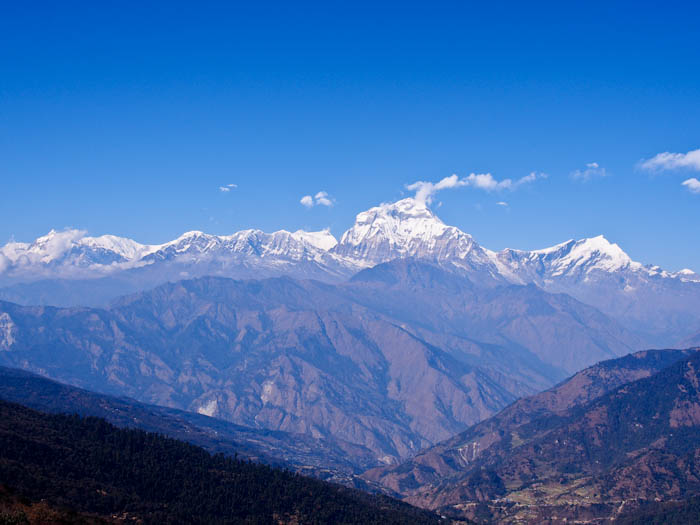 Dave had already announced that he was not going up for sunrise, and I was thinking of throwing in the towel with him.

This is of course until we met a fellow trekker, Ari, who said she had heard that this sun rise would really be magical. Ugh, why did she have to throw the word “magical” in there?

With that I was in. I hate to miss out on magical moments, probably more so than I hate missing out on precious sleep.

So the following morning, in the dark, with our headlamps on, we made the hour long walk to Poon Hill to catch a glimpse of this magical moment.

What is really magical? 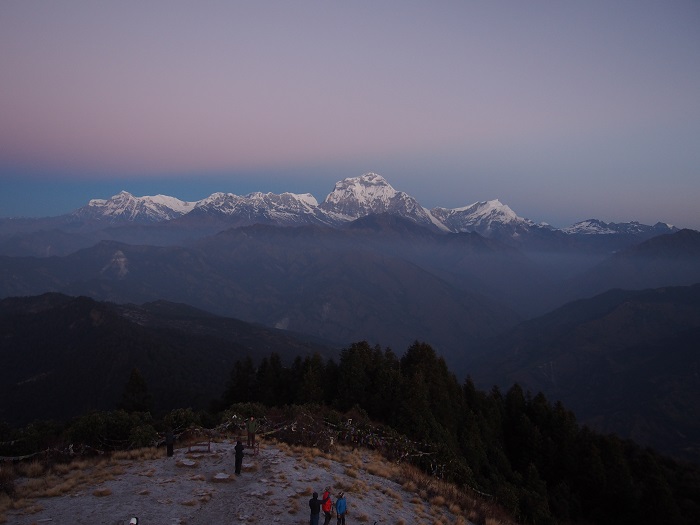 Eh. Can’t say it was but I do have some good photos to show for it. 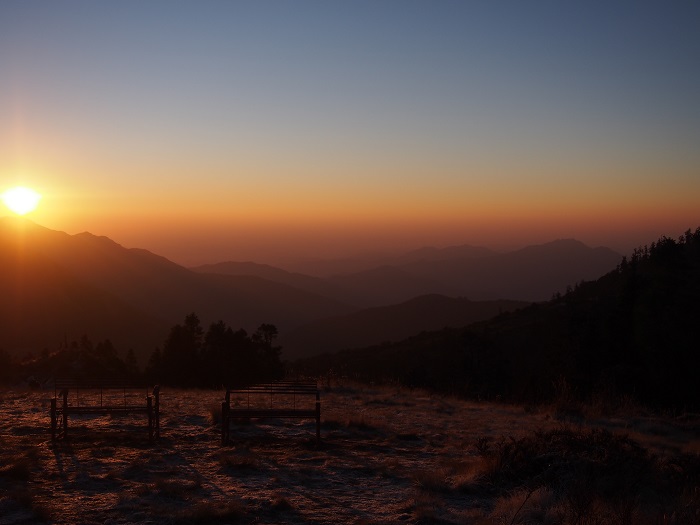 The day of the sunrise was our last day of trekking. We made it all the way down from Ghorepani to Nayapul in 6 hours and then caught a bus to Pokhara.

Overall I had an incredible time on the trek and it was the first time in my life I did a multi day trek and I really enjoyed it. With good company and great views how can you go wrong?

Though on the other hand I was perfectly happy to be done in 9 days and to finally return to heated rooms, hot showers, and good food.

For anyone heading to Nepal though, consider doing the Annapurna Sanctuary Trek, you won’t be disappointed.