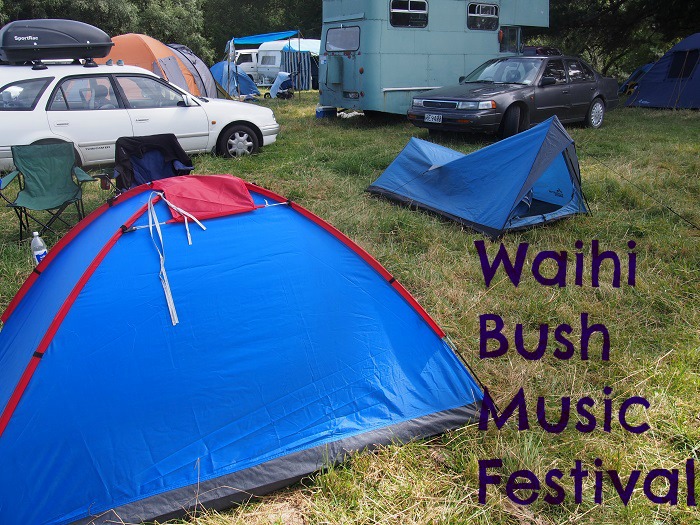 In all my 25 years I had never once been to a music festival.

It was time for that to change.

That’s where the Waihi Bush Music Festival comes in.

We flew in to Christchurch, New Zealand from Australia and met up with my friend Susan and her cousin Paul (our trekking buddies from Nepal). Since they had already been in New Zealand for a month, we left all the planning up to them.

Finally I could take a break from figuring out all of the logistics.

Since they were fairly trekked out after Nepal and New Zealand, a 3 day music festival not far from Christchurch seemed like a good way to throw in some variety.

How could we say no?

Described as the most laid back festival in New Zealand, a family oriented Folk music themed affair, Waihi Bush sounded good to me.

We knew we were unprepared but we failed to let that stop us. Dave and I had sent our sleeping bags back home with my parents and naturally we don’t travel with any other camping gear.

Susan and Paul on the other hand, had sleeping bags and a camping stove and secured themselves a discounted $25 children’s single tent at the hardware store. Oh and then we splurged and bought 2 foldable chairs for the 4 of us. We’d sit in shifts.

With the car loaded up with hundreds of dollars worth of food, snacks and booze we were ready. 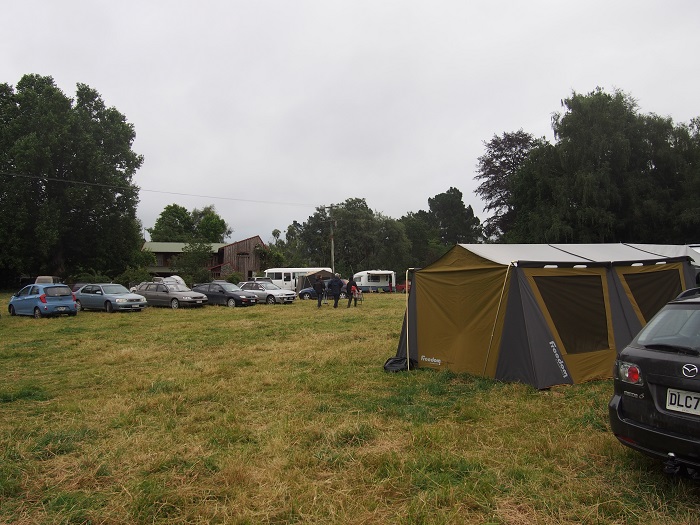 As we pulled up to the farm, we noticed people had already started to trickle in and set up their massive camp sites. I’m talking tents the size of mansions.

Our little spot looked pretty sad with one children’s tent and two chairs for the four of us.

The hood of the car would serve as our kitchen. Our bedroom would be the two front seats of the car.

Eventually we made our way over to the main stage and enjoyed the first folk music concert of the day before heading over to the bon fire for more singing. The setting was very casual with a small stage with a tent and people setting up their own foldable chairs. Lots of families with kids running around too. 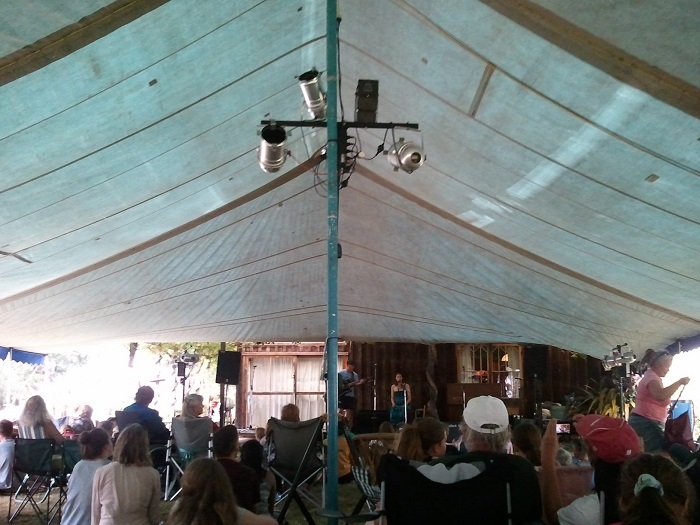 Not the type of music festival where everyone’s in a drug induced state of euphoria. More like good clean fun.

By the end of the night I was already having a blast. A peaceful outdoor setting, pleasant music and good company; not bad.

Though when early morning rolled around I was not a happy camper. Who knew sleeping in a car would simply be just about the most uncomfortable thing ever? How did I not know this before?

Aside from the fact that neither Dave nor I had pillows, blankets or jackets, and could hear our teeth chattering from the cold throughout the night, there was just no way to get comfortable in the front seat of the car. Oh and then when the sun came up the temperature in the car quickly changed to unbearably hot, as if we woke up in a sauna.

Luckily all my loud complaining about a fitful night’s sleep paid off – a guy from the neighboring campsite came over with a spare tent that he didn’t need. Score. 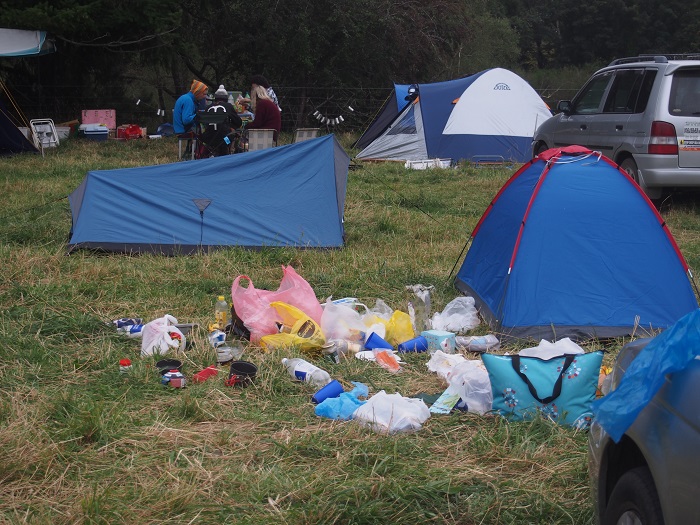 Now if only I could find some sleeping bags too.

The day passed by lazily. We lounged around on the grass listening to the performers, walked around the various workshops, ate, drank, and generally just hung around. Best thing to cook at a music festival? Couscous. Seven minutes and it’s ready to be mixed up with all the no cook ingredients (basil, sun dried tomatoes, pesto, tomatoes, artichokes, scallions, etc). No time for complex meals when there’s music to enjoy.

There was no internet connection or cell phone service to think of and I truly enjoyed the opportunity to fully disconnect from technology.

It’s so easy to constantly be running around, thinking about a million different things and just feel overwhelmed. At the festival I felt none of that pressure. I just felt completely relaxed, not thinking of anything but just lounging around listening to music.

It honestly felt nice to not really have anything to do. And it didn’t hurt that I was enjoying both the company and the music.

Things got a bit more lively on the second night. 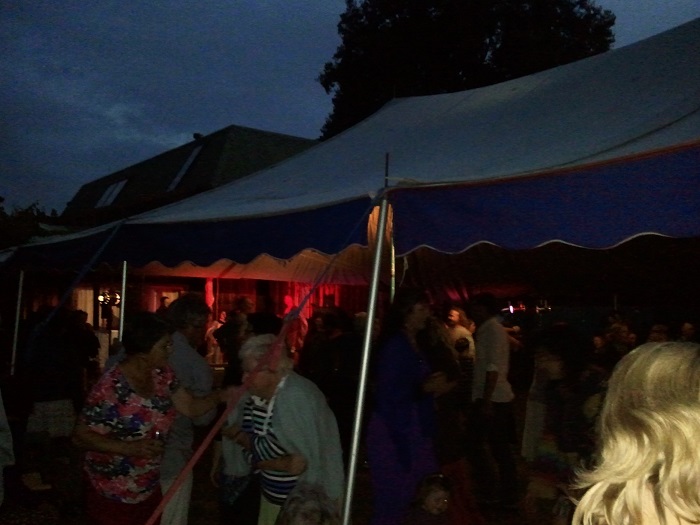 It was the night of the barn dance. In case you are not familiar with this form of dancing, generally a large group of people get together and all dance in a coordinated fashion (think square dancing). There’s switching of partners involved, doseidooing, holding hands, spinning around. Basically a jolly good time.

I was having the time of my life; laughing until my sides hurt. There was the dance leader, running us through the moves and gives us time to practice before the song came on and the dance started. The music was upbeat, the people were all friendly and the dancing was simply hilarious. I haven’t laughed so hard in a long time.

Sadly I didn’t capture this in any photos or videos; I was simply too preoccupied living in the moment and taking it all in.

In general I took very few photos at the music festival – I really just wanted to fully immerse myself in the environment and not have to step back to see it all through a camera lens.

Overall I had an absolute blast at my first music festival. I can’t say I’m a huge fan of folk music, but I did enjoy it in that environment and didn’t get sick of it after the three days. A good tip for next time – come prepared, with at least appropriate sleeping gear and a tent. Sleeping in the car was terrible and even in the tent it was uncomfortably cold without a sleeping bag.

I’m hoping to attend a lot more music festivals in the future.

How do you feel about music festivals? Love them or hate them? Any good ones to recommend?