Volunteering at Mindful Farms in Thailand 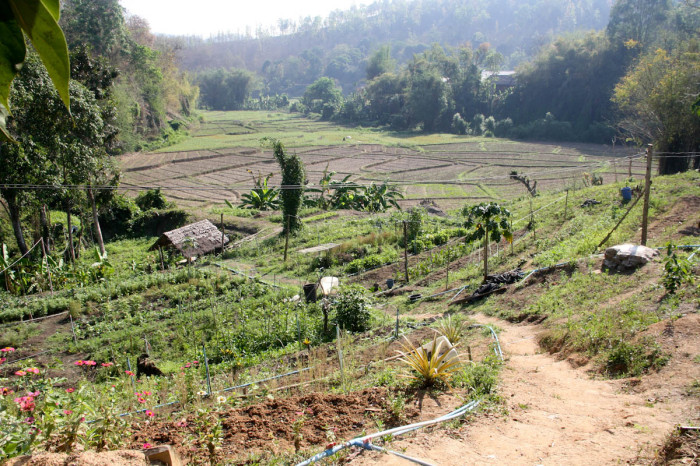 For some reason I thought the idea of volunteering on an organic farm outside of Chiang Mai would be perfect for both Dave and myself. (Later, we realized that it would be perfect for her). I heard of Mindful Farms through fellow travel bloggers Honey Trek and quickly signed up to volunteer for two days.

We saw a gaggle of foreigners waiting at the designated spot and asked if they were headed to Peng Term (where the farm was located) and after a quick nod the introductions began. There was a Finish girl, an Austrian couple, and a Kiwi (throw in a random New Zealander for good measure).

After some bumpy roads through the countryside, we arrived just as my motion sickness was setting in.

We approached the farm but something seemed a bit off, mainly instead of the rolling fields we had envisioned I could only see a plot of small weeds. Where were the crops? Did this farm grow anything at all? 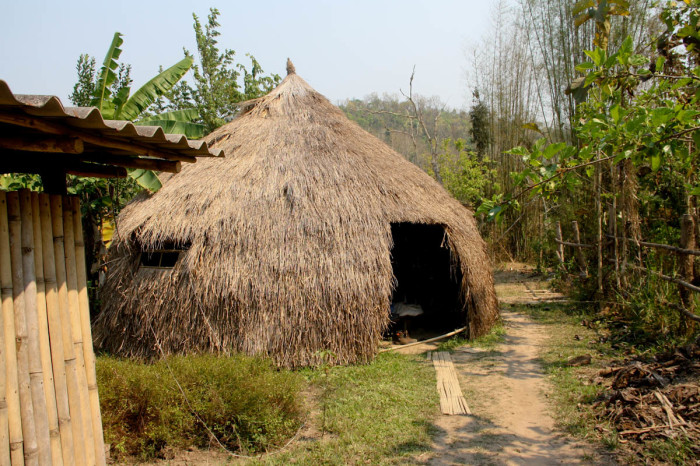 I glanced around and saw a few girls rolling their own cigarettes and slowly drumming away on bongo drums in the living room. With glazed over eyes and tie dye shirts, you could tell they had been there for days and felt right at home.

“What have you guys been doing today?”

They all looked at each other and shrugged, “not too much.”

When we asked what they had done there all the week, the answer didn’t really change. Seemed like they attended a make shift sauna in the woods and cleared off some jungle shrubbery (not exactly working hard). 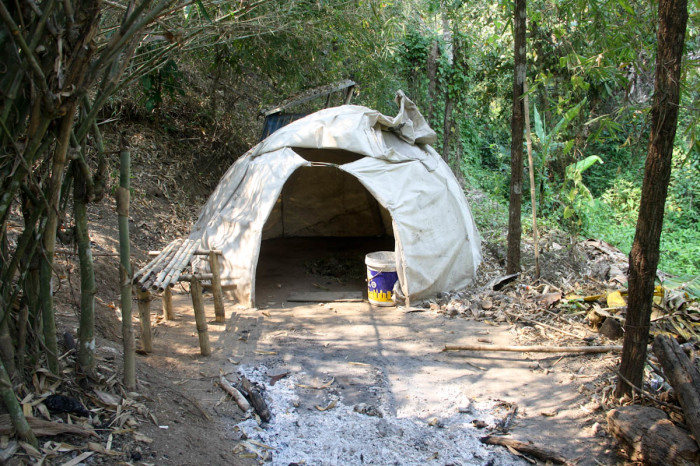 Eventually the farm owner arrived and instantly gave me the heebie jeebies (must have been the dreads). Some people just give me an “off” vibe and I had apparently just walked into a whole house of them.

Did I really just sign up for two days of volunteering on an organic farm where there seemed to be nothing growing and the only allure was the hippy hangout spot?

On top of that, the owners seems to be raising fighting cocks for money instead of growing veggies. (Ugh – seriously?)

To my relief it turned out that we were on the wrong farm the whole time. Instead of Mindful Farms we had wandered into Happy Healing Home without even realizing there could be multiple farms in the area.  Three of us left while the others stayed.

As we made our escape, one of the volunteers who had been there for over two months looked at us regretfully and then said to the owner

“It’s a shame that these guys are leaving but they were lucky to at least see this special place” (Cough Cult Cough.)

From there it was only a short walk to the real Mindful Farm, which simply looked like paradise after where we came from. Rolling green hills, clay hobbit like huts, farm plots with all sorts of veggies and herbs all over the place and most importantly a friendly farm aura. 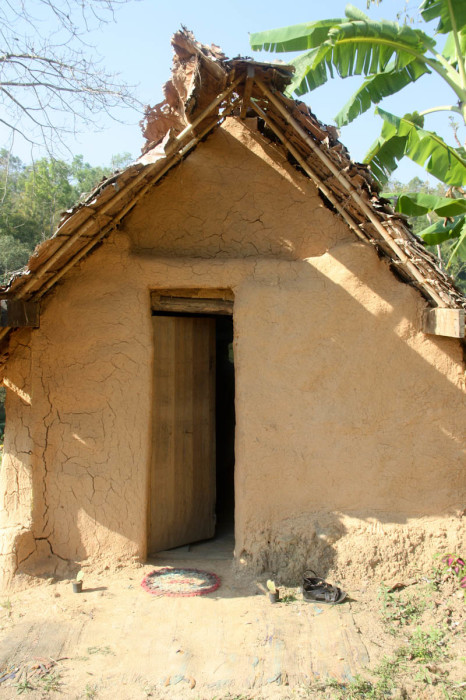 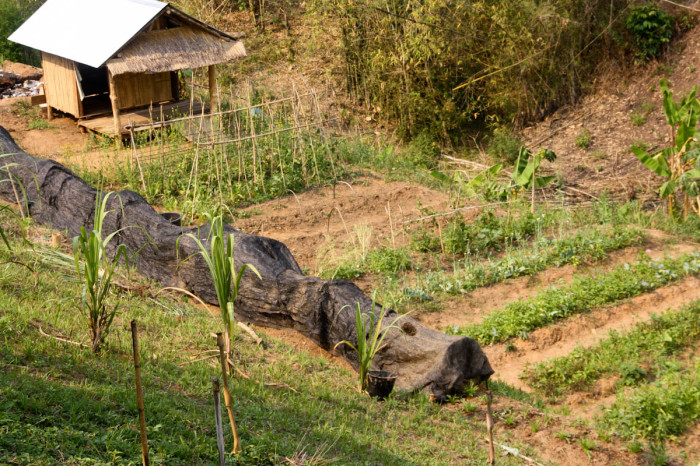 Norika, the owners Japanese wife came out to greet us and led us into the main house for an intro. We bonded over all things Japanese as she told us how she met Penan (the owner) after a meditation retreat in Thailand. She had only come for 8 days but, despite the fact that he had been there for 40 day they just happened to finish on the same day. Love blossomed and Penan gave up his monkhood to marry Noriko (sounds like a fairytale from my childhood). Fast forward two years and they now have a baby and this farm (they’ve been busy). 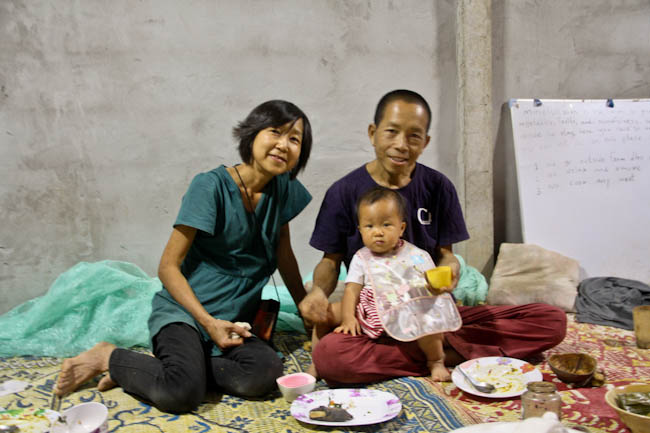 I was amazed by the progress Penan, which means former monk, has made in so little time. There are several buildings and bungalows on the property, with many small plots of land with Japanese veggies growing which are then sold to Japanese restaurants all the way in Bangkok. There is even an automated sprinkler system and electricity (woohoo?). 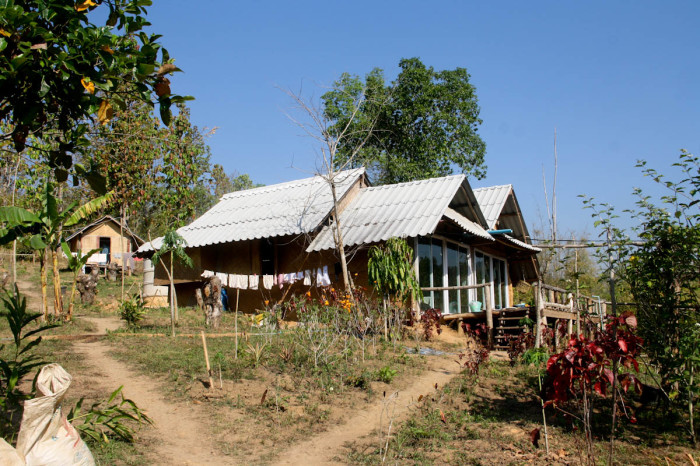 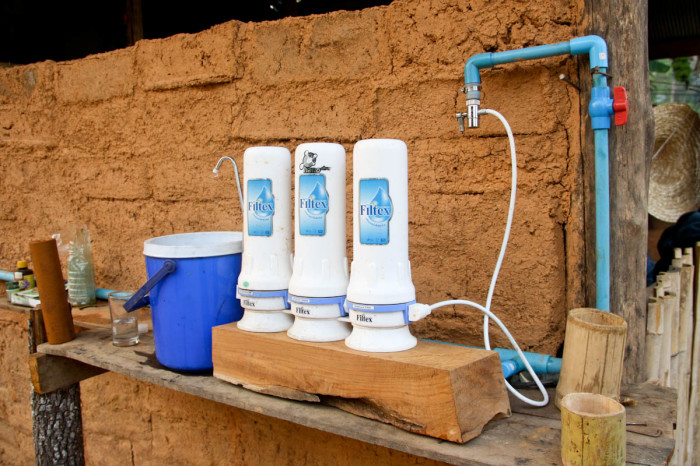 I was seriously impressed (and I was wondering if they had wifi).  During our two days there we participated in daily farming activities with the other volunteers and we became fast friends with Sophie a German girl, Tia and Finish girl and Jantien a Belgian girl.

I learned how to start a fire with magic wood (wood with tree sap) for cooking, and how to do some weeding and got to water the plants. 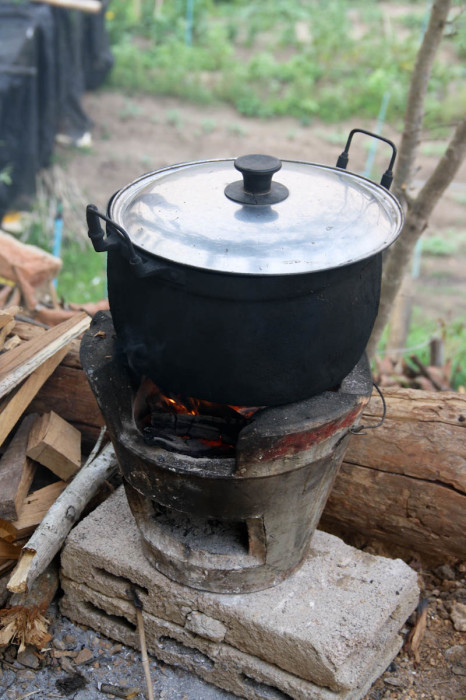 Penan and Noriko run a fully vegetarian farm and all the meals we prepared use fresh farm veggies. The food was simple yet good, and we all cooked and ate together. As is common in Thai tradition we ate sitting on the floor in the meditation hut – something my inflexible legs will never quite get accustomed too. 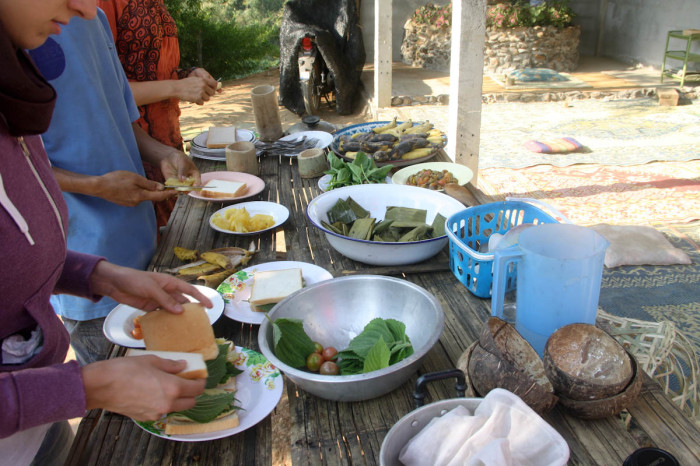 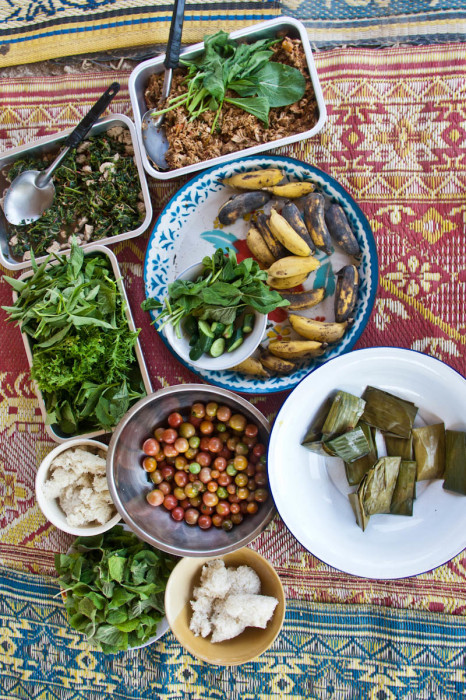 At night there was an optional meditation session led by Penan. While Dave and I tried to participate I can tell it’s going to take a lot more work and learning to get the gist of it. After about 45 minutes when I could no longer feel either of my legs I tried to silently limp out of there.

We’ll have to work on our meditating (or maybe not).

While I can’t say I loved the farm life I fared much better than Dave. Unfortunately Penan assigned him some pretty significant tasks and with this being Dave’s first time on a farm it was a bit too much responsibility for him. When he was collecting herbs for lunch he accidentally ripped out the entire stem instead of just the leaves.

Then when he was adding fertilizer to the plants he placed it too close to the roots themselves, in effect poisoning them. (all and all I think I set this guy back one month in earnings) 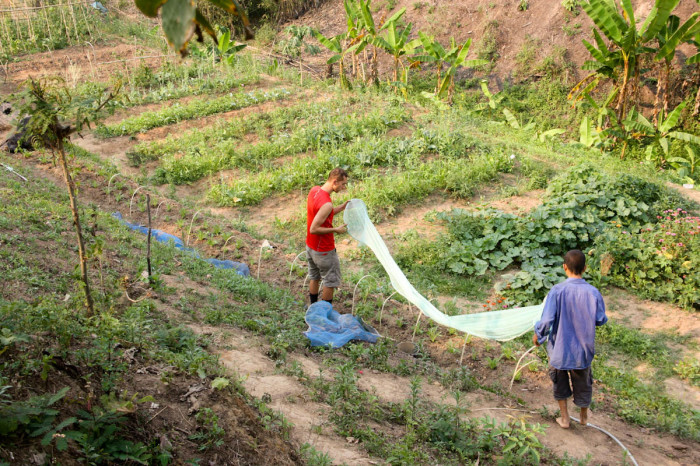 Luckily we left before strike three.

Overall we had a good time on the farm but I don’t think I’ll be able to convince Dave to volunteer on a farm in the near future (ain’t that the truth).

Unlike others it does seem like we don’t like to part from our A/C, wifi and plump beds for too long.

Country bumpkins we are not. 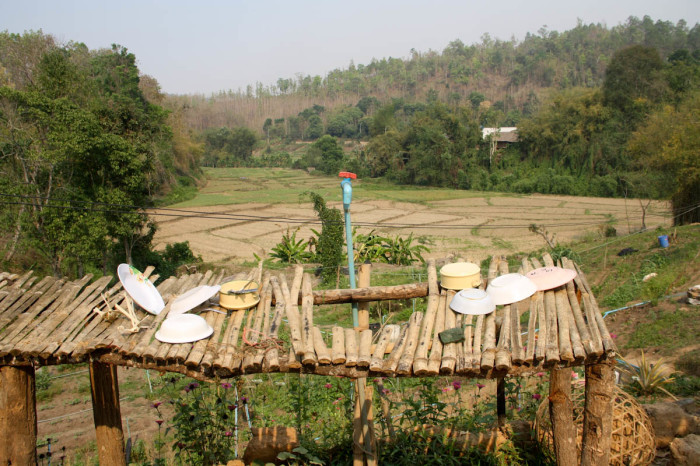 11 Responses to Volunteering at Mindful Farms in Thailand