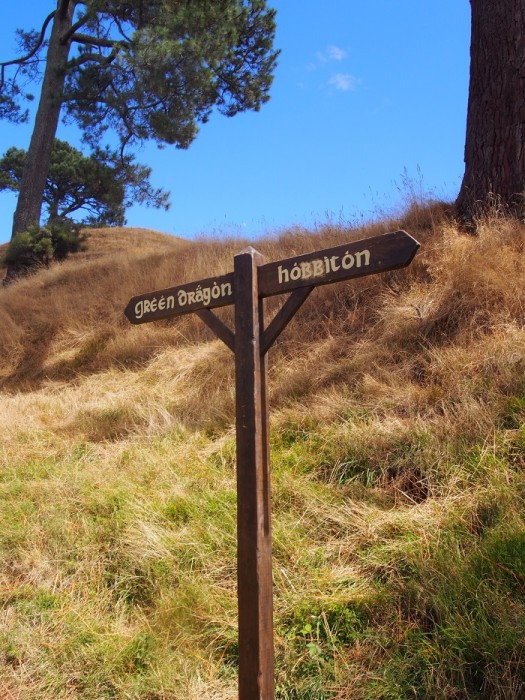 I never expected myself to be a fan of the Hobbit movies. For years I scoffed at the Lord of the Rings trilogy confident that the whole mystical fantasy movie genre was simply not for me.

And then something happened. I decided to open my mind, and give the first Hobbit movie a shot. We were in Thailand at the time and saw it in the movie theater where the fantasy world of the shire really sparkled on the big 3D screen.

I didn’t just like it, I loved it. I couldn’t get enough. After seeing the Hobbit I watched all three of the Lord of the Rings movies and though I didn’t love them like I did the Hobbit, I still actually liked them. A huge shocker for me, really though.

So when we got to New Zealand and realized Hobbiton was a real place that we could actually see for our very own eyes, I needed no convincing. We spent 3 weeks on the South Island in New Zealand but I made sure to schedule in a day on the north island in between our flight to Malaysia so we could rent a car and drive down to Hobbiton.

I was going to make this happen.

The Hobbiton site in Matamata New Zealand is the real set where they filmed the shire for the Lord of the Rings and Hobbit movies.

The set is located on the Alexander’s 1250 acre sheep and beef farm and I’m sure if the hobbits had a say in it they would have hand selected this farm as their home too. 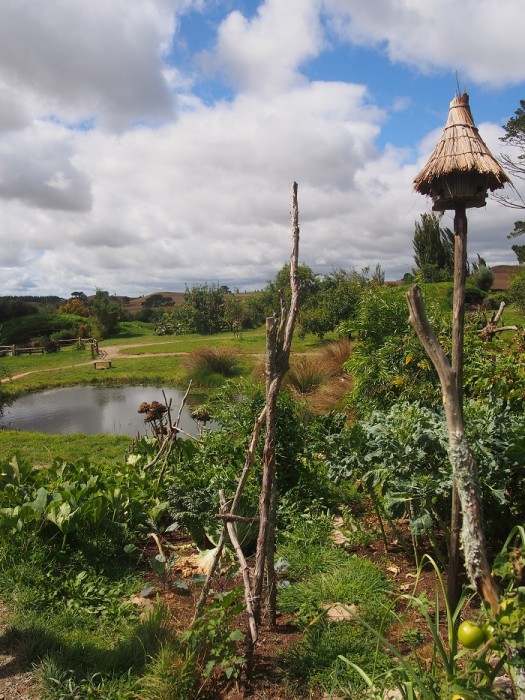 Though the original LOTR set was taken down after the completion of filming, this new set that was built for the Hobbit is now a major tourist attraction and not going anywhere.

You can see the site through a 2 hour group tour which leaves every half hour (coming in at a whopping $63 USD per person). So as we were loaded onto a dilapidated looking school bus, our guide began the tour with a brief intro into the location. 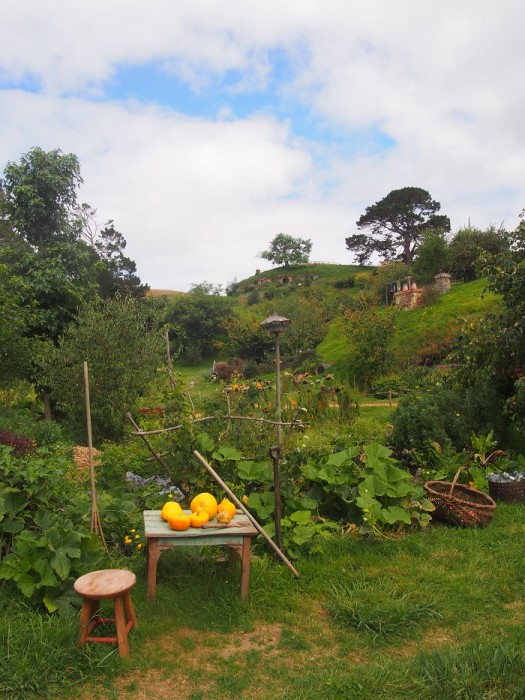 Hobbiton is located on an enormous private farm (with over 12,000 sheep). When the film crew was helicoptering around New Zealand looking for perfect filming locations they spotted a huge tree on the farm and had their heart set on this being the place for the shire to come to life.

As we got off the bus, with all the other eager visitors, the race to take as many photos as possible began, and I might have been in the lead (though our guide told us one woman took over 5,000 photos during the 2 hour tour). 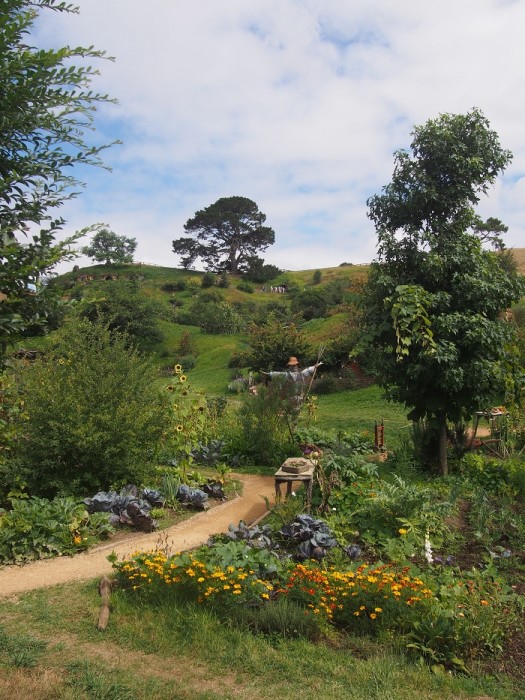 The area is nothing short of magical. There’s just something adorable about miniature objects, houses, tools. I couldn’t get enough of it. I just wanted to lock every inch of the shire into my memory. You know those people who build fairy gardens? Well I’m soon going to be one of them after this visit. 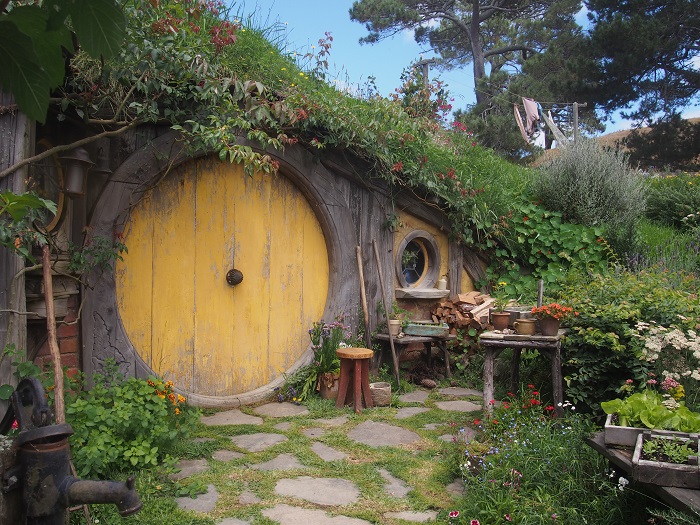 I wanted to live there.

I wanted to morph into a hobbit and turn all my friends and family into hobbits so we could all live there. In those charming little hobbit holes by the hill. 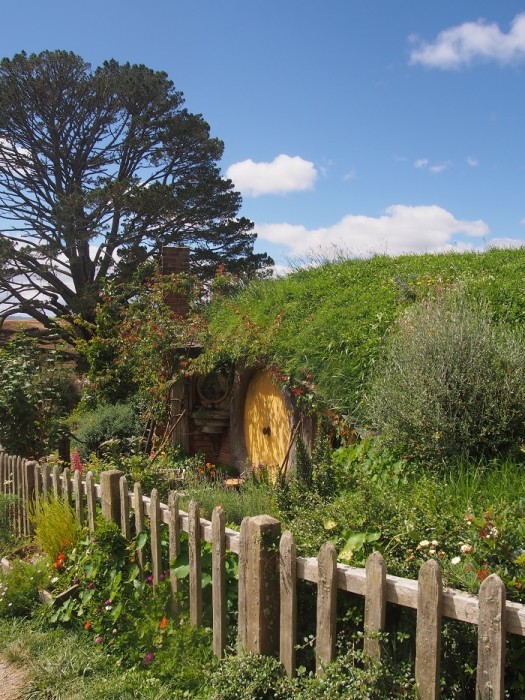 Our guide kept us entertained with a series of fun and ridiculous facts about the movie set. 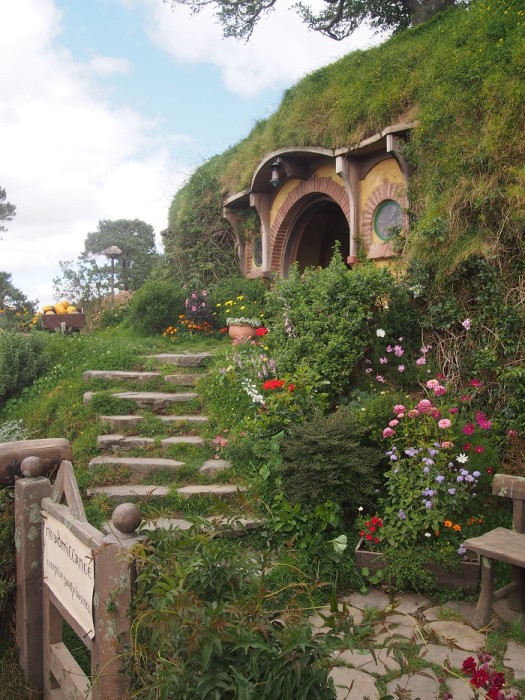 For one, the main tree on top of the hill is not real. Far from it. When they were filming the LOTR they found a tree in a nearby town that they loved, chopped it up into small pieces and drove it over to the farm site and reconstructed it. Naturally it did not survive such a stressful experience.

Without thinking ahead for a future use for the Shire, they tore down the site after filming only to have to rebuild the set years later for the Hobbit. This time the tree was 100% man made. Steel and silicon covered with other materials and painted brown. And then the 200,000+ leaves were attached by hand. 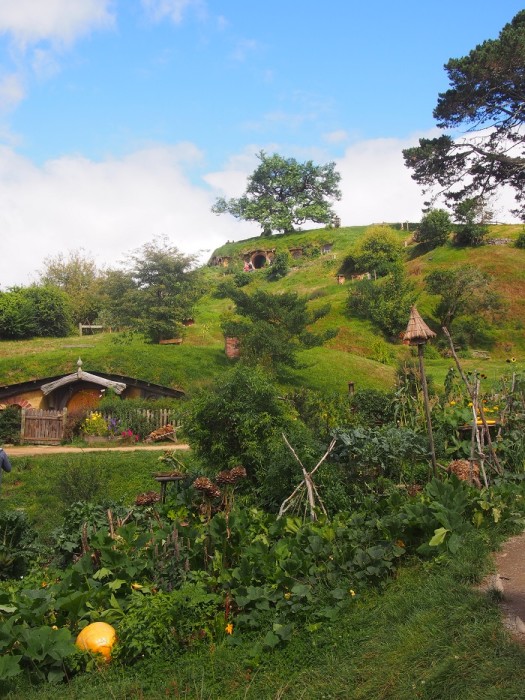 The building of this one tree took over a dozen people a couple years to put together and cost over 1.5 million dollars. Just for the one tree.

Good thing the movie was a hit, right?

Based on where Hobbiton is located, for the sunset scene the crew realized the hobbit holes actually face the sun rising side. And so to film that sequence they did everything in reverse, and with brilliant editing turned that sunrise into a sunset. Hollywood has no limits.

Surprisingly, the vegetable patches and flowers in Hobbiton are all real, and require the constant care of multiple gardeners and other workers. Even years after filming a full time staff takes care of the ground making sure everything is in tip top shape. 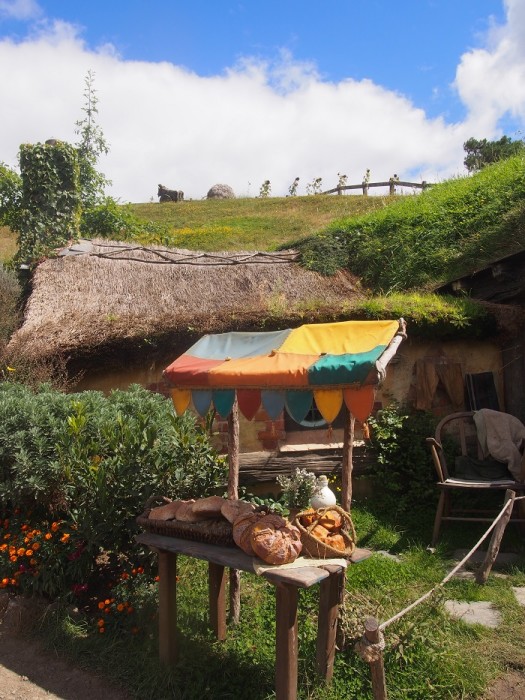 Unfortunately we couldn’t go into any of the Hobbit holes themselves. In reality there isn’t really much inside them. This set was built for all the outdoor scenes. The scenes that are inside the dwellings themselves were actually filmed elsewhere. 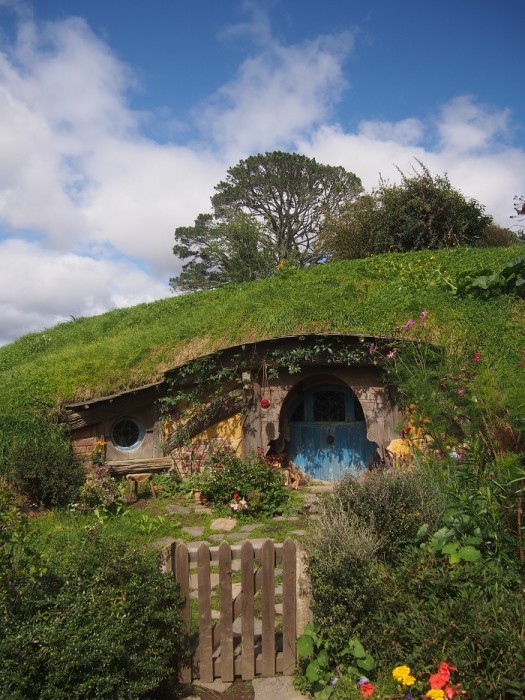 I just let my imagination run wild as I pictured how adorably the inside could be decorated. Don’t you just love that little yard, with the small doors and mini windows? I can’t even convey how happy I was to be frolicking in this fantasy world. 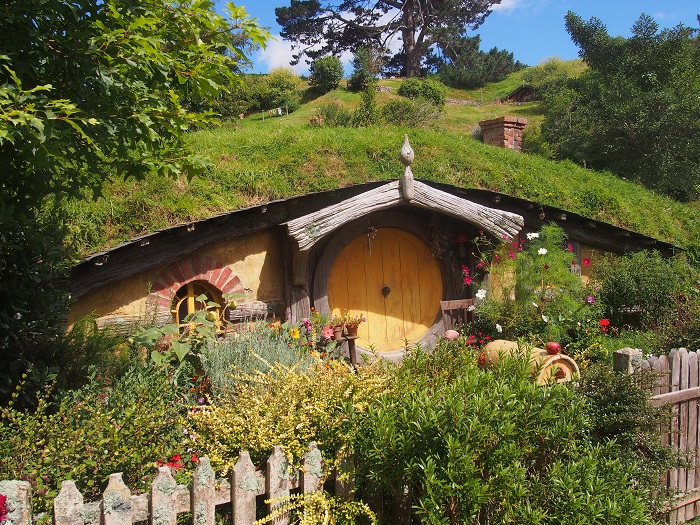 After we made a loop around the various hobbit holes we walked down to the open green field where the party tent was set up for Bilbo’s birthday. 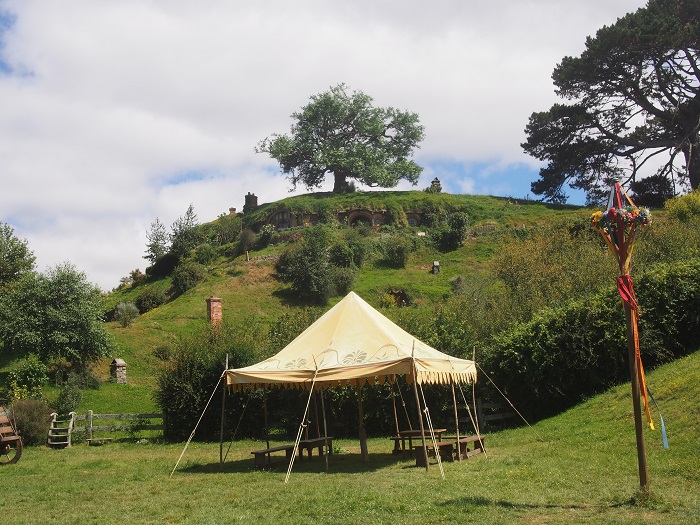 From there we crossed the water to head to the Green Dragon, a replica of the bar and inn from the movies. 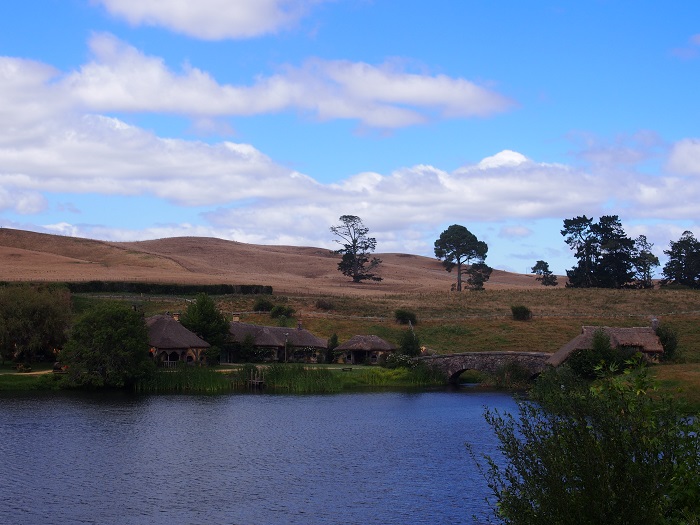 Now this is quite possibly the coolest bar I’ve ever been in. Makes me want to open up my own Green Dragon back in the US. Wouldn’t you want a pint in this bar? 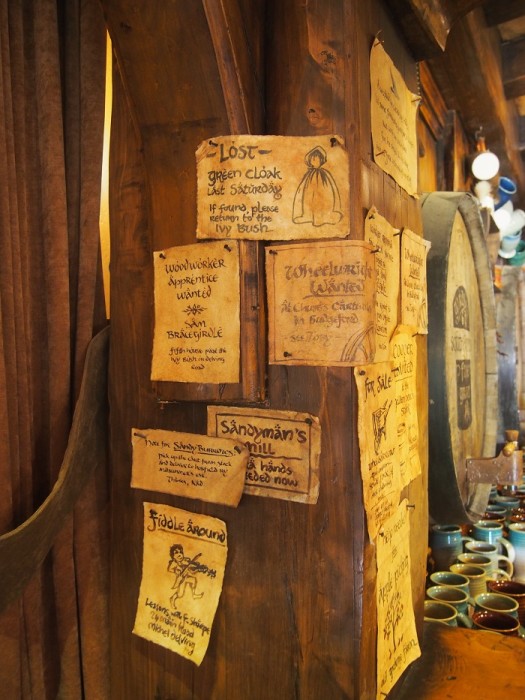 The atmosphere inside is so rusty and cozy. Kind of like ski lodges meets the 1600s. Maybe. 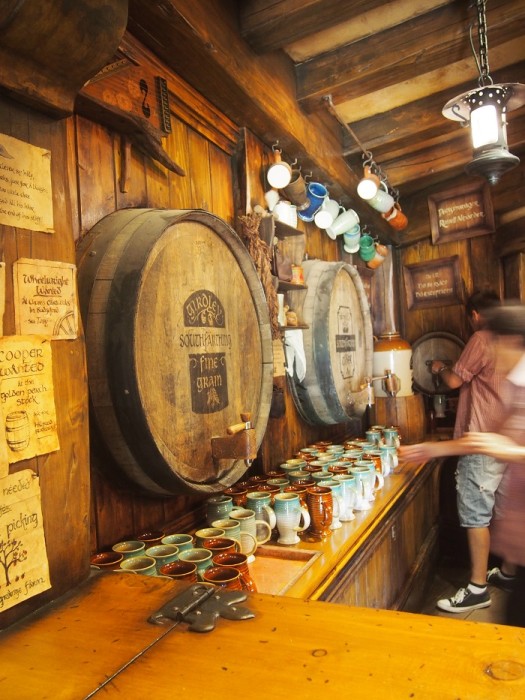 Included in the ticket was a free beer, and you had the choice from four different types (a cider, non alcoholic ginger beer, a amber beer and a dark beer). These are brewed specifically for the Green Dragon and not sold anywhere else is the world.

We enjoyed our beers while exploring every corner of the Green Dragon, making mental notes for when we open our own replica bar. 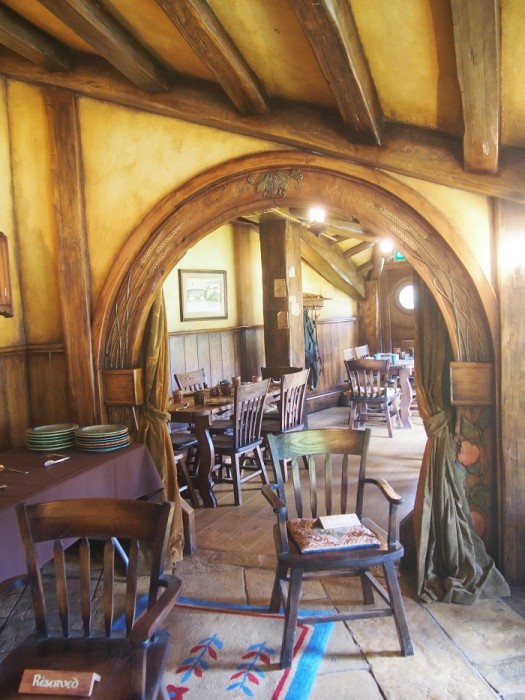 We both loved the tour of Hobbiton and if I lived nearby I would probably try to sneak into the Hobbit holes at night and cozy up there, pretending Hobbits are real.

The set really brings your imagination to life, brings back that child like quality where you can just create magical places in your mind and really derive such joy from it. 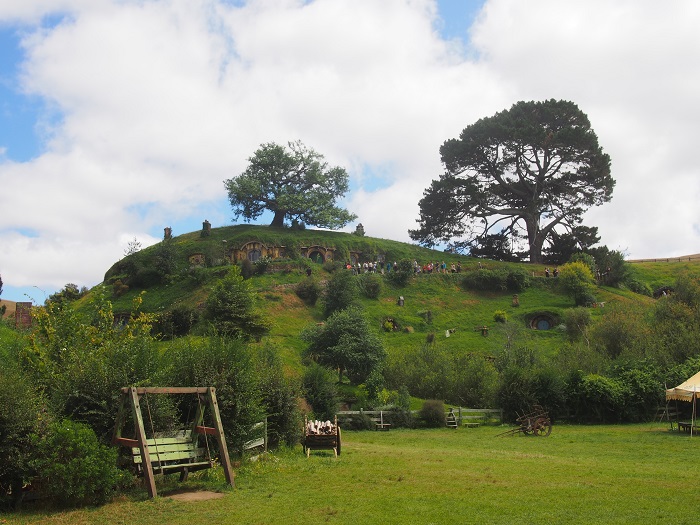 Seriously though, when can I turn into a Hobbit and move in?

Hobbiton is located in Matamata about 2 hours south of Auckland, New Zealand. The easiest way to get here is to rent a car (which is what we did).

Tours last 2 hours and are $63 USD per person, running every 30 minutes from 9:30am until 5:30pm. We booked ours a couple days in advance just to be sure we could get the time slot we wanted.

Though the tours are overpriced we loved being able to see Hobbiton and would highly recommend this to others.