The towering Andes sweeping through Ecuador and Peru provide an “El Dorado” for any high-altitude mountaineering enthusiasts. Most viventura trips in these two beautiful countries pass by a number of stunning peaks. Many times, our customers look up in awe and make a promise to themselves: “One day I will return and climb one of these mountains”. Hence, we want to present our 10 favourite mountain adventures in Ecuador and Peru hereinafter. Let’s see whether we can inspire you to keep that promise…

Ecuador has ten peaks higher than 5.000 metres, eight of which are located in the central highlands and hence easily accessible from the country’s capital, Quito. Most of these impressive mountains are, in fact, volcanoes that do not always demand highly technical climbing, only basic scrambling and ice-gear skills are required. 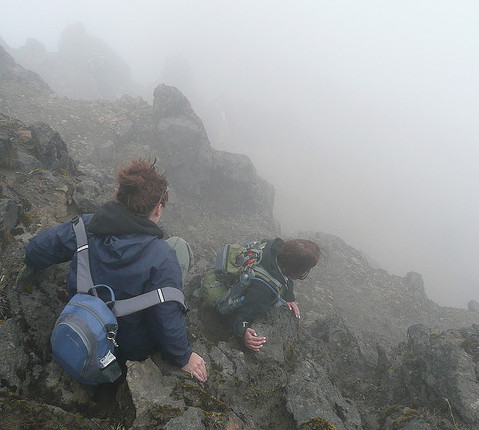 Quito’s closest volcano and landmark mountain is easily accessed a cable car from the city, the “telefériQo” which lifts you all the way up to around 4000 metres. The view of Quito and the Tumbaco Valley is truly breathtaking. From there, it is only a three hours strenuous but technically straightforward climb with only some scrambling at the very top. Rucu Pichincha is a very popular acclimatization climb in preparation for Iliniza Norte, Cotopaxi and Chimborazo and can easily be done in half a day.

Another very popular acclimatization climb is Iliniza Norte – the northern peak of the Iliniza twin peaks which are located just two hours south of Quito. While Iliniza Sur provides a highly technical climb, Norte is much more approachable but still demanding ascent with scree rocky scrambles near the top. Most climbers take two days for the climb: hiking 3-4 hours to the Nuevo Horizontes Refuge on day 1 and getting up early on day 2 for the peak attempt. Most mountain guides use Iliniza Norte as a test to see whether a customer is skilled and fit enough to take the next step and attempt Cotopaxi. 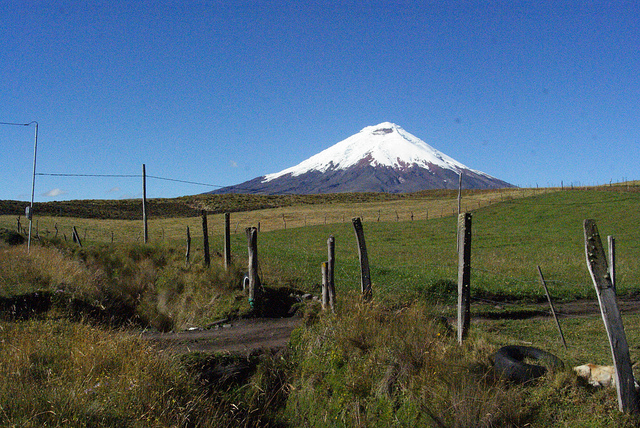 Cotopaxi is definitely among the most majestic volcanoes on this planet. Its symmetrical cone, covered by a glacier on the very top, can be seen from several provinces in the country. Like Iliniza Norte, Cotopaxi can also be done in a two-day climb: it is only a 3-4 hours’ drive from Quito to reach the main parking lot at an altitude of 4.500 metres, followed by hiking for another hour or so to arrive at the Refugio José Rivas (4800m). Here, climbers tend to cook dinner, get prepared and have a quick nap until the ascent starts at around midnight. Although the 6-8 hour climb is not technical, it is physically extremely demanding, freezing, and requires some experience with crampons and ice-axes. But the views from the top – both to other mountains, the surrounding landscapes, and especially into the fuming crater make it all worthwhile. 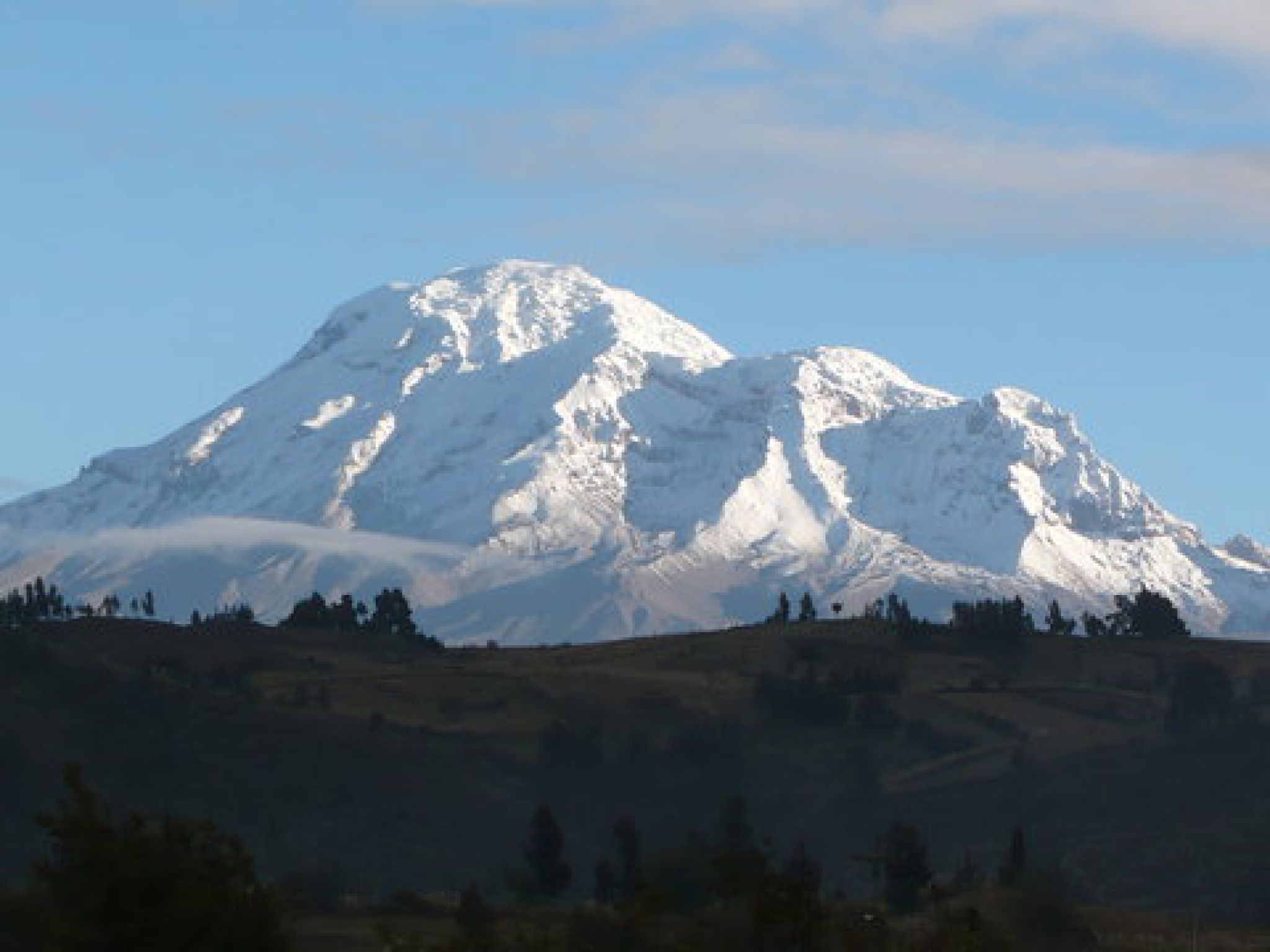 The peak of Chimborazo is not only Ecuador’s highest, but also the furthest point from the centre of the earth because of the equatorial bulge of the earth. Most mountain guides would only accept to climb this extinct volcano topped by a massive glacier if you have accomplished several acclimatization climbs, including Cotopaxi, beforehand. Unlike the other volcanoes mentioned so far, climbing Cotopaxi does require technical know-how and should only be attempted by experienced climbers with snow- and ice-climbing gear. The conditions on the mountain can vary quite substantially from one season to the next, depending on the amount of snow on the glacier and the danger of rocks breaking loose and falling down the volcano. Most parties these days follow the “Normal Route”, which takes eight to ten hours to the summit from base camp. 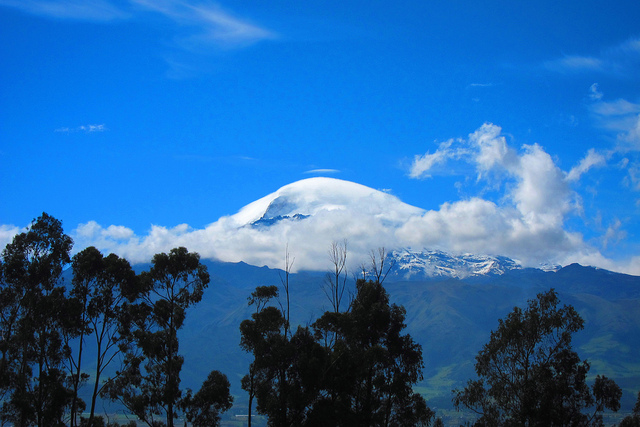 This extinct volcano is Ecuador’s third highest peak (after Chimborazo and Cotopaxi) and also claims the highest point in the world through which the ecuador passes – at 4.600 metres through its south flank. Cayambe is the most prominent peak of the Northern Highlands and can be seen from everywhere within the rolling farmland that surrounds the town of the same name along the Panamericana on the way to Otavalo. The seven hour climb is more difficult than climbing Cotopaxi and requires experience with crampons and ice gear.

Northern Peru has the highest “tropical mountains” in the world, while there is no shortage of heights in southern Peru either. The peaks might neither be as accessible as they are in Ecuador, nor can the quality of guides compete with their counterparts in the north. But the mountains and volcanoes make up for this with their unrivalled and unique beauty… 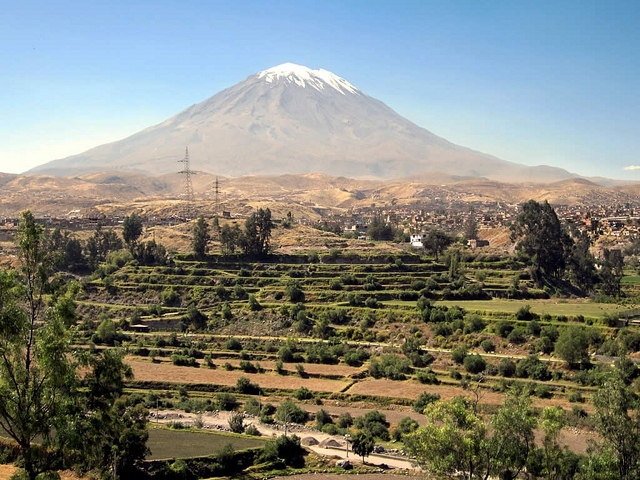 Arequipa’s landmark mountain is probably the most popular climb in Southern Peru. Climbing this perfectly shaped cone is one of the easiest ascents of any mountain this size in the world as it is more akin to a long, strenuous walk rather than actual scrambling or climbing. Nevertheless, it is hard work and requires an ice axe and crampons. There are several routes up Misti, however none is clearly marked. The most popular route starts at Chiguata, from where it is about 7-9 hours to the base camp at 4.500 metres, from where it is another 8 hours return walk to the peak. A 10 metre iron cross awaits climbers at the very top of Misti, combined with great views of Arequipa and neighbouring Chachani. 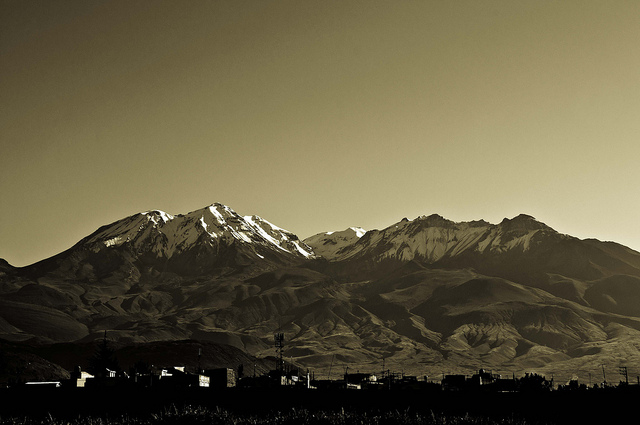 This climb is one of the easiest 6000m peaks in the world, although it does require good acclimatization, crampons, an ice-axe and a good and reliable guide. Chachani is as close to Arequipa as el Misti and is very accessible – the Campamento de Azufrera base camp at 4950m, for example, can easily reached by a 4WD. From the base camp, the summit can be reached in about nine hours, while the return takes about four hours. 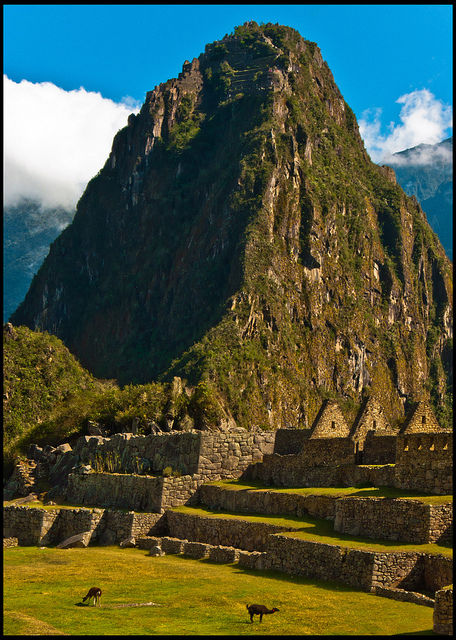 Although nowhere near as high as the other mountains in this list, Wayna Picchu is one of the most famous mountains in Peru, mainly due to its breathtaking view of the ancient ruins of Machu Picchu. Although the ascent is extremely steep, it is not a technically difficult climb and many man-made steps and hand-rails provide for a safe ascent and descent. Climbers need to sign in at a registration booth, and numbers are limited to 400 climbers a day. This climb is an absolute must-do if you have already made it all the way to Machu Picchu! 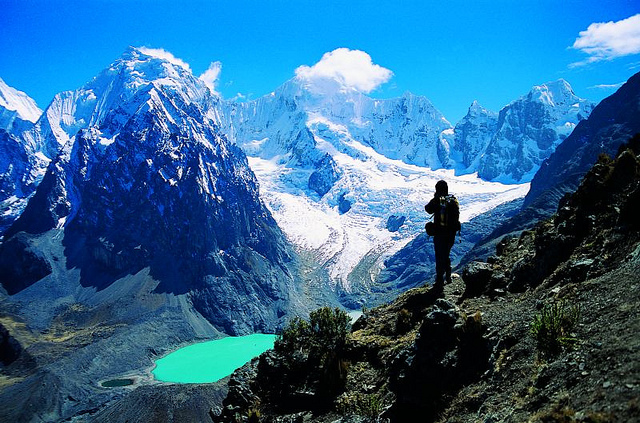 The Huascarán is located in the Cordillera Blanca, an about 180km long and 20km wide collection of toothed summits, razor-sharp ridges, green valleys, cold lakes and crawling glaciers in the North of Peru, with more than 50 peaks higher than 5700m. It is Peru’s highest mountain and, at the same time, the highest pinnacle in the tropics anywhere in the world. Huascarán is a highly challenging climb and for experts only. 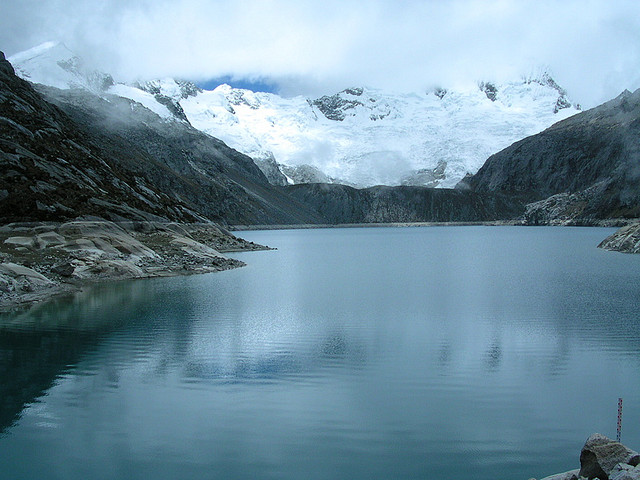 This knife-edged mountain, also located in the Cordillera Blanca, is widely considered to be the most beautiful of Peru, and therefore deserves to mentioned in this list as well. The approach to the mountain is quite tedious in comparison to Ecuador’s counterparts, as its two base camps can only be reached after multi-day hikes via the Santa Cruz Trek or the Alpamayo Base Camp Trek. Six different routes lead to one of the most conspicuous peaks in the world, all of which are considered a difficult climb, demanding good crampon and ice-climbing technique.

If you interested in traveling to Peru, Ecuador or any of South America’s other exciting countries consider taking a small group tour with the South American specialists at Viventura.

Viventura is a tour operator devoted to providing high quality travel experiences in South America. Our tours are perfect for private groups, independent travelers, or solo travelers looking to join a small group.

Viventura tours are designed for travelers, by travelers, and are balanced to include a mix of destinations and activities both on and off the “tourist track”. Our customers are typically open minded individuals seeking vacations that include unique cultural experiences. They embrace the thrill of visiting undiscovered destinations and enjoy a travel style that doesn’t sacrifice comfort for adventure.

2 Responses to TOP 10 MOUNTAINEERING ADVENTURES IN ECUADOR AND PERU