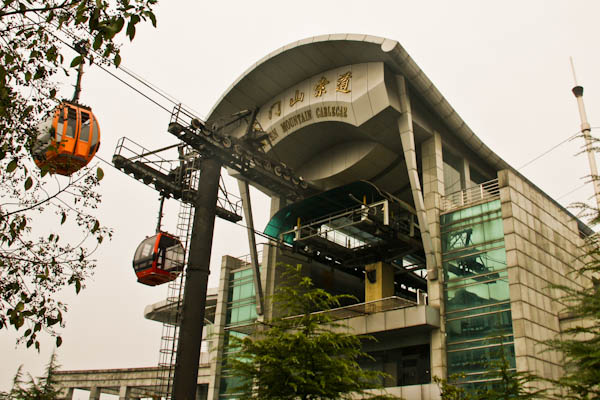 For three, long days we sat huddled around our computers, like barrels on fire, checking the weather, and waiting for that perfect, November day when the sun would shine brightly through the clouds, the temperature would rise above 50 degrees, and rain was not the entire day’s forecast.

But everyday, more disappointing than the last, the weather forecast was the same.

Rain, cold, fog…misery, Armaggedon – these were the words we grew accustomed to.

Until finally, one Saturday afternoon, with only a 20% chance of rain, we ventured out from our holes to nearby Tianmen Mountain.

We generally avoid taking cable cars entirely and opt to hike both up and down mountains, such as the Great Wall, Huangshan, etc, but on this occasion we folded. It was, after all, included in the price of the ticket, which, at 258 yuan ($41) was our biggest entertainment splurge to date. If I could, I would ride that cable car a dozen times, just to get my moneys worth – and what a cable car it was! The longest cable car in the world (a whopping 7.5 km – that’s 4.5 miles for you Americans) we knew this was the appropriate occasion to indulge in a little luxury.

The benefits of going in off peak season? We had the cable car all to ourselves, and for 25 minute ride before us we sat back, relaxed, and enjoyed the view…

What we hadn’t considered was that even with the rain gone, the fog did not subside, not even for a minute. We eerily glided up the mountain surrounded by a cloud of mysterious, thick white air, with no indication of how high up we were or how much longer we had to go. A tad frightening to say the least.

I tried to stay optimistic.

This made the experience more exciting and unique.

I bet no one else gets this sort of “view”

At the top it will be different.

All the while keeping my fingers crossed that the fog would dissipate by the time we reached the top. 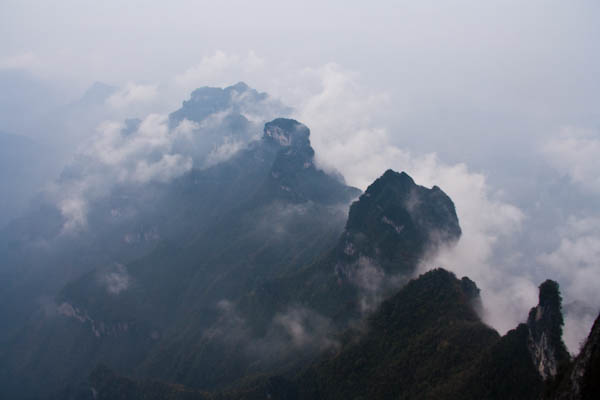 As we got off the chairlift visibility was still limited. Three days sitting around, twiddling our thumbs, and for this? We ventured onward anyway. Taking the West Line, which included the famed glass plank walk, we made our way through winding cement walkways hugging the cliff face.

Visibility wasn’t sharp but it wasn’t enough to totally quell the experience. What a small dot on the world we all are! Adrenaline was pumping. Dave’s legs were shaking. Sure, we had hiked up to 1864 meters at Huangshan and stared across the vast emptiness of China, but somehow, as we looked down through the perfect transparency at our feet, this plank road was significantly more exhilarating. 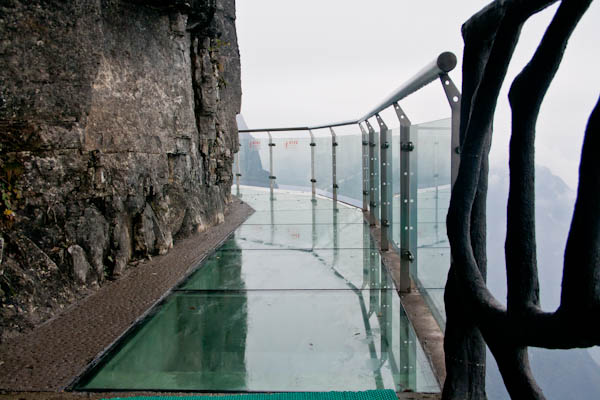 The big attraction for me? The glass plank walk. 600 meters of glass walkways 1000+ meters from the ground. I love it. 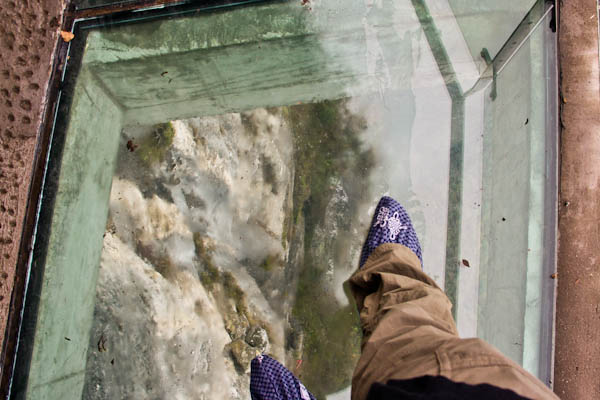 Those are not my shoes – those are the reusable slippers they make you put on!

Pay the 10 yuan entrance fee, put on your re-usable slippers, and off you go. At a snail’s pace Dave trudged along, while I teased him with threats of jumping up and down on the glass. Probably not the best route to take if you are afraid of heights.

At the end of the West Route you’ll find a 500 year old beautiful Buddhist temple complex, strangely devoid of monks though. They were not down for the hike, I suppose.

We wandered around, staring down the intimidating male temple protectors across from us.

Low on time, we were forced to forgo the East Road, which circles the other side of the mountain and opted for the Middle Route instead. After a short while we had reached Fairy Peak, Tianmenshan’s true summit. And after all our trials and tribulations, what were we rewarded with? 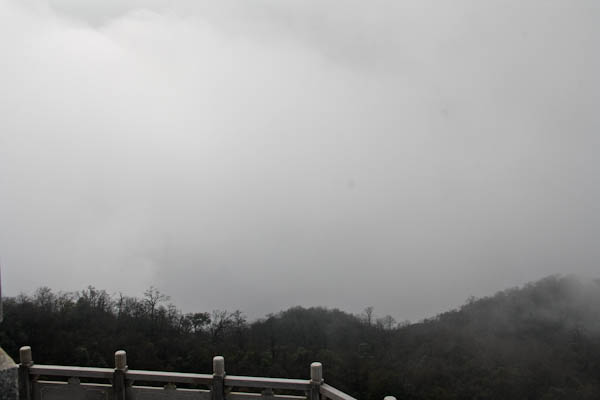 I wish I could say I was surprised. Apparently the fog gets thicker later in the day.

Still, there was more to come. Tianmenshan means Heavenly Gate mountain, named so for the cave halfway up the mountain said to be a gate to heaven. Tianmen Cave has been the site of numerous escapades such as airplanes, men in flying suits, and even the walls have been scaled by a bare handed French rock climber. We descended to the middle cable car station, hopped on a bus, and made our way through the 99 hairpin turn road up to the mysterious cave. 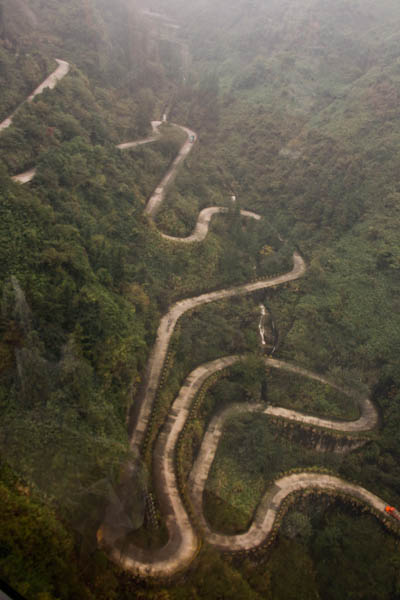 Not for the weak stomached – AKA not for Dave. Thankfully the 99 turns start from the bottom though, so we only had to endure 39. Dave survived though, a bit woozy by turn 27 or so.

The foot of the cave marks the beginning of the famed 999 steps to climb to the top (yes, 9 is a lucky number in China). Surrounded by Chinese tourists we exchanged huffs and puffs on the way up. All decked out in our sports gear we couldn’t imagine how some of the Chinese made their way up in heels, tights, dresses, and full on business casual attire. Is there a club at the top or a cave – perhaps I’m mistaken?

Hidden behind the fog, of course. Bad day for cave viewing as well apparently. 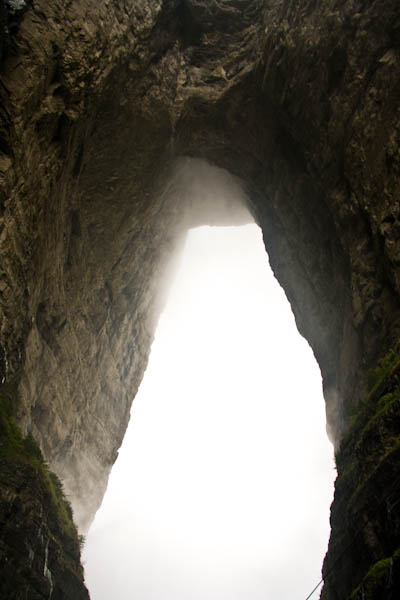 Dave was ready to bolt down another 999 steps after this most recent disappointment but I insisted that we wait. After 15 minutes the clouds parted and we were able to at least see the outline of the cave, though not the top of it.

With the visibility not improving anymore we made our way down. At the bottom we found photo bench where you can have your photo taken.

On a perfect day the sight before you is this: 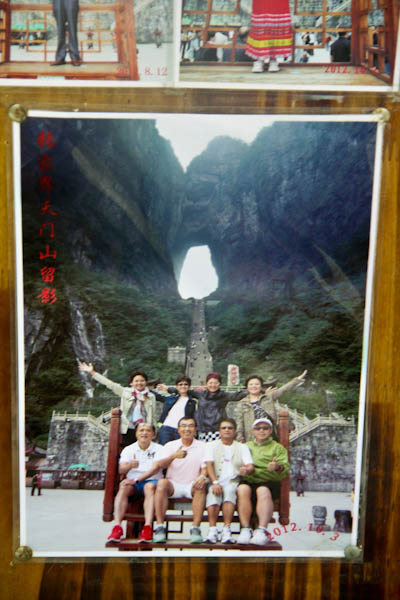 On the day we went, we saw this: 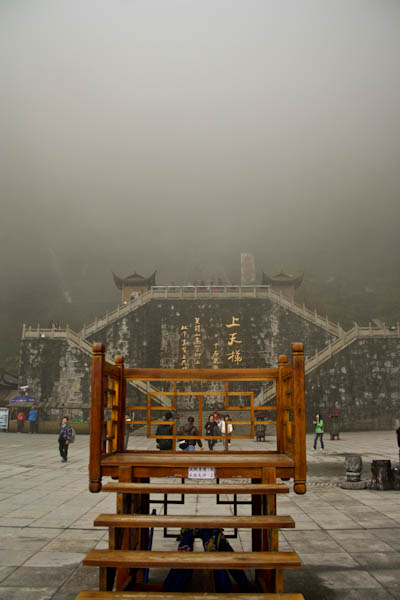 Where’s the happy, Chinese family in the second picture?

Terrible visibility aside we still enjoyed our time at Tianmen mountain and highly recommend spending a day there. The 258 yuan ticket price is steep but it includes the round trip cable car ride, admission to the mountain, temple complex, cave and free uses of the buses. 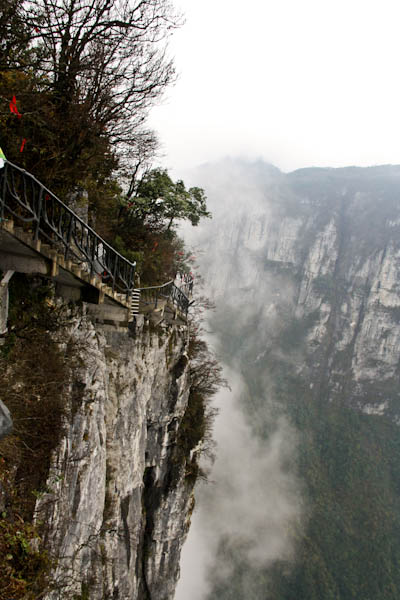 On a clear day the views will be spectacular but even with the fog there is an air of mysticism (or so we tell ourselves).

Fun Fact: “About seventy or eighty years ago, standing at the south pier by the riverside in Zhangjiajie city, one can see clearly the grand and wonderful Tianmen Cave. However, today in the same place one can only see the mountain rather than the cave; and if one wants to see the wonder, he has to go to Dayongqiao Park four kilometers away. Is this really because of slow and secret turning of Tianmen Cave from north to northwest direction?”

Tickets: 258 yuan with discount student tickets if you are under 25 for 183 yuan (tickets include round trip cable car, admission to temple, cave and buses on the mountain)

The cable car takes 30 minutes (20 minutes to middle station, and 10 minutes from there to the upper station) 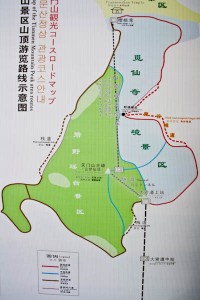 Take the West Line (marked in red on the map) to get to the glass plank road and from there continue walking to the temple. If time is limited take the Middle Line (in blue) to the Fairy Peak and then down to the upper cable car station, or take the East Line (brown on map)  all around the mountain instead.

There is another cable car at the top, from the temple to the upper station of the cable car but this costs an extra 50 yuan.

Take the cable car to the middle station and get off there to board a bus for a 15 minute ride to the Cave. Climb the 999 steps up to the cave which should take 15-20 minutes.

We spent a total of 6 hours on the mountain (including the cable car rides); 3-3.5 hours walking at the top and 1 hour at the cave

7 Responses to Battling Fog at Tianmen Mountain in Zhangjiajie