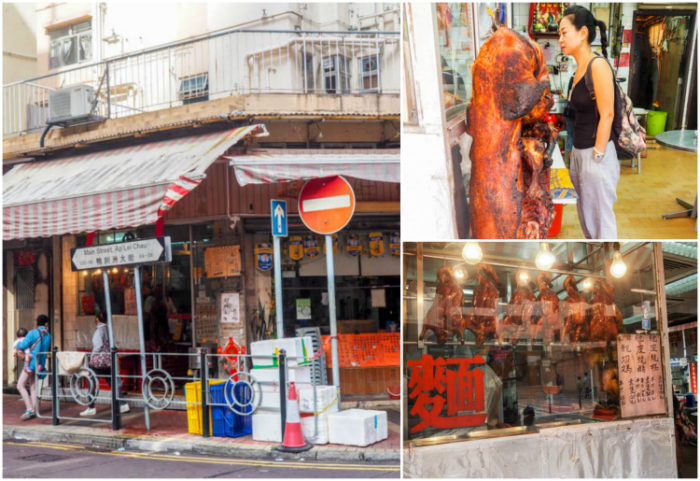 After over two and a half years of being away, it felt good to get back to traveling in Asia, starting with a six day stay in Hong Kong. Naturally the first thing we did after getting off a 15 hour direct flight from Boston was join Edith for her Local Cooking Experience cooking class.

Jet lag was not going to hold me back from my first foodie experience in Hong Kong. We met Edith at the Lei Tung MTR station and we were joined by two others, Virginia, who had moved back to Hong Kong from Canada and was running her own set of Hong Kong tours (including a free city tour) and Violeta, an Italian woman who had been living in Hong Kong with her family for 2 years and was putting together a Hong Kong independent guide book. I was very excited to be among a group of such travel centric ladies.

We learned Edith’s history as we got started. Edith grew up in Canada and came back to Hong Kong and has been living in Hong Kong since the 90s. She is a private English language instructor as well as a cooking instructor. While she has no formal culinary training she has been cooking since childhood and is the ultimate foodie.

Our first stop was a local pork shop that has been here for 30-40 years and makes a classic barbecued pork. We got to try a taste. It was tender, succulent and juicy. Nothing short of delicious and my perfect first taste of Hong Kong. 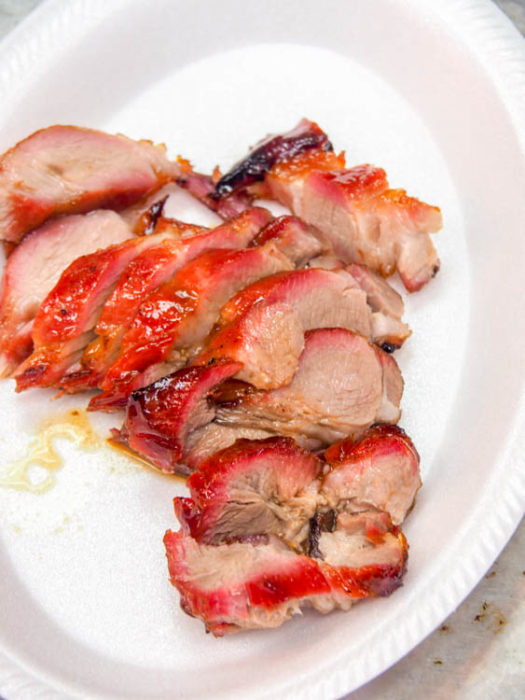 From there we made our way towards the wet market, passing by numerous shops which were still closed for the Lunar New Year celebration. 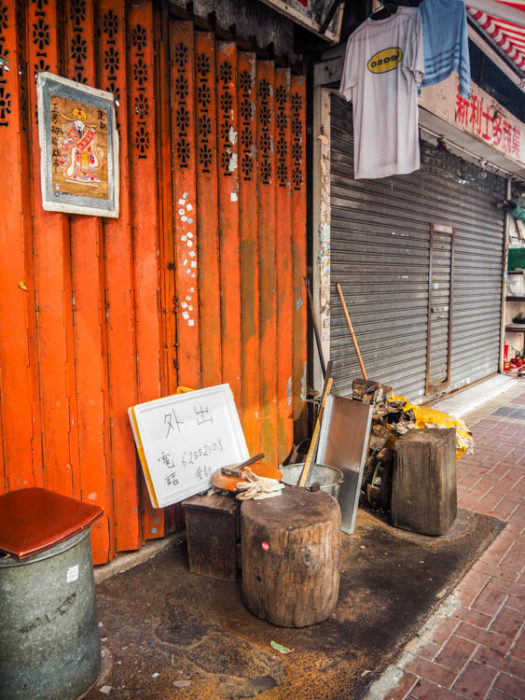 Edith quickly explained to us why the market was referred to as a wet market. Because of all the meat and seafood that is being processed there, the workers are constantly washing down the floors, making them wet all the time, hence the name the wet market. It turns out the meat of choice in Hong Kong is pork. You can see all different parts of the pig sold in the market. 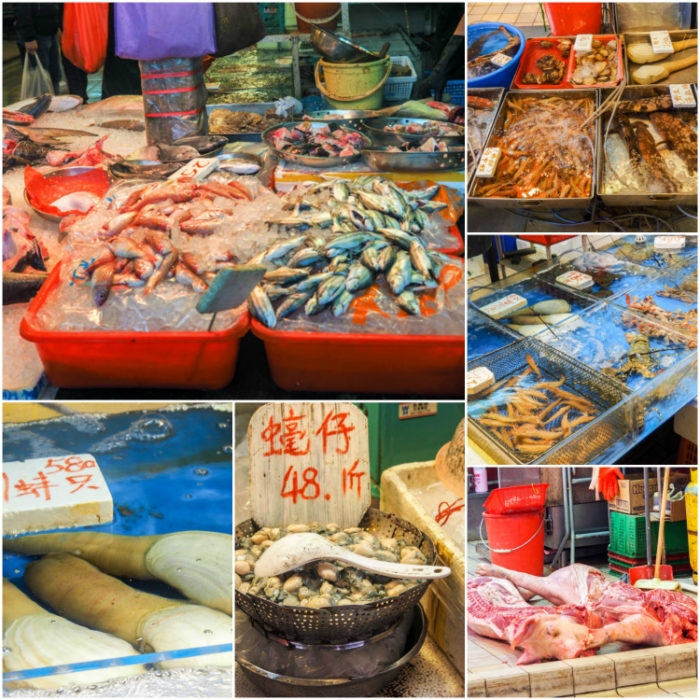 And then there’s seafood galore. Things I had never tried or heard of. We learned all about the geoduck – a highly valued and expensive seafood (pictured above, on the bottom left) that is thinly sliced and served as sashimi. At $75-$100 USD for one geoduck, this is a serious luxury, if you ask me.

Edith explained to us that in Hong Kong purchasing seafood is a very personal affair. Even those people who have domestic helpers (like a live in maid) who do all of their shopping, will still personally go down to the market to pick out the fish and seafood. 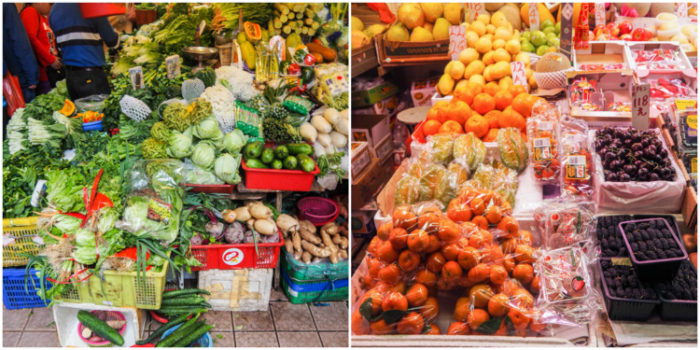 Then it was on to the vegetable market, where Edith pointed out various fruits and veggies that were foreign to us. It never ceases to amaze me the vast variety and selection of vegetables in Asia. So many that I would not know what to do with and yet every single one has a specific purpose. Edith would point out which ones would be used for flavoring soups versus eating, etc.

From there we were going to take a short ferry ride over the water to Aberdeen, but before that we spotted a local fishing boat selling their daily catch. 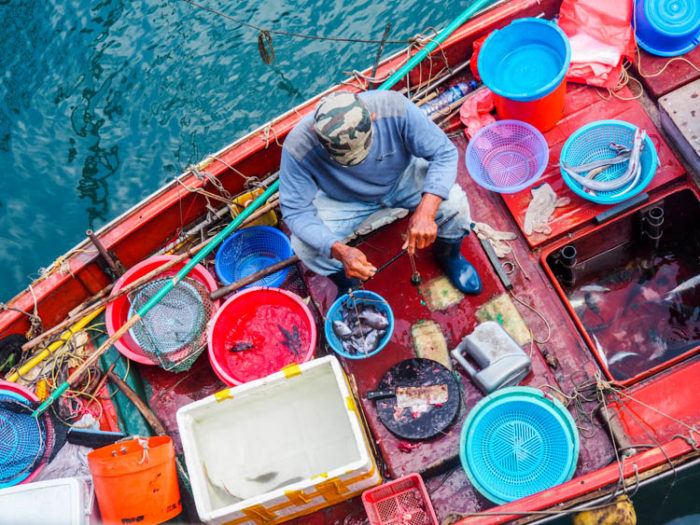 This was fascinating to watch and Edith gave us a full run down on what was happening. These small fishing boats bring back their daily catch and anchor by the ferry dock, cleaning the fish, waiting for people from up above to place their orders. 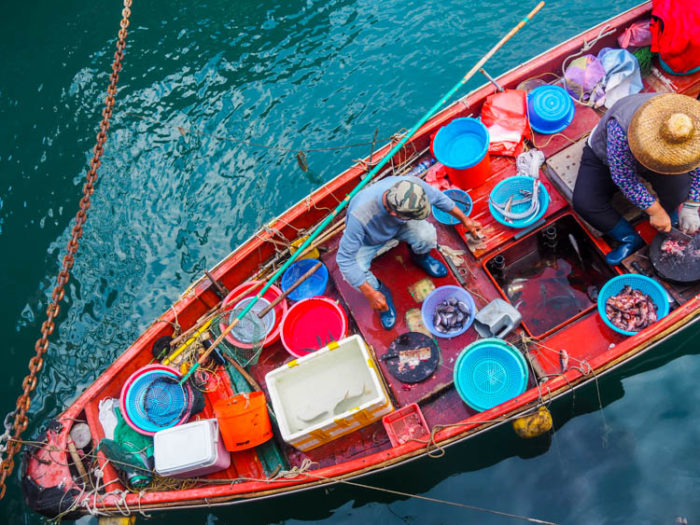 Once the orders are placed the fish goes into a bag to be passed up to the customer, who in exchange puts their money into the basket. We fully enjoyed standing by and watching this whole process unfold. 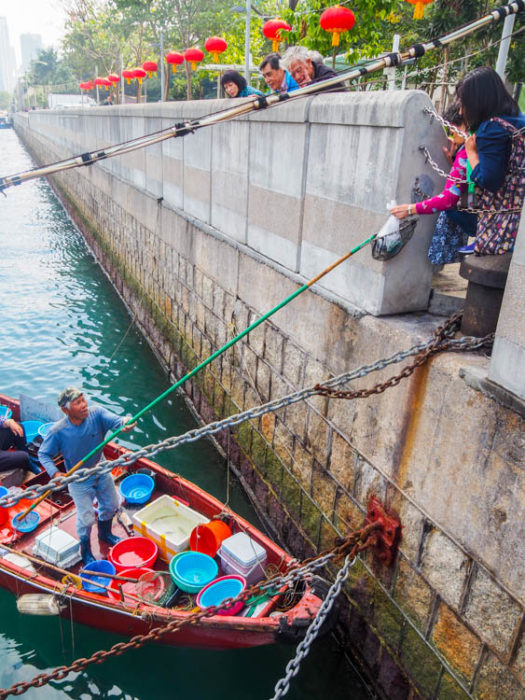 I could have watched them all day but we had a ferry to hop on. 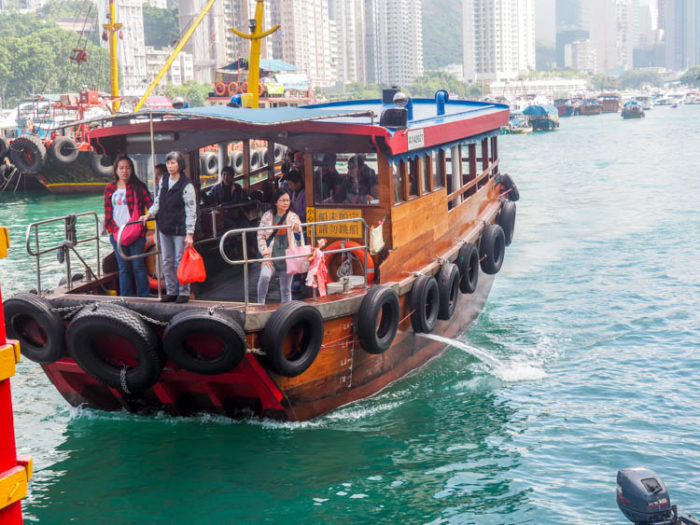 Hong Kong is a truly impressive city and there is no shortage of high rise buildings every where you look. 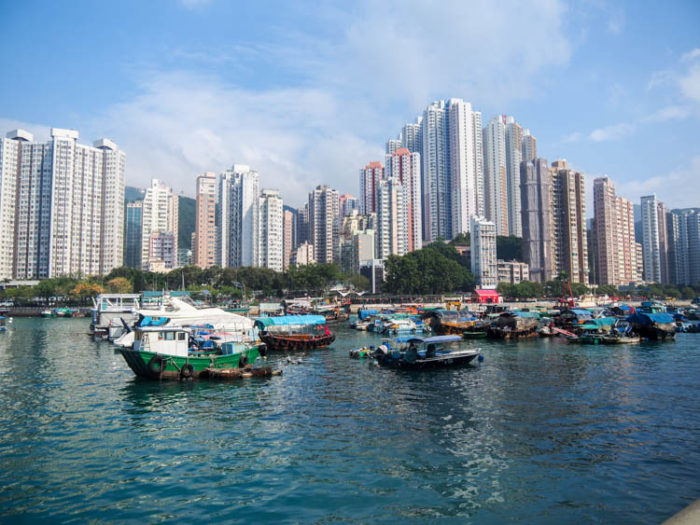 After the short ferry ride we passed by the promenade before making our way to Edith’s apartment. 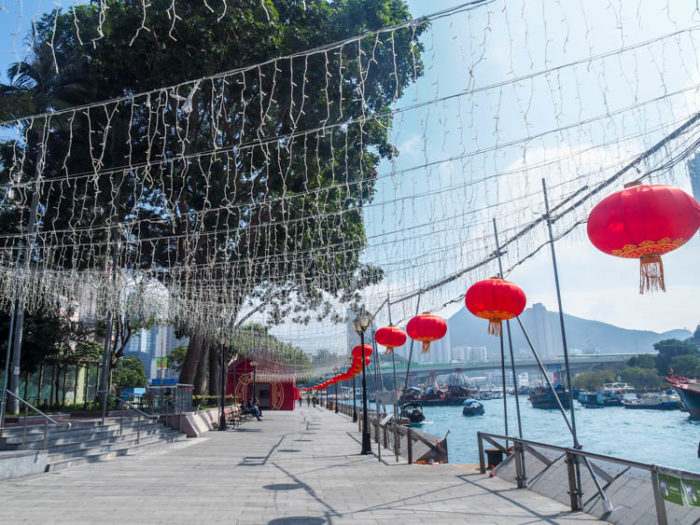 We had to stop by and see the smallest temple in Hong Kong first though. Edith explained to us that the people were trying to tear this down but a nearby restaurant caught on fire around the same time so the local people asked the gods and the gods told them not to touch the temple, and so it has stayed. The residents of Aberdeen worship all the gods as Edith explained, just to play it safe (being a fishing village, their family members would be out at sea, so they wanted to ensure safe voyages home). 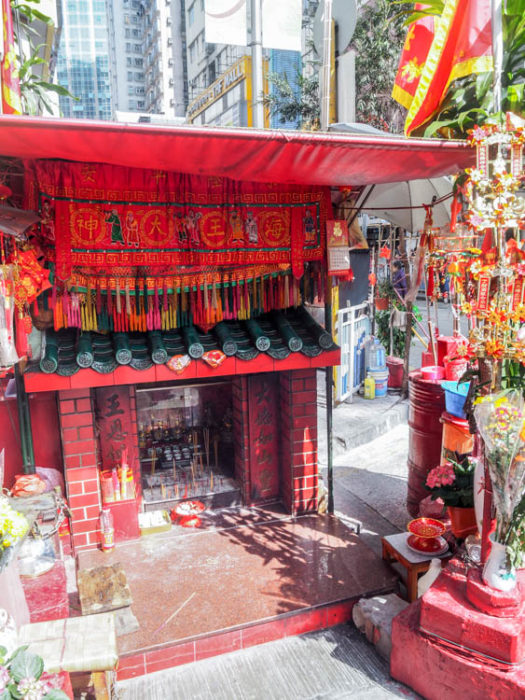 We came to find out from Edith that Hong Kong has an incredibly high ratio of domestic helpers to households. These domestic helpers are mostly from the Philippines, Indonesia and Thailand and make around 4200 HKD including room and board per month ($525USD). Even people who only earn 15,000HKD a month ($1875), can afford to hire a domestic helper who will cook, clean, grocery shop, care for children, etc.

Hong Kong also happens to be packed full of restaurants with 1 restaurant for every 300 people. Edith is just brimming with tons of interesting facts and observations and I just could not get enough of them.

When we got to her cozy apartment we were ready to start cooking! Our menu for the day was pork and vegetable dumplings, scallop topped tofu with black bean sauce, and soy sauce stir fried eggplant and mushrooms. 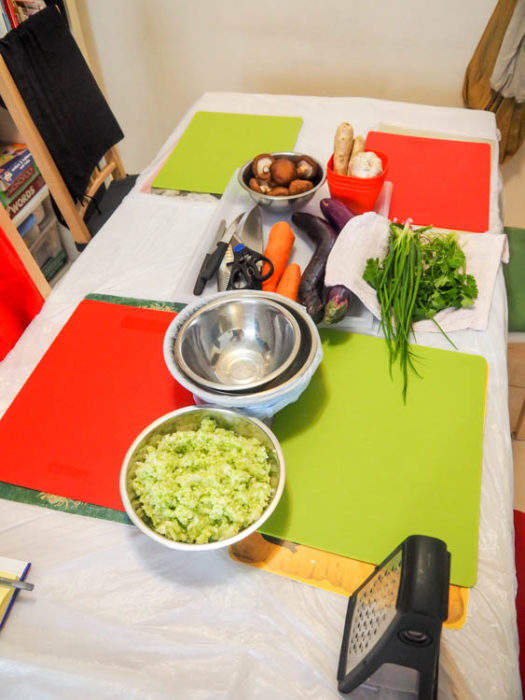 The way the cooking class is set up is that everyone joins in together and takes on one part of the recipe. This is not a cooking class where each person has their own individual station and they take part in each step of the cooking process. Here we are cooking together in Edith’s own home, and with Hong Kong size kitchens being what they are, it is just not possible for each person to have their own work station. 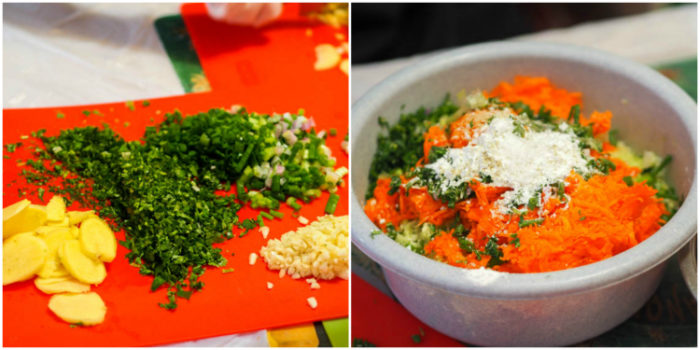 For me this style of cooking class works. This allows the group to create a recipe together while also being able to chit chat, and learn more about the cooking style and techniques from Edith. As we were making the dumpling filling Edith took the time to reiterate that the cabbage and carrots need to be squeezed dry so as not to add too much liquid to the filling. The dumplings were made with a filling of pork and veggies. 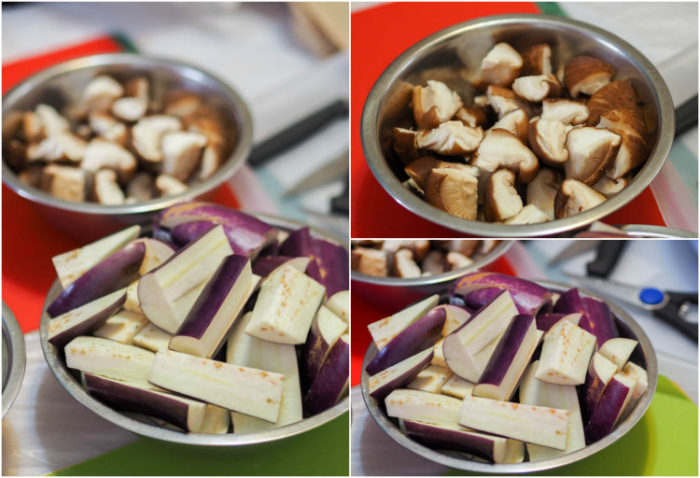 One thing it seems the Chinese love to do – is use scissors in the kitchen. Edith swiftly grabbed the scissors to start cutting up the mushrooms into quarters, something that makes perfect sense, yet you never see in the American kitchen.

Then we got the introduction to classic seasonings and sauces that you can find in a Hong Kong kitchen. These include black vinegar, white pepper, soy sauce, black bean sauce, sesame oil, and kecap manis (a sweet thick soy sauce). Edith tries to keep her recipes simple, so that they can easily be recreated at home so she likes to stick to one specific sauce for each recipe. 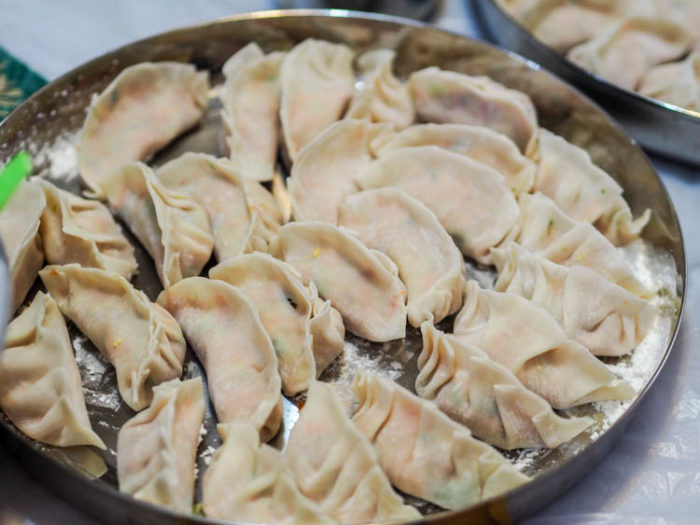 Once we had hand sealed all the dumplings these were ready to be cooked. The way the dumplings are cooked is that they are first fried in oil. 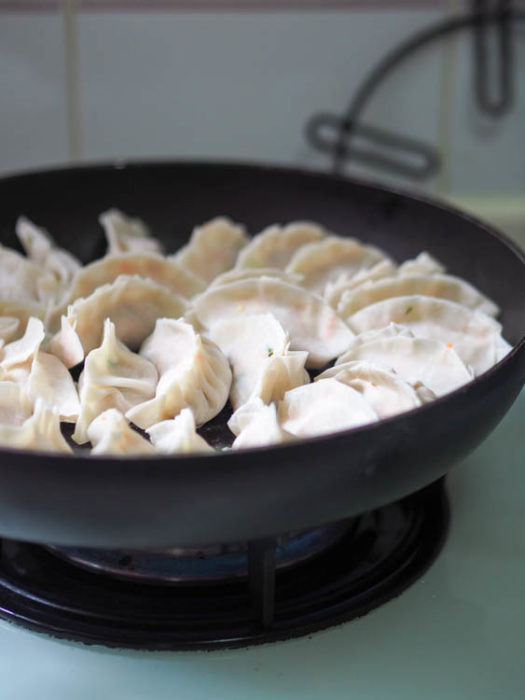 Then a cup of water is added, and the pan is covered. Once the water has evaporated the dumplings should be ready and as you can see lightly crispy on the bottom. We dipped the dumplings into a sauce made up of black vinegar, chili bean sauce, sesame oil and soy sauce. The dumplings were just perfect, super soft on the outside with a flavorful rich filling and nicely crisped up on the bottom. Definitely superior to just boiled dumplings! 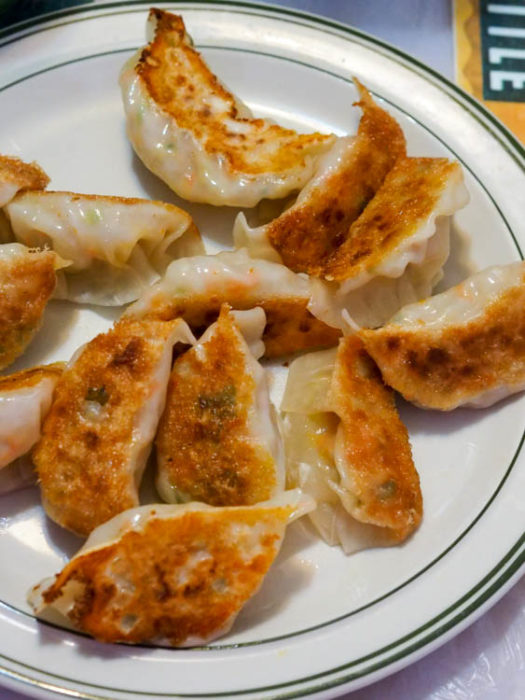 Our next course was tofu stuffed with scallops with just the slightest hint of a black bean sauce on top. These large scallops are steamed on a plate right with the tofu for just a few minutes until they are cooked through. 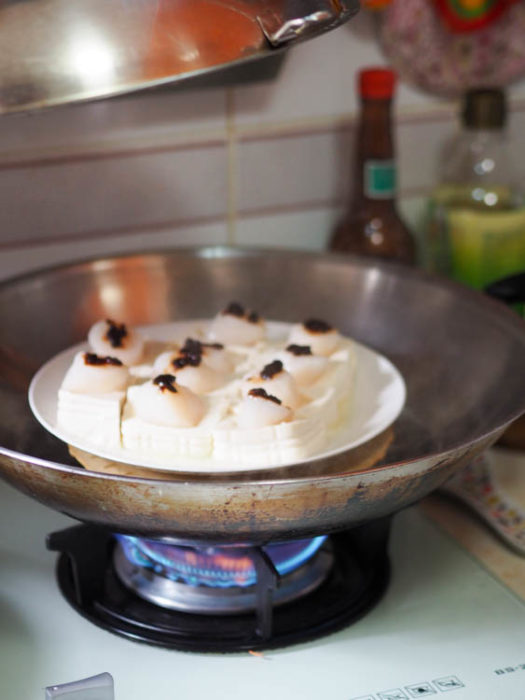 For the veggie stir fry we cooked garlic and ginger in hot oil before adding the eggplant and mushrooms. For flavoring a bit of water and the sweet soy sauce was added. 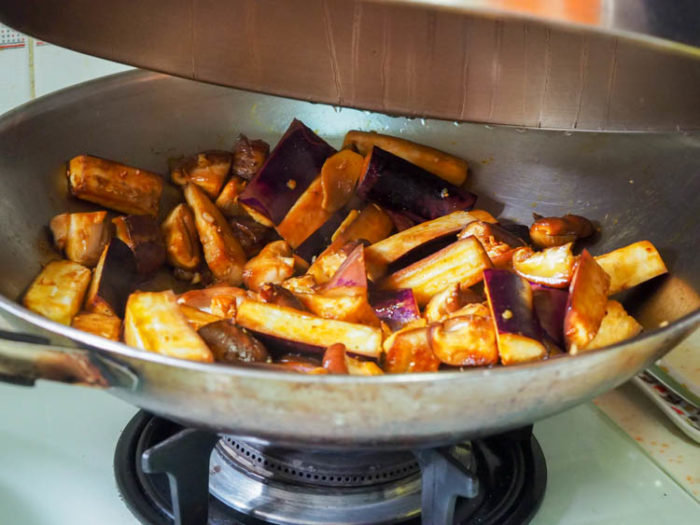 I loved observing Edith move around swiftly in her small compact kitchen. Americans are pretty used to having a ton of kitchen space, so I have the utmost respect for anyone who can manage to make a three course meal in such a small space.

Then it was time to eat!

I very much enjoyed the black bean sauce on top of the scallops. You only need a little bit, but it goes a long way as it has a strong distinctive taste. 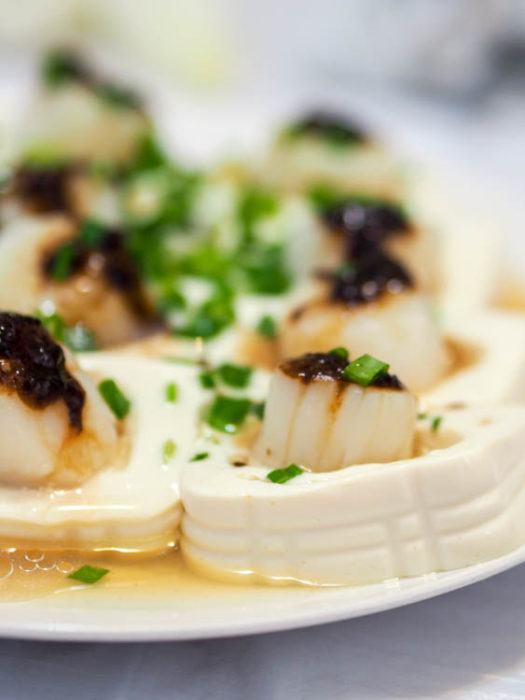 I also fully enjoyed the veggie stir fry – I love both eggplant and mushrooms and anything with veggies so this was the perfect dish for me too. 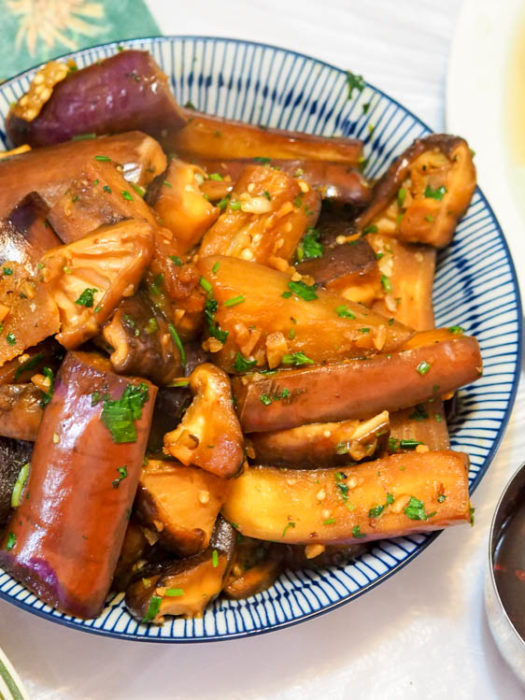 And then for dessert Edith surprised us with a century egg – which Dave and I both were curious enough to try. As you can see the egg white is almost black and the yolk gets significantly darker in color as well. Definitely a bit of an acquired taste, but I fully enjoyed the chance to try this. 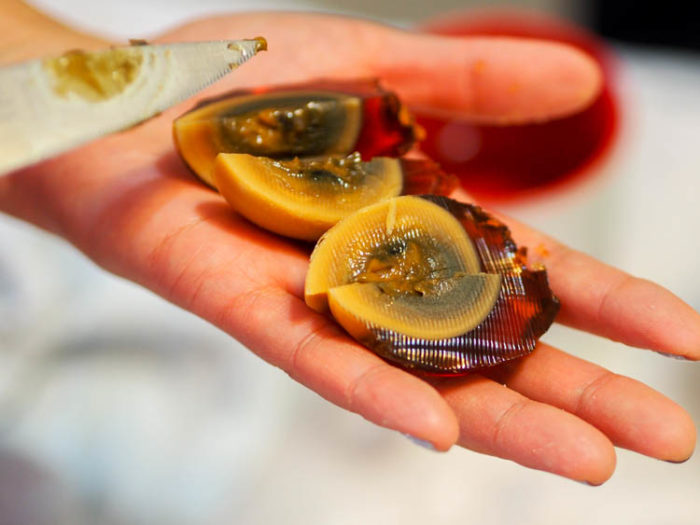 Overall we both fully enjoyed our time cooking with Edith and learning a bit more about the history, culture and food scene in Hong Kong. It was amazing to see a different part of Hong Kong that we might not have stumbled across in our six days in the city.

It was particularly interesting to be in the apartment of a local and see how the people in Hong Kong really live, and see a proper Hong Kong kitchen. This felt like a very personal experience and Edith was very happy to be super open to any and all of our questions!

You can book the cooking classes through the website here: https://www.localcookingexperiencehk.com/

The classes include a market tour, and three course hands on cooking demonstration and meal. The price per class depends on the number of participants, for 1 person the class is 1500 HKD, but in a group of 4, the price per person drops to 600 HKD. 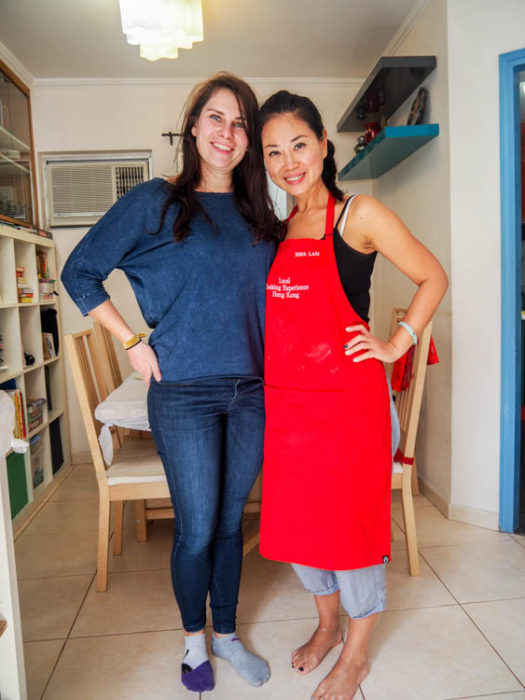 Thank you to Edith for hosting us in your cooking class. As always all opinions expressed here are my own.