With our 5:30am wake up call we were ready in minutes and out the door with our backpacks (we had left our suitcases as Sasha’s grandmother’s in Jerusalem). Next stop Wadi Rum – the red sand desert. We had heard there was a 6:30am bus that goes from Petra to the Wadi Rum so we made our way through the isolated streets to the bus stop. If in ancient Petra we fit in with the other tourists, dressed in active wear, sneakers and sporting backpacks – here we really stuck out. Needless to say we got quite a few looks at the bus stop. 5, 10, 15 minutes passed.  We started to get anxious – had the bus already come and gone? Would it come at all? We knew these were all possibilities. We tried to communicate to some of the locals that we were headed to the Wadi Rum and inquiring about the bus – the locals found an English speaking man who borrowed another man’s cell phone and called the bus driver directly and told us that he would be there within 15 minutes. Now that’s really going out of your way to help somebody out. Can’t say I’ve ever seen anything like that in the US. It honestly is just refreshing to see people take an active part in helping others (especially when it’s you) instead of just shrugging and looking the other way.

The bus arrived as promised. More of a dilapidated mini-van than a bus though. A couple locals got in with us and then we drove around to other hotels picking up Wadi Rum bound tourists (oops should have looked into that). It was early, and Sasha and I drifted in and out of sleep as the bus rattled on. All of a sudden the bus came to a screeching halt in the middle of the highway. Now wide awake we frantically tried to wrap our minds around what was going on, which proved to be even more difficult when all you see is foreign men huddling around rattling on in their own language. Finally it became clear. There had been a terrible accident on the road – a car had hit a taxi with such force that the taxi’s passenger door was welded shut.  A man was trapped inside. It was an awful scene. Two small children crying hysterically with blood on their faces and hands, their mother on the verge of a breakdown and the husband trapped in the car, unable to move, with his body jammed between the seat and the door.

But why had our bus stopped? From what I could tell every single car that passed the accident pulled over with the men rushing to help pry the metal door loose. Not a car drove by without stopping. All the strangers acted together, trying to help save the man’s life. Every single car waited until the ambulance arrived before heading on its way. I was bewildered by this genuine act of compassion. I don’t know if this kind of behavior is the norm in Jordanian society but it really moved me.

And just as quickly as we had stopped, we were back on our way. We were dropped off in a little Beduin village outside the Wadi Rum and were left to our own devices. All the other passengers opted for a Jeep tour and began to negotiate prices. Not us though. Sasha had already picked out an on foot hike and assured me that with his trusty compass there was no way we’d be in any trouble. Followed by another ‘trust me’ we started our dessert trek. 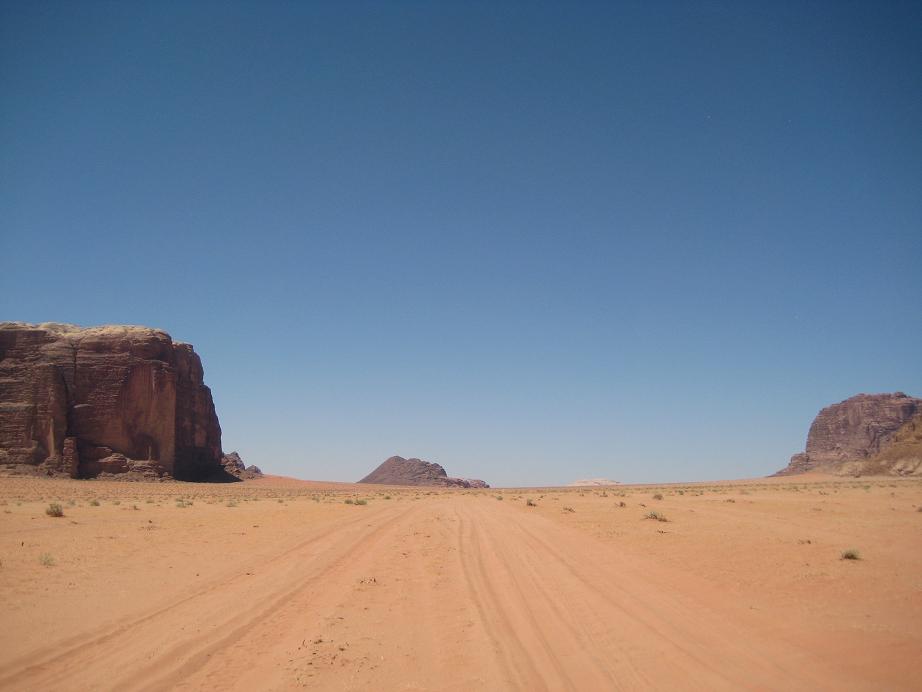 As if hiking through the desert wouldn’t have been enough of a challenge we decided to make it even more difficult by carrying our 15 pound backpacks and 8 liters of water with us. To lighten the load on our backs we wrapped t-shirts around our heads and started the march. I specifically remember saying out loud that once we got to the big rock ahead of us I would take off my t-shirt to just walk around in my tank top. My assumption was the rock was 10 minutes away, Sasha’s that it was at least 20. An hour and a half later we finally got there and saw our first glimpse of shade. 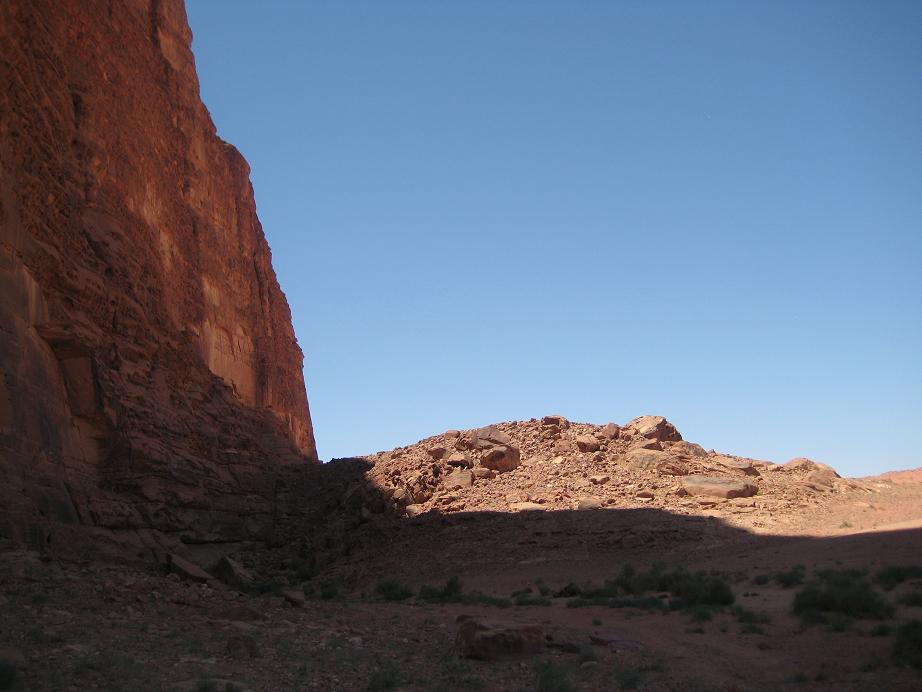 The desert is truly fascinating in that without having anything  familiar to compare in size, distances are completely distorted. What seems relatively close could actually be miles away. Sasha mistook a Jeep in the distance for a moving bug. Objects may seem relatively close at first but they take forever to get to. An absolutely unique (and somewhat painful) experience. Just the feeling of your feet lightly sinking into the dry red sand with every step is unlike any walking experience I’ve ever had. We were also completely alone (regular tourists go for the 4×4 tour). Not another person for miles. Utter solitude can be slightly alarming – especially when you are completely disconnected from the outside world, no cellphones, laptops, no way to get help. But it’s also refreshing at the same time, being able to look in any direction knowing there are no people in sight, and that if anything were to happen you will be the only resource to get yourself to safety.

Sasha’s plan was to circle around a few large rock formations, cut across through a specific one and then circle back to the Beduin camp. Somehow we got lost though. The compass was pointing us in the wrong direction and we couldn’t match ourselves us with the map. My paranoia started to set in – we’d run out of water, become delusional and just go stark raving mad without anybody even knowing where we were. Naturally fearless Sasha thought we should just venture on and we’d be able to find our way back. I talked him out of it though, reasoning that we had already been out there for 4 hours, our water was running low and if we took longer than expected it would start to get dark and then we’d really be in for an adventure. Thus, as boring as it is to go back the way you came, that’s what we did. A good decision it was. It took us another 3 hours just to get back the same way. And we were completely drained of all energy by the time the little Beduin village was in sight. 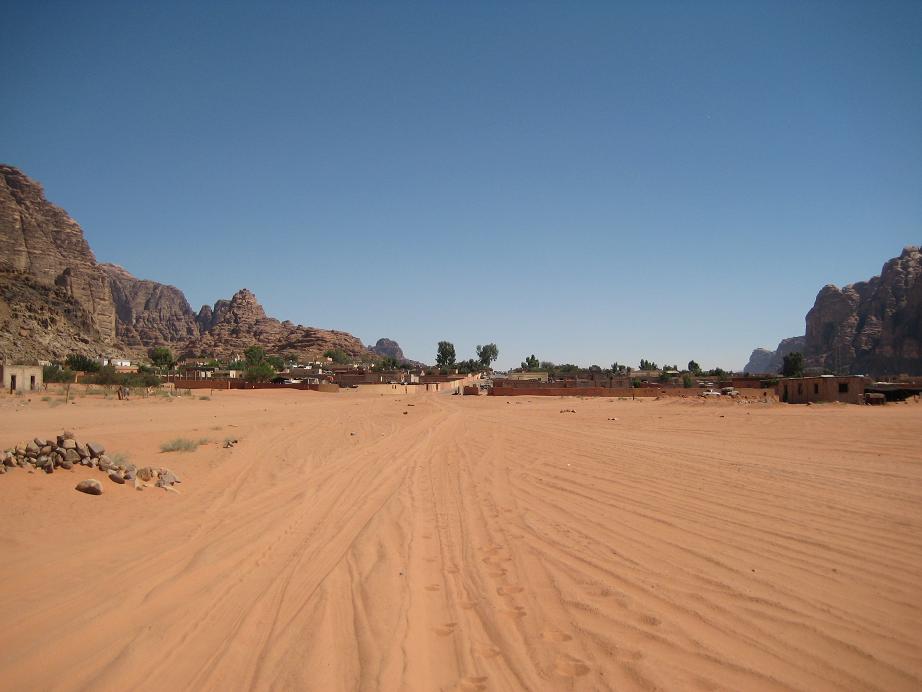 As must as we would have liked to collapse at the foot of a luxury hotel at that point, we still had the journey back to Israel in store for us. Sasha asked a local to call us a taxi and after finding out it would be a while the man invited us into his home. Granted it probably was not the wisest decision to go into a stranger’s home in the dessert in Jordan, we were just too tired to resist. First we just sat outside with a whole group of little kids, all eager to high five us and giggle while practicing their English ‘hellos.’ When the lady of the house saw the children starting to overwhelm us she quickly made them scatter and invited us into the house. A very simple stone house. We sat in the main room, on mats, no chairs or couches in sight. Across from us was the man of the house and his nephew (the one who called the taxi). They both spoke decent English and started to ask us various questions about our lives, families, etc, also serving us hot sweet tea and Jordanian sweets. What really stood out in my mind was the discussion of politics. Here in the dessert in the middle of nowhere the Jordanian man with multiple wives and dozens of children was telling me that he’s met a lot of Americans and has no problem with them  and that he understands that the actions of the government in no way reflect the opinions and feelings of the people themselves. Sure, he said  Jordanians do not approve of what America has been doing to their ‘brother’ Iraq but there is a line separating the people from it’s government and this man acknowledged his understanding of this and how open and accepting he was of all cultures – even Americans.

As our taxi drove us back to the border I thought about what it means to visit a country and how much time you really need. Is it running around the country with a checklist and hurrying to see all the sights? Is it sitting around eating and talking with the locals? I couldn’t have been more grateful that, in the little time we had, we really got to do both. It really is refreshing to have a genuine conversation with a complete stranger, one that offers a little window into their lives.

With the interactions we had with the local people in those meager 36 hours, I left Jordan with a much greater respect and appreciation for the culture, the people and the country than I ever could have imagined. I know I still have a lot to see and learn about Jordan and the country deserves a longer visit, so I hope it’s not long before I go back. 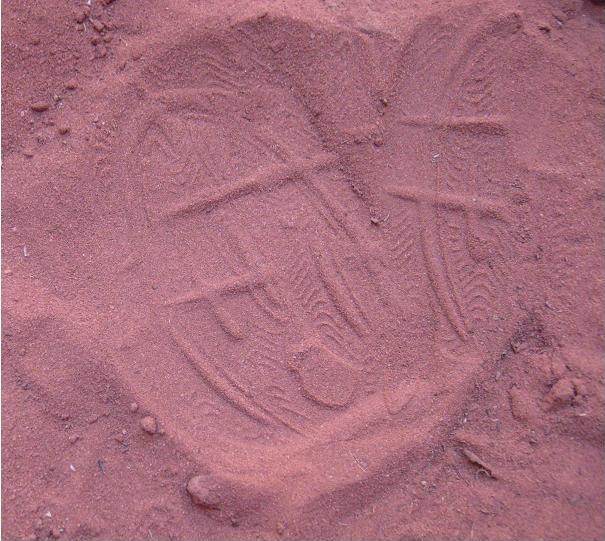 From Wadi Musa (Petra) there is a daily bus that leaves at 6:30am and costs 5JD ($7USD) (can arrange bus pick up at your hotel or walk to the central town bus stop)

Want to read more about Vicky’s trip to Jordan?