Jordan – The Ancient City of Petra 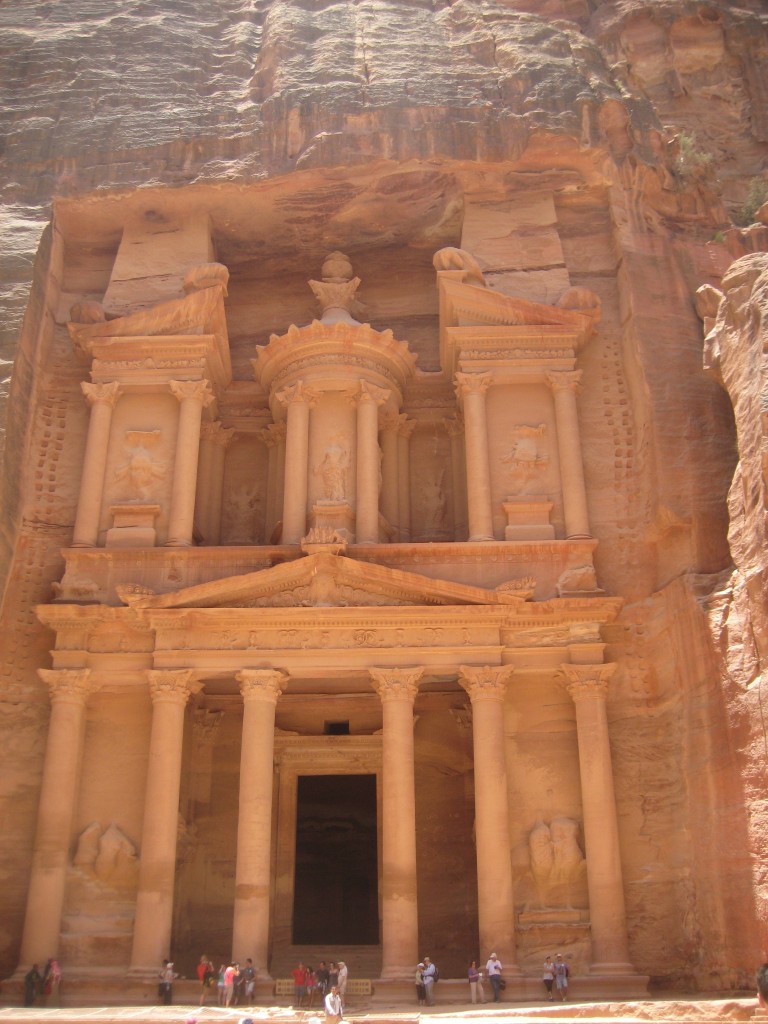 Truth be told it’s been a while since my trip to Jordan. One and a half years to be exact. But the memories are still so fresh in my mind that it’s not too late to share them now.

Although I haven’t been everywhere I have done my fair share of traveling and usually I have a decent idea of what to expect in each destination. But Jordan really blew me away. The sights, the landscape, and most importantly the compassion and hospitality of the people really made for an unforgettable experience.

It was my cousin Sasha’s idea to go to Jordan. Dave Sasha and I had all been accepted to the same Birth Right trip  and Sasha had this die hard desire to cross over into Jordon after Birth Right was over (Dave did not accompany us). Our parents were horrified and filled our minds with news type stories of how dangerous the country was. Honestly I did start to feel hesitant – not Sasha though – there’s no stopping his drive for risk and adrenaline.

So off we went. We took a cab from Eilat, Israel to the border crossing – and walked across the border (after paying the exit tax of course). So simple – a short walk and we were in another country — I must admit that was my first ‘on foot’ border crossing. What next? Our first destination – Wadi Musa (Petra) – about 2.5 hours away. Sasha insisted that we could take a bus from Aqaba (the neighboring town) and stood his ground while the taxi drivers awaiting us clueless foreigners started to attack us with prices. It didn’t help that we really had no idea what time the bus was coming, so when the taxi drivers told us the bus left hours ago and the next one wouldn’t be coming until the next day I believed them.  Sasha on the other hand insisted they were just trying to trick us to rip us off. So went back and forth with them for close to an hour, mainly because Sasha kept trying to bargain down the price. We finally settled on $60 which probably was a taxi mafia rip off anyway but we only had one day to get to and explore Petra so we couldn’t waste all day. The ride was relatively smooth – except for the part where the driver said he was going to make a stop and another driver was going to take over – and I started to visualize us being sold into slavery. Alas the new driver got behind the wheel, introduced himself and we even had a nice little chat in Russian — apparently he went to Kyrgyzstan (a former Soviet republic) to get his degree.

And finally we got to Wadi Musa (Petra) – checked in at the Petra Inn (mainly chosen for it’s proximity to ancient Petra) and went out to refuel. A delicious feast of falafel (for me – as I figured that would be the safest choice anywhere) and shawarma. Next stop – ancient Petra. After purchasing the surpsingly expensive tickets we were in – and as promised on the tickets, waiting to mount our horses for the ride to the entrance. 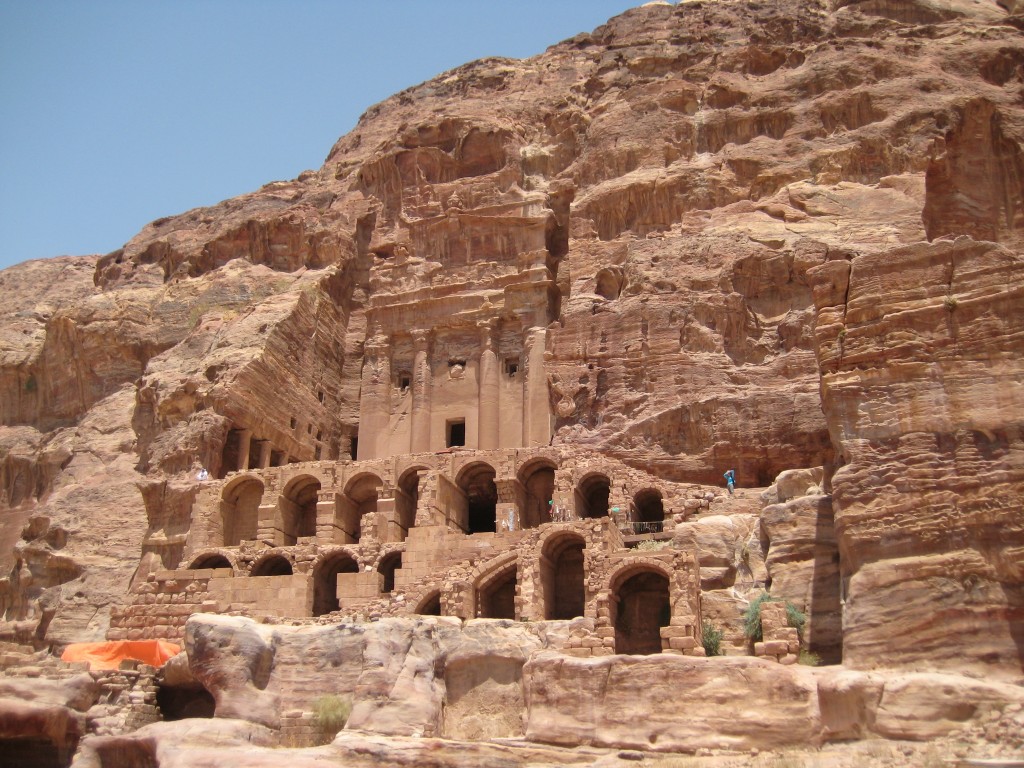 Petra is an ancient Nabataean city dating back to the 6th century BC. Until the earthquake around AD 633 Petra was a crucial center for trade and commerce.  It wasn’t until the 1800s that Petra was discovered by the western world – Burckhardt explored the grounds in 1812 and later more explorers followed. It was included in UNESCO’s World Heritage Sites in 1985.

There are no words to describe the site itself – there’s just nothing else like it. I didn’t know much (if anything) about Petra before we got there so I really didn’t know what to expect. It truly is breathtaking. It could take days to explore all the grounds. We only had one so we went at a quick pace, without taking many breaks — which was particularly exhausting because of the desert heat and the blistering sun. The carvings in the red stone tower over you and force you to wander around in sheer awe and try to imagine what life must have been like here at the peak of it’s existence. And when the sun hits it just right the carvings seem to change color, becoming more vibrant and alive. 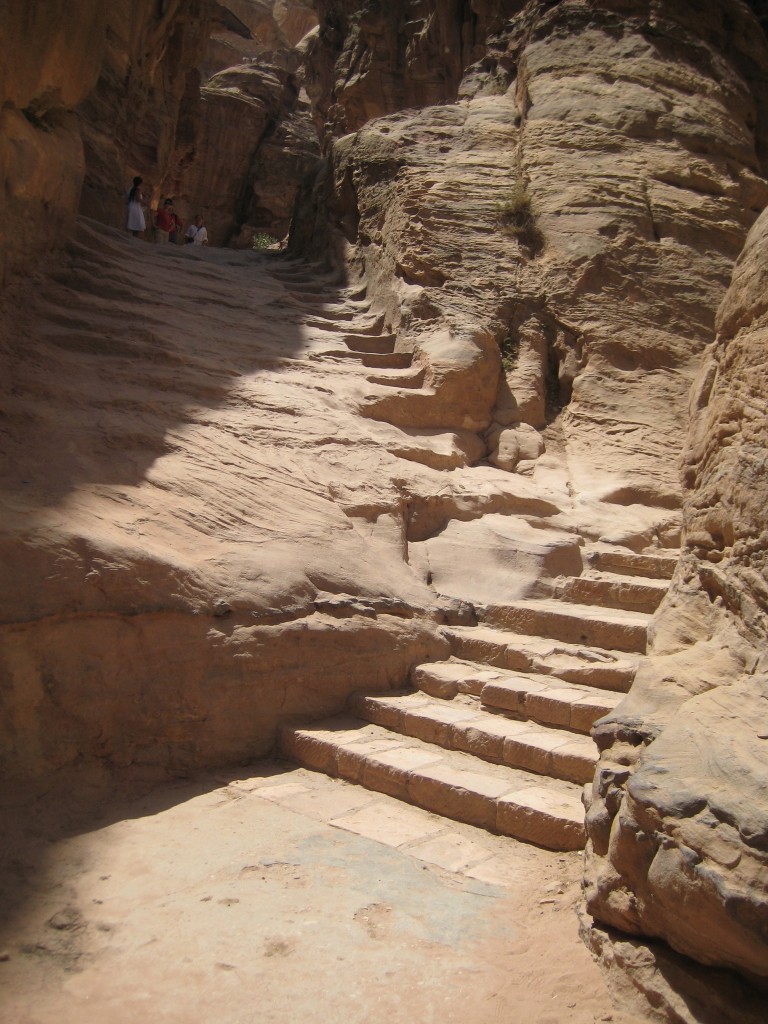 We had walked down the main alley, past the Treasury, into the heart of ancient Petra and climbed the 800 steps to the Monastery (Indiana Jones anyone?). The alternative is to hire a donkey and ride up the steps – but if you saw the sad look on these helpless animals faces you wouldn’t dare. 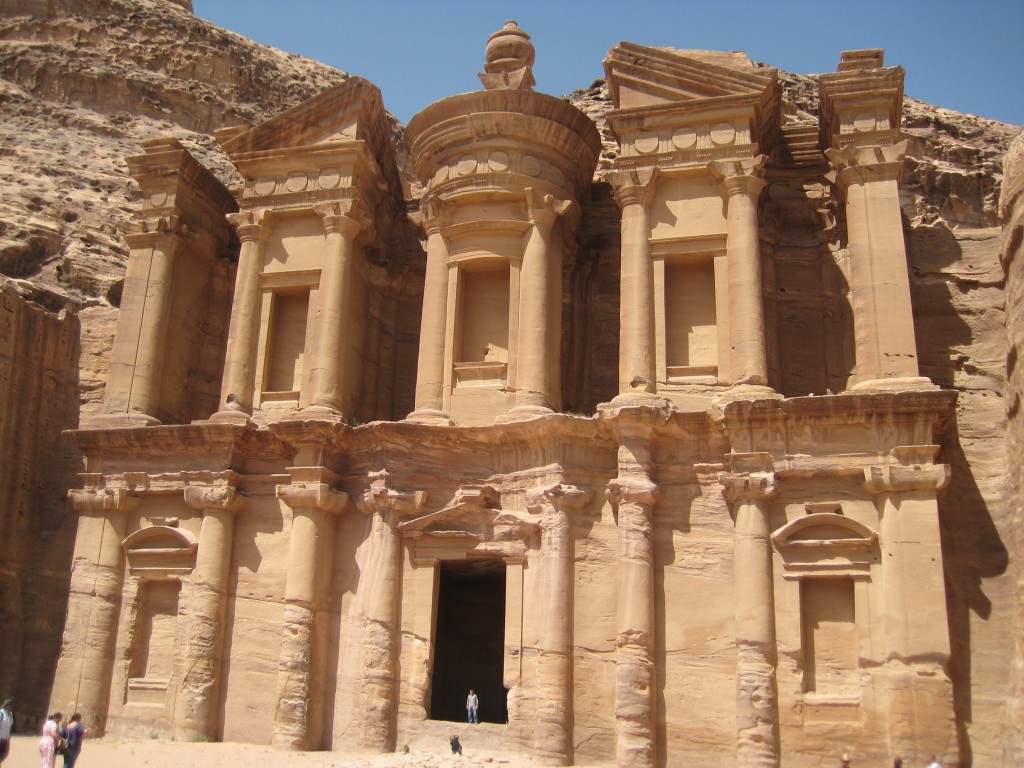 While the you cannot climb in to the Treasury you can climb into the Monastery. And so we did – only to be followed by a local girl selling bracelets. This is the sad part about Petra – all the vendors scattered around, especially the young children walking around in the blistering heat for hours desperately trying to sell bracelets and various trinkets. What do you do? Do you buy something hoping that the child sees even a glimpse of that money? Or do you refrain, hoping to discourage the use of child labor? We chose to refrain but we did sit in the cool chamber and talk with the girl for a little while.

Up until this point we had really just been following along with all the other tourists – Sasha had had enough – he needed more adventure. Looking through his guide book he found a “do it yourself” hike that he insisted we could maneuver before dusk. “Trust me” he said, and I knew I was in for an adventure.  So off we went, climbing up through hidden staircases and circling around cliff faces to the top. Thankfully we were being followed by 3 English speaking girls who had hired a guide with donkeys to take them up the same route. So every now and then we would look back to make sure we were being followed.  Success. 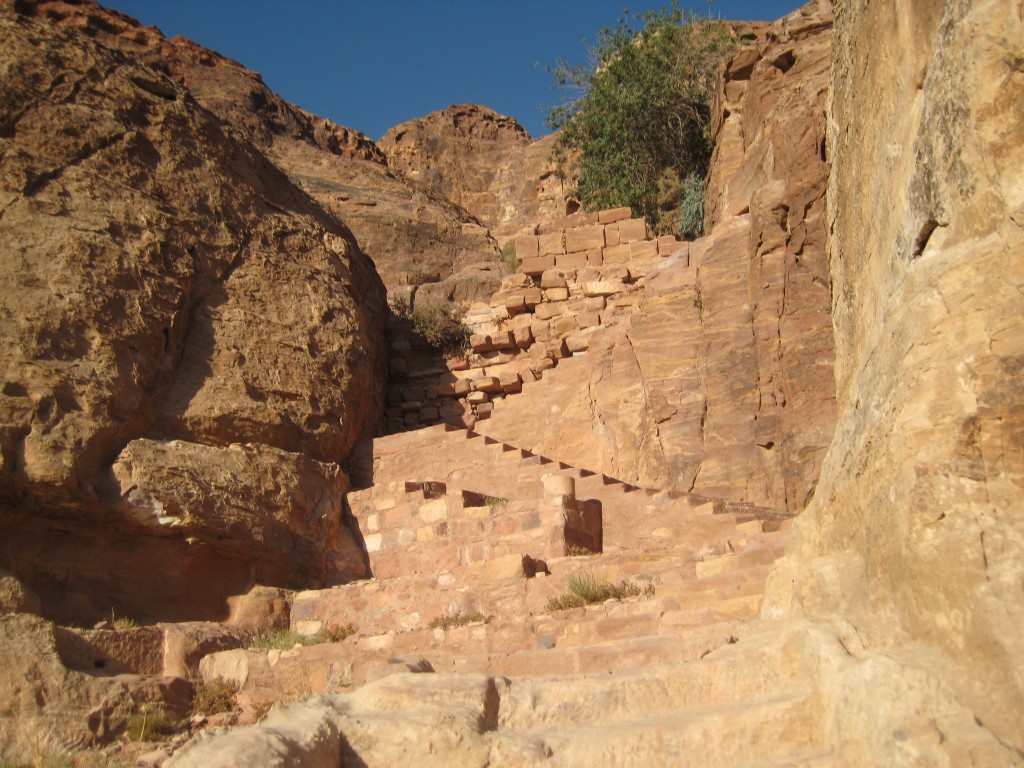 When we reached the top (the High Place of Sacrifice) we had a few moments of solitude. We were the only ones out there and all of Petra opened up beneath us. 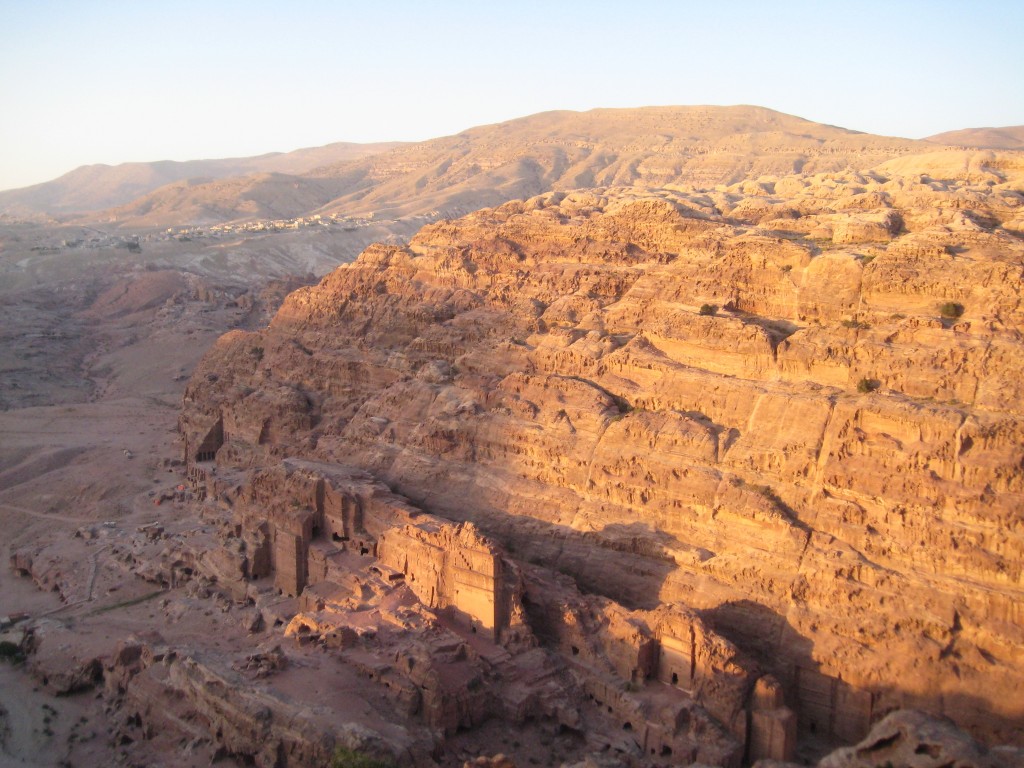 View from top of Petra – Jordan

Shortly afterward, the guide with the girls followed. A local beduin who had a little tent at the top came out to serve them hot sweet tea – said to help cool you down. We figured it was part of the luxury of paying to take a tour and therefore expected to be dehydrated until we found a water vendor. To our surprise the man came over and shared the tea with us and offered that we join them in conversation. Such a hospitable gesture. We sat around for a little while talking about Petra and the life stories of the two men. It was starting to get dark so we made our way down — with the guide explaining to us how to go and where to turn. As we exited Petra it is was almost dark and along the path on both sides lit candles had been placed in paper bags and were lighting the way. It was phenomenal – a perfect way to end our visit.

We had an amazing day – full of activities, impressions, adventures, reflections. On top of all that the heat and blasting sun had really exhausted us. After a celebratory dinner feast at a local Wadi Musa restaurant we crawled back to the hotel, barely justifying the need to shower – which proved to be beyond refreshing due to the lack of hot and even lukewarm water.  That was the only downside to the hotel. We had an early start ahead of us so we both collapsed and were asleep within minutes.

From border crossing to Petra, taxi can be incredibly overpriced (50-100JD based on bargaining skills), might want to consider taking a taxi to neighboring city Aqaba and then a separate taxi from there to Petra 30 JD ($42 USD)

Mini bus available from Aqaba to Ma’an (1.5 JD) and from Ma’an to Wadi Musa (0.55 JD) but could be inconsistent and running times unknown

TIP: Make sure to bring plenty of water with you to Petra and wear a hat or a head covering

Want to read more about Vicky’s trip to Jordan?

2 Responses to Jordan – The Ancient City of Petra