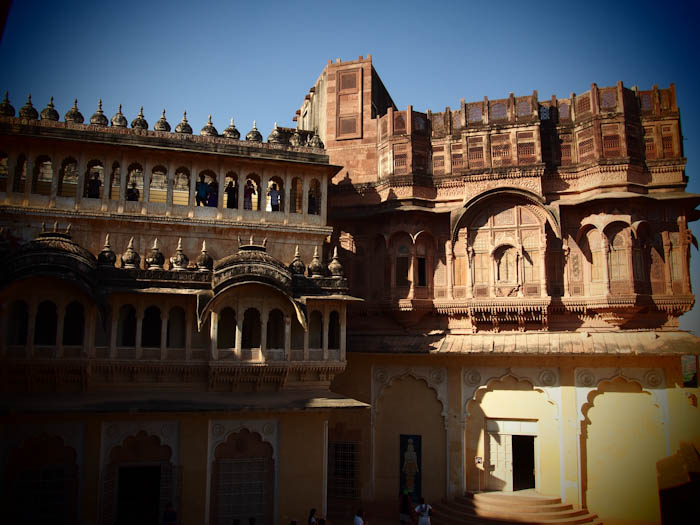 Jodhpur is well known for it’s Mehrangarh Fort, the largest fort in Rajastan and for being the blue city, as most houses in the old city are a shade of blue.

While we spent a good aftern exploring and admiring both the blue walls and the Fort, the highlight of our stay in Jodhpur was the food we found there. 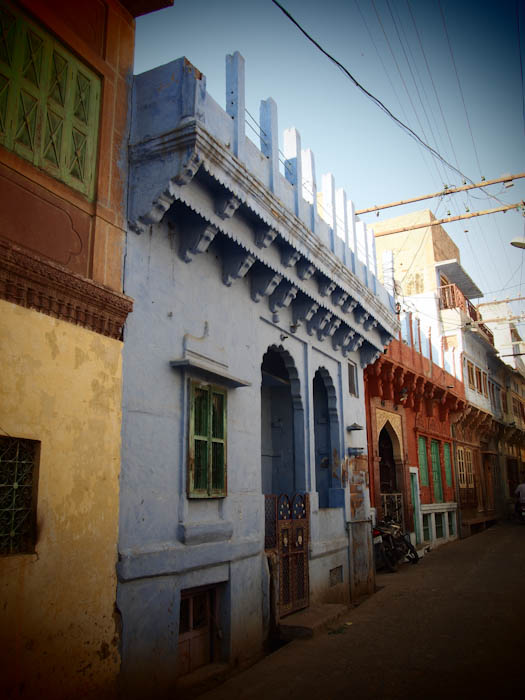 We headed to the clock tower for lunch in search of lassis and samosas and the places to find them, which we had read about on Wikivoyage. 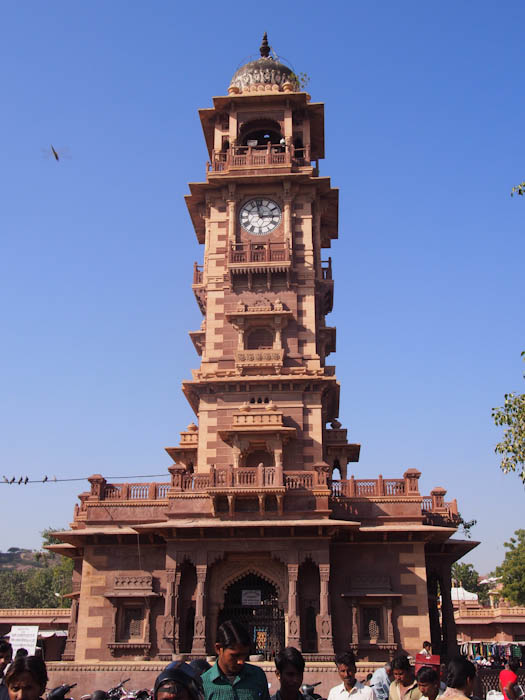 First stop was the lassis. We were in search of Mishrilal, where we wanted to try the famed makhaniya lassi.

This lassi is no ordinary lassi. It is made with saffron and served with a dollop of butter on the side. 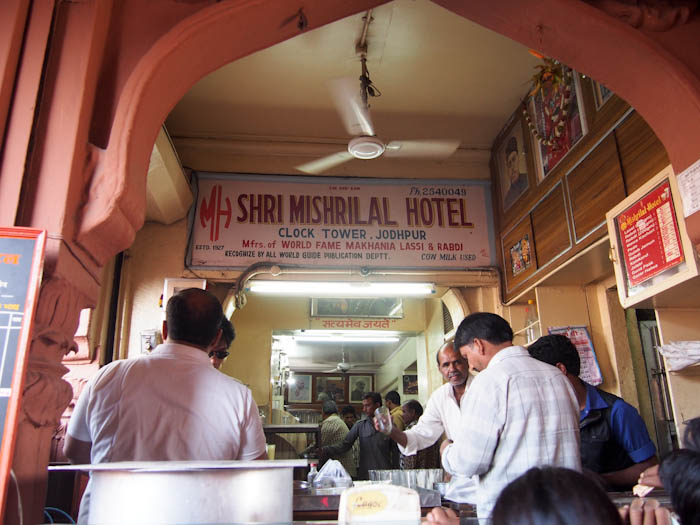 While butter on the side of your drink might not sound appetizing, this is no ordinary butter. It tastes like perfectly fluffed up heavy cream and really adds that extra bit of richness to the lassi.

This place is packed full of people. We almost couldn’t understand how things worked in all the madness. With all the servers running around with a dozen lassis in their hands it’s a bit of a hectice atmosphere.  That in no one takes away from the delicious drink in your hand though. We scooped up spoonfuls of this creamy and sweet lassi into out mouths while exchanging smiles with the Indian ladies sitting across from us. 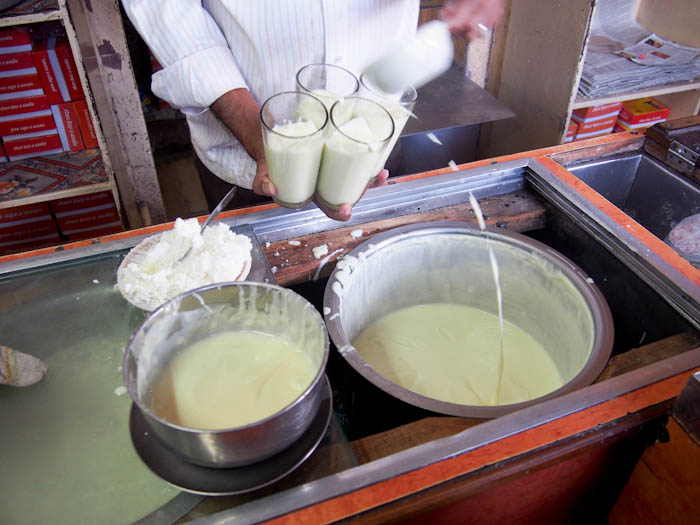 Definitely a must try in Jodhpur.

That wasn’t enough for us though. Next stop was Shahi Samosa, a small Indian fast food joint always packed with a long line.

While what we really wanted to try was a samosa they didn’t have any ready and so we settled for some of their other options. 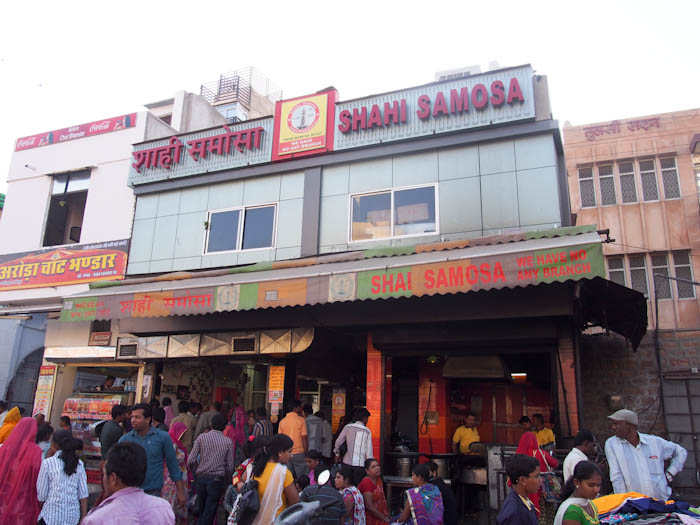 Dave ordered for us while I snapped pictures of the men at work. Check out that huge cauldron full of boiling oil? Being so close to that would make be more than a bit uneasy. 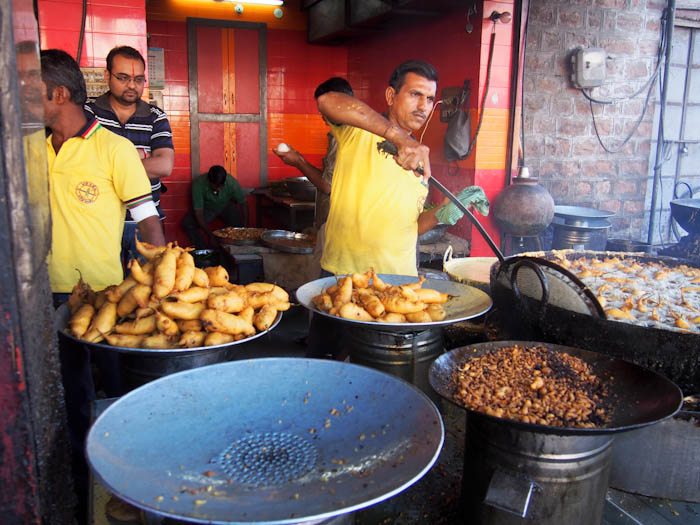 First we tried the Pyaaj Kachori, a fried pastry filled with a spicy onion filling. It is popular in Jodhpur and the vicinity and we couldn’t leave town without trying one. It looks similar to a samosa but the taste is a bit different.

Seriously delicious nonetheless and not too spicy. A perfect street side snack. 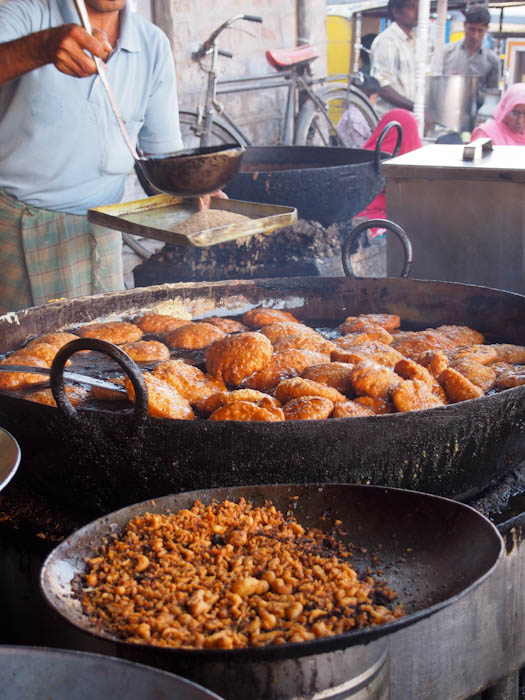 And then we moved on to the Mirchi Vada. At first when I saw them dipping these long green things in a gram flour batter and then in the hot oil I though, they’re frying whole cucumbers, hot odd.

But then I started to see what was really happening. These are cucumber at all. They’re large green chilies, filled with a spicy potato mix, dipped in batter and then deep fried. A flavor explosion in your mouth! I little bit of fire, a little bit of crunch, just perfect. Especially when you get them out straight out of the fryer, and they’re still sizzling in your hand.

The biggest challenge is waiting for them to cool down a bit so you don’t burn your entire mouth. 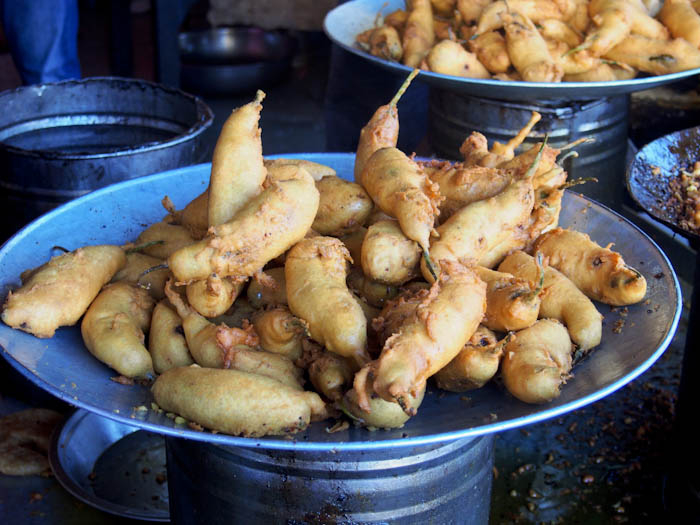 The following day the culinary tour continued as I signed up for my first Indian cooking class with Anil and Rekha at Spice Paradise. This incredible warm and hospitable couple has grown their humble little spice shop into a full culinary class and are now the #2 attraction in the whole of Jodhpur on TripAdvisor.

This was hands down of the best cooking classes I’ve taken during our travels. Rekha is such a kindhearted person and really puts everything into these cooking classes. 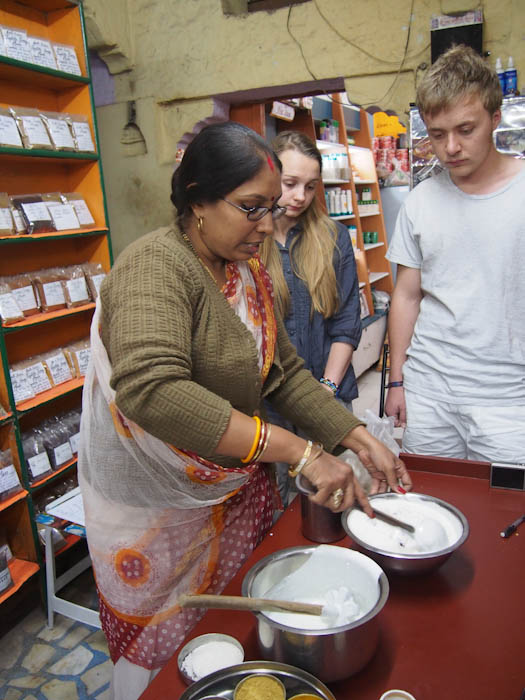 We started by making the traditional masala chai, a combination of milk and a masala spice mix along with black tea. The key is to bring the milk to a boil 5 times. This was the best masala chai I had in India. It was so rich and full of flavor, you can tell the spices are fresh . 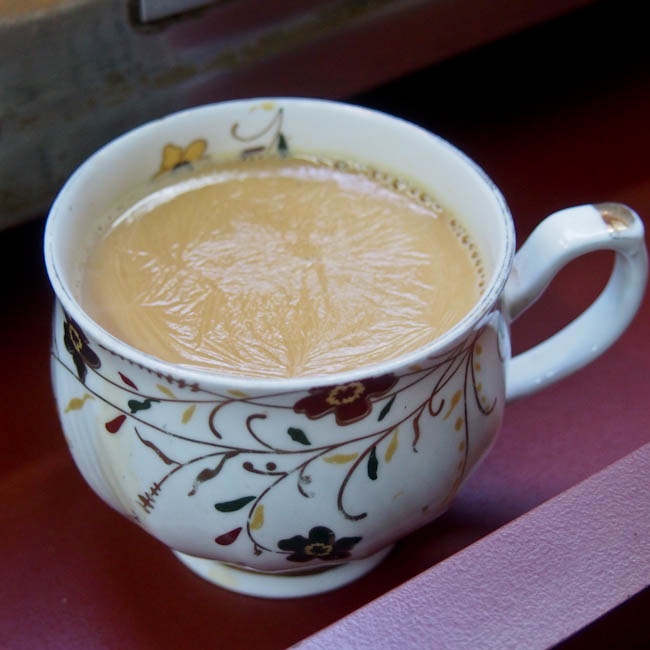 Next up was the cooking of our dinner meal. We started with a vegetable biryani – similar to a rice pilaf but with lots of different vegetables and spices. We split up the chopping between the other cooking class students. Unlike some of the other cooking classes I’ve taken, in this class we all split up the cooking responsibilities and made each dish together instead of individually. While I usually enjoy having my own stove and cooking utensils and making each dish from beginning to end myself, I quite enjoyed cooking this way as well. Rekha topped the finished dish with edible silver, which she told us is good for the brain, and apparently good to eat too. 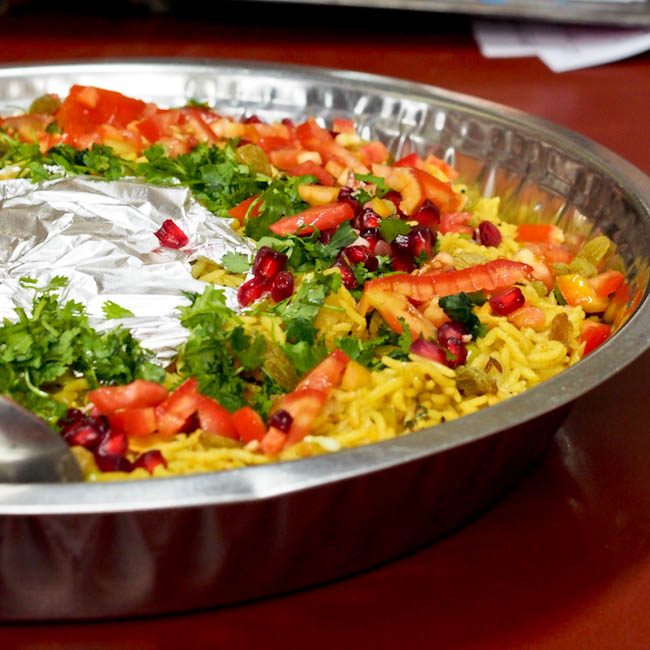 With the vegetable biryani we ate yogurt raita as a side, a dish made with yogurt, spices and various fruits. It was a bit odd combining a fruity yogurt dish with the rice biryani, but the creaminess of the yogurt does nicely complement the heavier rice dish. 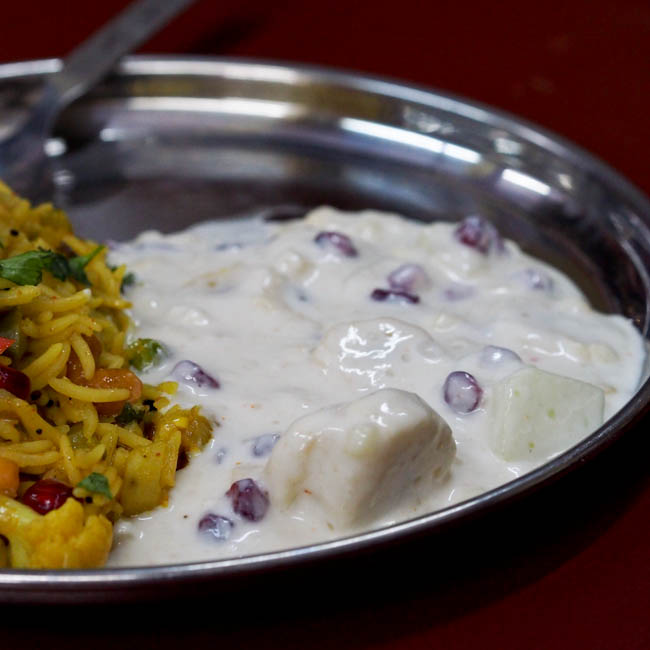 After our light dinner part one it was time for a drink. We made the same makhaniya lassis we had tried the previous day. It was just as delicious and served with the same dollop of butter on the side. Too thick to slurp up we cleared the bowls out with a spoon. 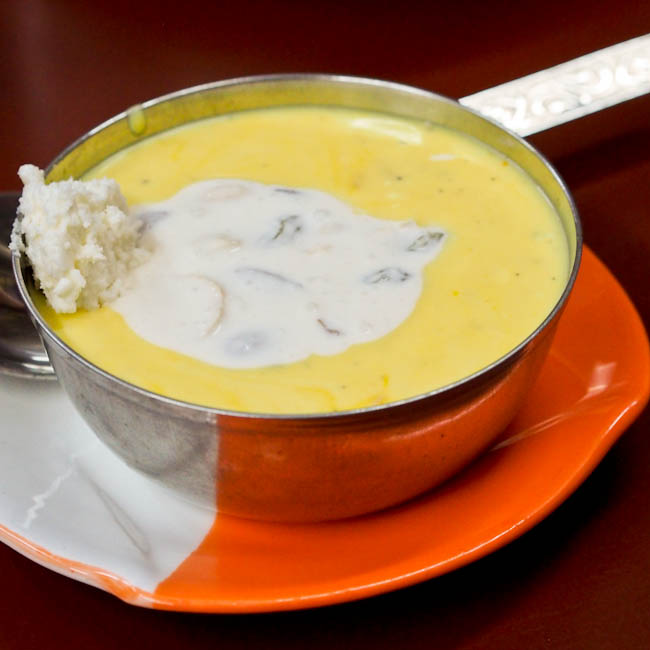 Part two of our dinner course was to be made next. For the curry we picked palak paneer – a spinach and tomato based curry with paneer (a firm Indian cottage cheese)  and cooked with spices and cream. This spinach is pureed and creates a perfectly smooth and creamy dish. 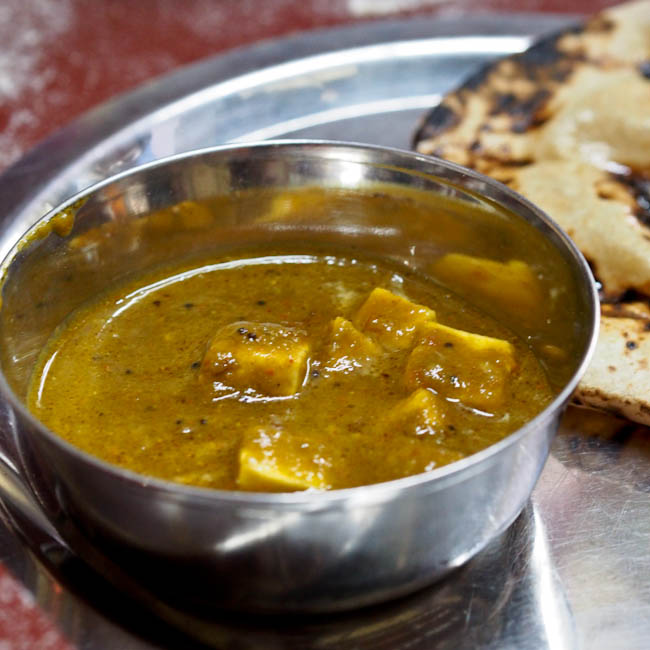 While that was cooking we got started on the breads, chapati and garlic naan.

The chapati dough is fairly simple, just flour and water, but the garlic naan has a little more to it, adding in some garlic, herbs and yogurt.

Making chapatis themselves is entertaining. After you roll out a small ball of dough and lightly pan fry it on both sides, you just put the lightly cooked chapati directly over the gas flame and wait for it to puff up.

If it puffs up that means you dough has been made correctly and you’ve done everything right. Then you flip it back over, it lightly deflates and the chapati is ready to be lightly buttered with ghee (a clarified butter).

The next part was making the garlic naan, which you just roll out and put on a hot pan with melted ghee on it already. To cook it you just flip it over on the pan and add ghee to the process. Then when it’s ready you add a bit more ghee. It’s all about the ghee here.

Now the garlic naan is a fairly simple Indian bread but this one was incredible. Seriously the best garlic naan of my entire life. The bread was perfectly tender and buttery with a kick of garlic and fresh herbs. Where can I get more of this? 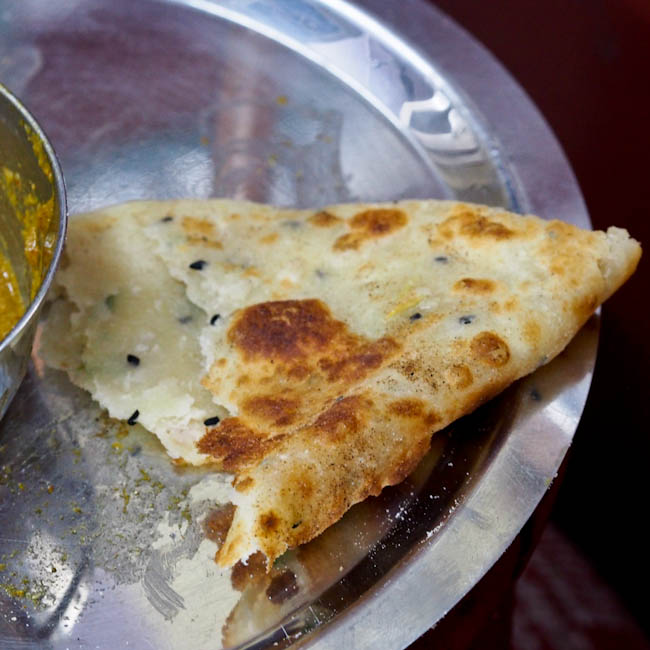 Even though we were already all stuffed to the brim after our Indian feast, there was more, kava resari for desert. This is a fairly simply dish made by cooking semolina flour with sugar, then adding some food coloring and forming the mixture into a cake. Once it cools down it is decorated with nuts, raisins, edible silver, rose petals, whatever you’ve got.

I didn’t have high expectations for this one, thinking how good could cooked flour really be? I was wrong though, apparently cooked semolina with sugar really can make for a real good dessert. 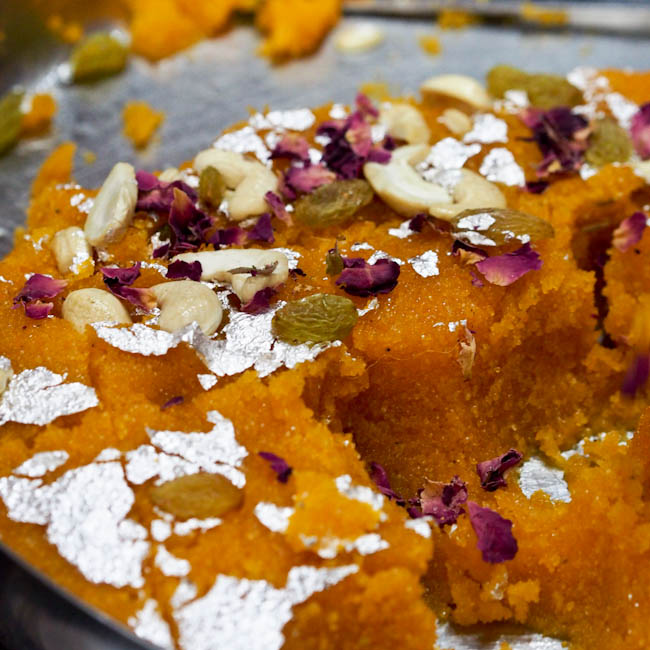 The cooking class was awesome not just for the recipes we made together but for the warm the Rekha exudes. She provided so much information about Indian cooking, the culture and even her own family history that we were all truly touched by her experiences and the radiating smile she always had.