Jonny Blair is a self confessed travel addict, he grew up in the seaside town of Bangor in Northern Ireland in the 1980s. But since leaving his homeland a decade ago, Jonny had managed to live, work, travel, party and watch football all over the world. His adventures have taken him to all seven continents and over seventy countries providing Jonny with enough travel memories to last a lifetime. However, he has no plans to quit his nomadic lifestyle as his passionate travel blog Don’t Stop Living clearly shows! He lives his life by his blog’s very title! 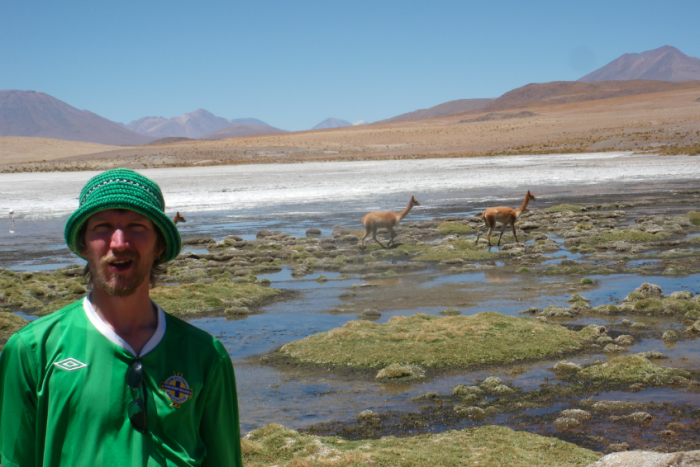 I grew up in Bangor in Northern Ireland in the 1980s. I had a happy childhood, playing football down the park, drinking a bit too much in my teens and enjoying a few trips abroad thanks to my hard working parents. However Northern Ireland has its political problems and troubles so a part of me always wanted to get out there and see the world.

I was 11 when I did my first trip without my parents when I went to Amsterdam with the school and I got a real taste for travel. By the age of 21 I had been to France, Greece, Spain, USA and Canada. Then when I hit my mid 20s and had the money, I ventured a bit further! I based myself in the south of England and managed to backpack through Europe on my holidays before finally visiting China in 2007. Since then I have worked and backpacked my way through South America, southern Africa, Australia, Antarctica and Asia. I moved to Australia for two years in 2009, then made Hong Kong my base from 2011 until now. I’m currently in Hong Kong!

I have always been a writer, but I didn’t start my travel blog until 2007. I was in Toronto, Canada backpacking at the time and met two other travel bloggers who gave me the inspiration to start. I stole my title “Don’t Stop Living” from graffiti on a wall in Toronto and it was really just a blog to tell my stories. I didn’t expect many readers to be honest, but I’m surprised by the fact I now have my own self hosted website, over 1,000 visits a day and have written over 1,000 blog posts.

2. Let’s talk experiences – what has been the best experience you’ve had on the road? The worst?

Of course there are many “best experiences” from my travels, but the standout moment has to be the very second I stepped foot on Antarctic land for the first time. It was a crisp Monday afternoon with a light snowstorm and nonchalantly I landed on the island of Barrientos. I had lived my dream and been to Antarctica on the cheap! It was a wilderness of white. I loved it. I was literally blown away!

There have been a few bad moments, I don’t normally talk so negatively and deeply but I once drove my car to the edge of a cliff in the south of England and was ready to kill myself. I was that close. I went through a bad time and got through it, with the help of some close friends. Aside from that the usual getting ripped off, escaping a mugging and being refused a visa are bad moments too, but they are all part of travelling…

My best mate actually inspired this series as he told me I needed a lot more crazy stories on my blog! So I decided to dig them all out of the archives. I wrote a list of crazy moments I could write about, got as far as 80 and then started writing them, so there’s a load more to come!!

I once met Roger Federer in the street in Melbourne which was surreal. I somehow managed to get in trouble with the police in both Denmark and Switzerland on my European jaunts (once for climbing on a roof, once for not being able to find a toilet).

There was also the day I whipped my shorts off and was swimming naked in Antarctic waters! That was probably the craziest moment, and the coldest I’ve ever been.

There will be a lot more of my “The Day I…/ The Night I…” stories to come!

4. You used to work on car ferries – what was that like?

I’ve had a load of different jobs on my travels but the car ferries was great. It’s the only real time I ever got paid to travel!! I worked on local and international car ferries. The local ones were short trips to the Isle of Wight (England) and back. I basically looked after passengers and served drinks on the bar. I loved it. On quiet journeys, I’d be planning my next adventure, admiring the sunsets or having a cup of tea!

I also worked on the England to France car ferries, which gave me some amazing travel memories. On my days off I managed to tour round 5 of the Channel Islands, including Sark and Herm, well off the beaten track and only made possible on a cheap budget thanks to that job! Sark is Europe’s last feudal state and has the world’s smallest prison on it – the island has a population of less than 200!! So I’ve actually been to France over 100 times, but mostly in my work uniform so it wasn’t all backpacking! 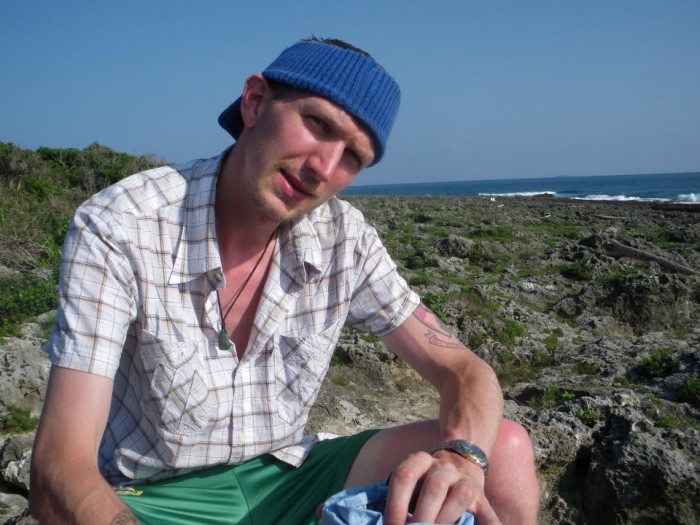 5. For the last 10 years you’ve traveled to 70 countries spread out over 7 continents – how do you afford it?

In two words – working hard. I’ve had something like 50 different jobs (most of them not even related to each other!) and I try to maximise my incomes by taking on several jobs at the same time so I can save like hell! For example in 2010 I slept in my tent in the mountains of Poatina in Tasmania, Australia and worked 12 hours a day for 7 days a week on broccoli farms. I hadn’t seen a major town or city for almost two months. When I finally made it to the town of Launceston and checked my bank account, I had accumulated enough money to book my Antarctica trip so I did! I then worked as many hours as I could on farms and in a pub so I could do South America while I was at it. I currently teach English in 3 schools, welcome guests to Internations Events and guest write for numerous magazines and online publications. I write about my various jobs every week on my Working Wednesdays series.

6. What are some of your interests outside of traveling?

This is an easy one to answer for me. If I didn’t travel, I’d either be watching travel DVDs and football with my Dad or I’d be down the pub with my mates having too much beer and watching a load of sport on the telly! Aside from this I write for football magazines, I’ve recently done some online stuff for the Unofficial Football World Championships website and currently have my own column in the Glentoran matchday programme (based in Belfast).

I also play guitar and love it when I find a hostel with an acoustic guitar in the lounge! 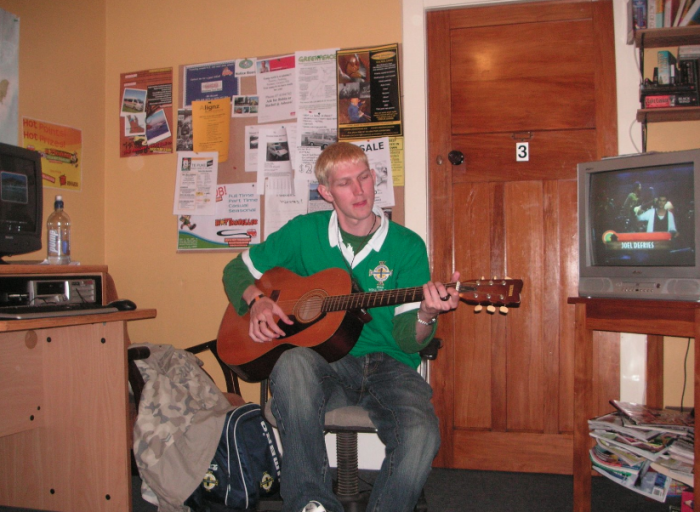 7. What are your upcoming plans, both travel and non travel?

Travel wise, I’ve totally neglected the Middle East and North Africa until now so they are next up. Before that I’m doing a week in North Korea and 2 more weeks in China, while I’m based in Hong Kong. Then it’s off to explore the Middle East. I’m planning on doing Jordan and Azerbaijan first! I can’t wait!!

Non travel wise I have promised my friends and family to visit them at some point. I’m a really bad brother to my siblings – they literally never see me. I’ve also only seen my football mates for 2 days in the last 4 years so I need to make it up to them. The same with my whole family. I’d love to go down the pub with my Dad and relax or have a coffee with my Mum! My girlfriend and I are also planning to get married at some point so I guess there will be a nomadic wedding somewhere!!

8. What do you miss most about being home?

Four “Fs”!! The food, the football, my family, my friends. Our Northern Irish “Ulster Fry” (a full breakfast) is a meal I’ve been craving for years, I also miss our cheese and yoghurts believe it or not! I miss watching my football teams Glentoran and Bournemouth. Of course I totally miss my family and friends. Apart from that, I’m good to travel the world!!

9. Do you ever think about calling the quits? If so, any idea what you’ll do when you “settle down”?

I met my girlfriend three years ago in Antarctica and we are both big travellers. Neither of us plan to properly “settle down” just yet. I don’t own a car, a TV or a bed, so until that day comes, I’ll continue to be the travelling Northern Irishman!

If I do settle down, I’ll definitely want to watch a load of football, eat decent food with my girlfriend and drink beer down the pub. Job wise, I’d like to be a full time travel writer or blogger. I’ve already my hardcore shifts cleaning toilets, milking cows, serving in bars, doing PR and teaching English. When I settle down, I will be relaxing for sure!! 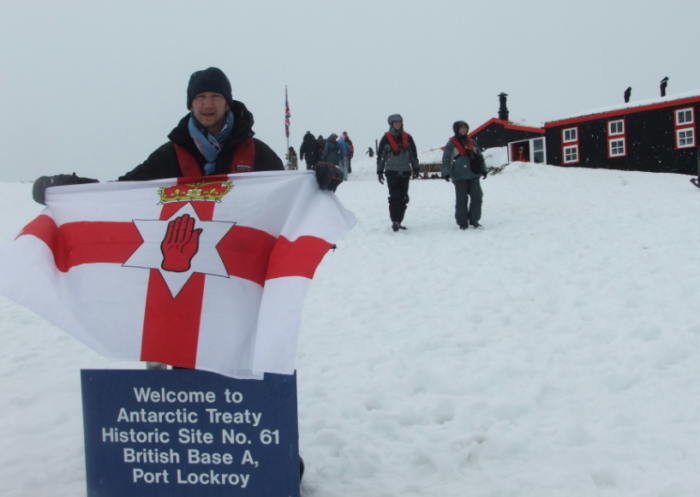 4 Responses to Interview with Jonny Blair