How We Planned Our Route 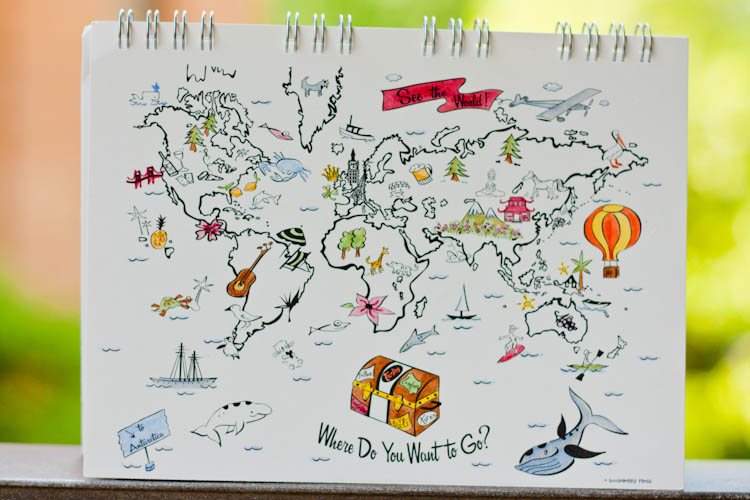 While there is no set algorithm to planning your route, there MAY be a few things that are worth taking into consideration. Above all, however, the route is your route and like your wedding day, college graduation, or any other life changing event, you should plan it out how you want to. This is your travel excursion and under no circumstances should you feel compelled to walk in another traveler’s footsteps.

In Dave’s and my case, we had 2 years to allocate with our sights set on extensive travel throughout Europe and Asia. While we had gotten our feet wet with some previous travel in Europe, Asia was completely unexplored territory. This, of course, is a blessing and a curse, as it allows for a wide open array of route possibilities, from which you then need to narrow down your picks. Here is how we structured our thinking:

Too far out of the way, and Vicky used to live there.

Admittedly there are still many places left in the US (and Canada) that we haven’t been. Sounds like a road trip for another time. Can anyone say, A Couple Travelers – the sequel?

Have our minds set on conquering two continents and with South America so disconnected from the others it makes for long and expensive flights.

Asia remains uncharted territory and therefore would fill our need for to explore places completely unlike anywhere we’ve ever been before. In terms of countries, since we literally have not been anywhere in Asia we want to spend a good deal of time in all of the South East/Eastern Asian countries and islands with the jury still out on central Asia (though don’t tell our parents we’re even considering going there).

The lowest hanging fruit. Familiar due to past travels and easy going for English speaking tourists. Due to budget constraints we will spend more time in the Eastern European countries while minimizing time in Western Europe and skipping the countries we’ve already been to.

Overall: Considering our appetites, time and budget we thought that Asia and Europe would be the most logical pair for our two year adventure.

There are various articles and websites with published average daily costs per country and sometimes even city. Here are a few of the ones we referenced to come up with our assumptions around costs:

It comes as no surprise to find out that western Europe borders on outrageously expensive whereas South East Asia can be shockingly cheap. With 2 years of travel spending to account for we wanted to divide our time between the two to balance out costs.

Conservatively, we are budgeting $1000 per person in Asia and $1500 per person in Europe. Our trip will start in Asia where costs will be low and if we end up overspending  we can adjust accordingly our Europe itinerary, specifically, minimizing our time in Western Europe.

Eastern Europe, though not as cheap as Asia, is significantly cheaper than Western Europe so we will be spending some time exploring those countries as well. Most importantly we will be meticulously tracking our expenses and monitoring the dwindling bank account to adjust the destinations further along in our trip in our monthly budget updates.

Weather can be volatile in many of the Asian countries we are considering. When planning a two week vacation it is easier to coordinate and pick the best time of year to go, but in our case with continuous two year long travel it becomes more difficult to map destinations trying to follow the best weather along with the most efficient route. Our goal in traveling from place to place is to minimize travel time and cost – meaning we can’t just fly from Asia to Europe and back again multiple times to avoid monsoon season.

To address the dangerous rainy season in Asia we are starting our trip in September and traveling from Japan, South Korea, China through to South East Asia and further south into the islands. We are trying to hit each place during its most desirable season but, naturally this will not be possible with all the countries. We hope to spend September – June/July in Asia (yes we will hit some rainy seasons towards the end there), spend the rest of the summer in Europe and then fly back to cover India and Nepal in the fall (to escape the deathly summer heat there). From there we will head back to Europe starting in the Southern countries to escape the bitterly cold winters, progressively moving into the northern countries in time for Spring and Summer.

Based on our country specific research we have identified the following months as the best time to visit (in terms of weather) the following countries.

Note: Weather is inherently unpredictable, this is at best an estimate and for that reason we ranked weather as our third priority for consideration.

With our extensive country and region list we are bound to hit some snags in terms of rules and regulations. While some countries have visit restrictions others have entry/exit regulations. Some of the major issues we’ve run into are the Schengen zone rule (which has taken over the majority of Europe), day limitations in Asia countries (ranging from 2-4 week stays), and recently India changed their rules forbidding you from re-entering the countries within 2 months of your initial entry date. The Schengen rule is the most restricting and frustrating to work around. For more information about the Schengen rule check out Nomadic Matt’s recent post. As for us, we thought the best solution would be to split up our time in Asia, spending the summer in Europe, then spending 90 days out of Europe (in India and Nepal) and then returning for another 90 days in the Schengen zone. As for the Asian countries’ tourist visa restrictions we will just limit our time in those countries (example –  one month in Cambodia).

This is first and foremost a budget trip. While we didn’t want to have budget overly dictate our route, we are certainly considering it as a way of “sharpening” our travel. Here is how we plan to minimize costs in the following areas:

A few countries, like Bhutan and Tibet highly regulate the back packing experience. Specifically, the government restricts travel to guided tours, which are outlandishly expensive and out of our budget.

Tibet: Visits restricted to guided tours only, between $700-$1000 for total package (approximately 1 week).

The trade off between plane and overland travel is money vs time. We chose to focus more on overland travel because we feel our main constraint is budget, instead of time. To compensate for this, within overland travel we are opting for night buses/trains/ferries in order to maximize efficiencies for time and lower accommodation expenses. As a side benefit the land route is more scenic and always more of an adventure anyway.

In terms of daily living expenses we will try to couchsurf where we can or stay at hostels/guesthouses.  For more information about couchsurfing from a traveler’s perspective check out our post on how to use couchsurfing.org. For longer stays we will consider apartment rentals instead of hostels/hotels through the website Airbnb.

For food we will mostly likely be living strictly off of street food. When we will be renting apartment we will primarily be cooking for ourselves.

Where we won’t be economizing is sights and experiences – we would rather stay in a less than luxurious guesthouse but have the means to go on a gorilla trek or hire a guide to hike to mount everest base camp. We’re in it for the adventure and we’ll spend accordingly.

Without further adieu I present our travel route:

5 Responses to How We Planned Our Route