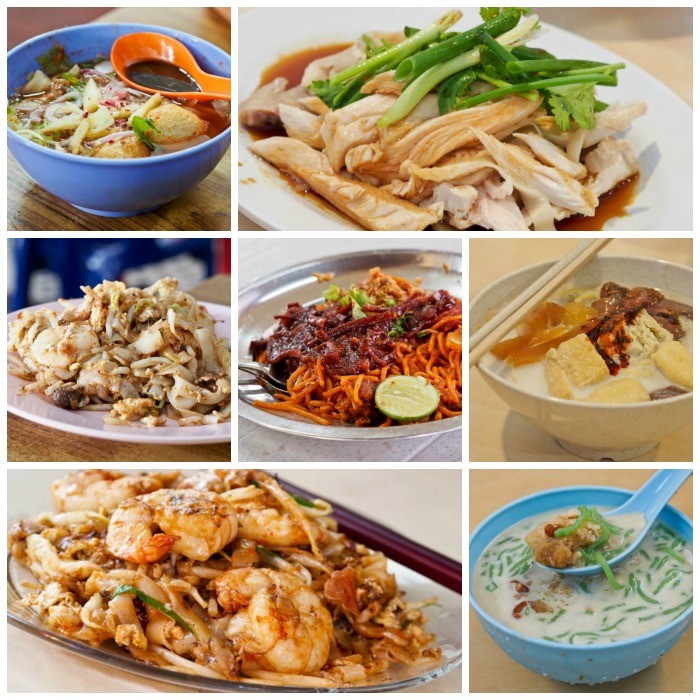 Penang is hailed as one of the world’s greatest street food destinations. You can easily get to this island via plane, bus or even find a deal cruise. Though we were renting an apartment here and I was doing a lot of cooking at home, no visit could be complete without a full day allocated to sampling the various regional delicacies.

And so after lots of online research I put together a self guided foodie walking tour through Georgetown. I had a list of twelve places but for one reason or another we only made it to six of those (probably because Dave didn’t have much of an appetite since he stayed up all night working… or playing free pokies. Each place we tried was absolutely delicious and it would be a sin not to share them here with you.

So join me on this Penang food tour (take a look at the map at the end of the post if you’re interested in using this as a guide). 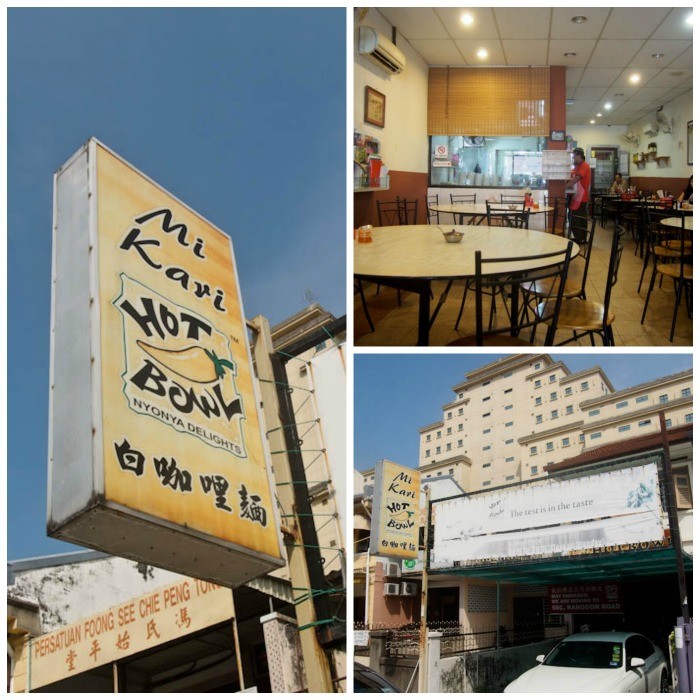 I had read a lot about this small cafe, famous for it’s curry mee and Pak Cham Kai (Hainanese deboned chicken) so it was first on our list.

Curry Mee, known worldwide as laksa, is a soup made up of noodles served in a creamy chicken stock with coconut milk. Normally this dish is red in color thanks to the ground chili and spice paste, here though the chili paste is served on the side so the soup itself is a light mild color. The soup comes topped with bean sprouts, shrimp, tofu puffs, cockles and coagulated duck’s blood. I was feeling adventurous enough to even slurp my soup with the blood cubes in them. 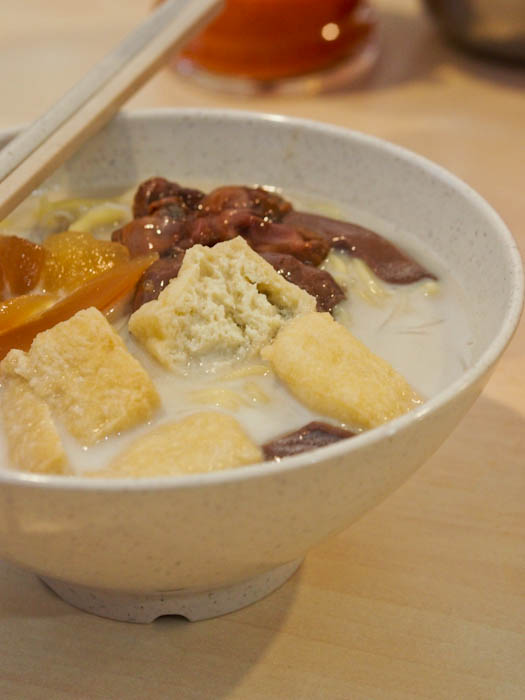 The soup is incredible, it’s soft and creamy and I loved that you could control the level of heat yourself by adding in as much or as little of the chili paste as possible. The soup itself and the chili paste is unbelievable fragrant and you just want to breathe it all in. I added in a little bit, and then a bit more, testing myself, seeing how spicy I could handle it. 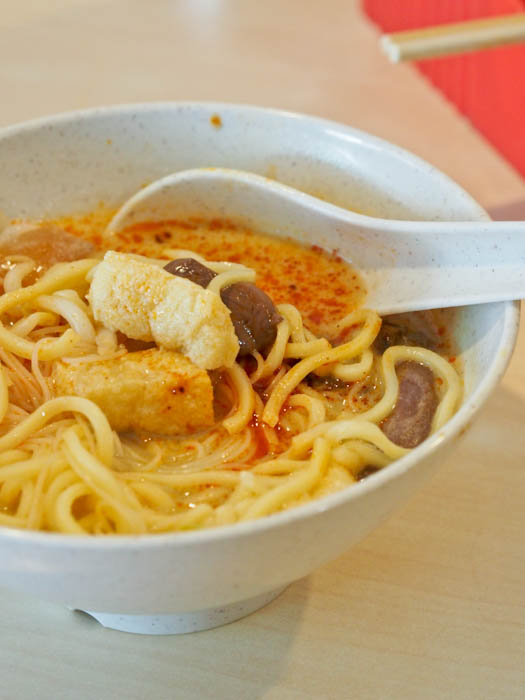 Our next dish was the deboned chicken with soy sauce. This tender and juicy chicken is made even better by dipping it into the mild soy sauce mixture. The sauce itself is both sweet and salty in nature, and doesn’t take over the taste of the chicken.  The crunch from the green onions and cucumbers is a nice complement. It truly is impressive that a simple dish like boiled chicken could taste so succulent and tender. No dry chicken here! 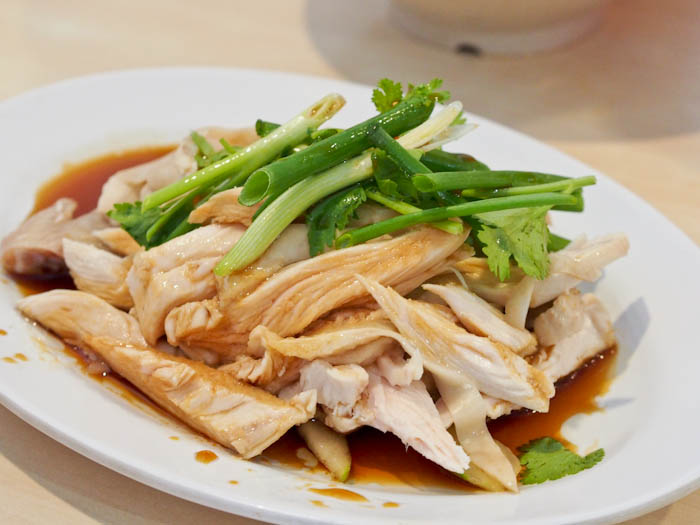 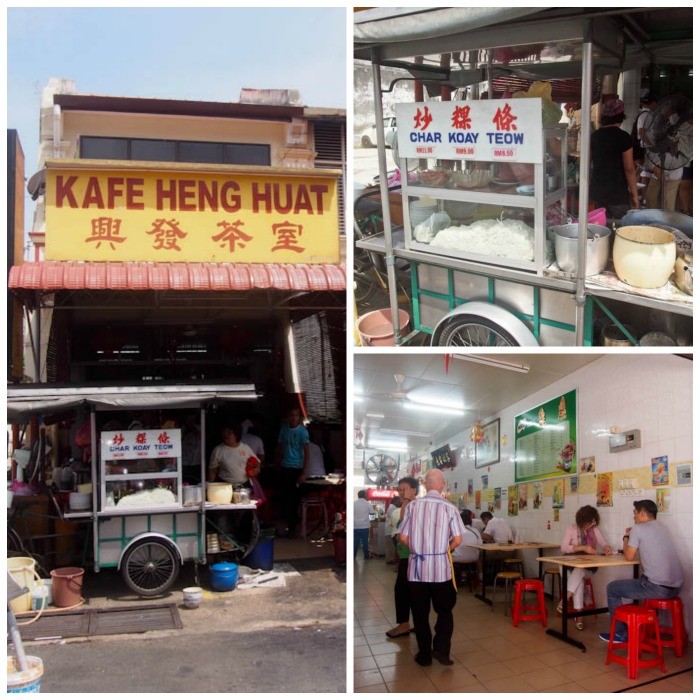 There is a bit of controversy regarding this Char Koay Teow stall as the red hat lady that mans the wok is described as flat out mean and nasty all over the internet. Regardless, this was mentioned as one the best spots to sample the noodle dish in town, so even a cranky old lady couldn’t deter me. The stall is located in front of the cafe where you can sit down and enjoy the dish. There were several ladies working there so I just quickly shouted out our order and took a seat. Thankfully I didn’t have to deal with any moodiness from the red hat lady herself. No feelings hurt.

It took a bit for the dish to arrive and I was beginning to get impatient, but finally there it was, a steaming freshly made plate of noodles topped with tiger prawns. Char Koay Teow is a classic Malaysian noodle dish made with rice noodles stir fried with shrimp, soy sauce, shrimp paste, cockles, bean sprouts and chives. 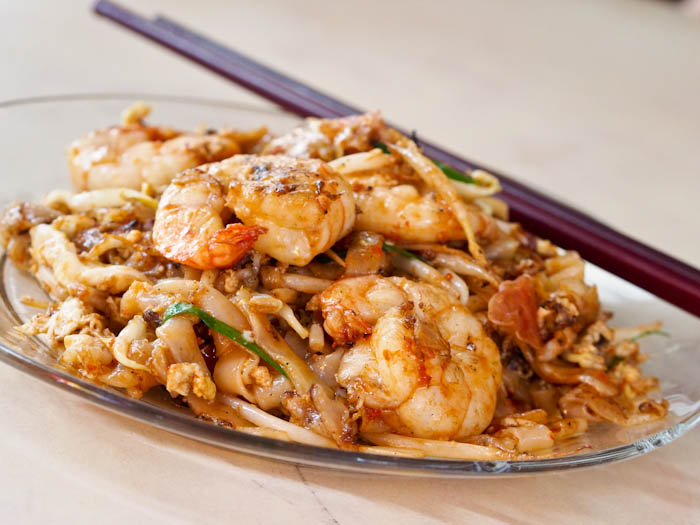 I went for the special which includes enormous Tiger Prawns – why not get the best right? Since the dish is traditionally made with pork lard it’s not the healthiest of dishes but it is worth every single calorie.

The noodles have that smoky wok taste and smell and are just lightly charred, and practically melt in your mouth. The prawns are succulent and fresh. The balance of flavors is simply exquisite. The dish is rich in flavor, without being too oily and has just the right level of spiciness (though it was too spicy for Dave). It might seem outrageously expensive to the locals to be paying 11 RMB (a little over $3) for this noodle dish, but for me this was just perfect.

I would have happily ordered a second plate if only I didn’t need to save room for more foodie stops. 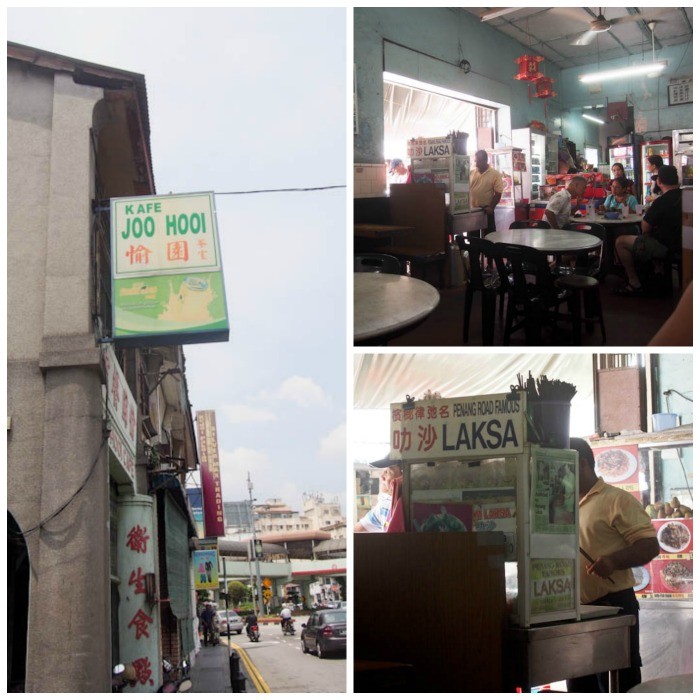 Penang is famous for its assam laksa, which is nothing like the traditional Malaysian laksa (the curry mee we sampled at stop #1) is made with poached and flaked mackarel and tamarind. The soup has a fishy sour taste to it which is further magnified with the addition of shrimp paste, pineapple and mint. Seriously an odd sounding combination. But, as CNN has this listed as the #7 best food in the world, I was not going to miss it. Galangal and lemongrass also add to distinctive flavor.

The soup is thick and spicy. My nose was instantly running, but I couldn’t stop. The flavor is quite intriguing, it’s hard to put your finger on it. You start to taste the sourness, and then a bit of fishyness but then the pineapple and mint just completely confuse your taste buds and have you wanting more. The soft sweet pineapple and strong minty flavor really start to neutralize the sourness of the broth.

This is definitely not the soup for everyone and I can instantly see why some people would flat out dislike it. It has a very strong and particular taste so if you’re sensitive to real defined flavors this won’t be for you, but I for one loved it. Dave on the other hand would have rather been playing vogueplay.com/au/ than eating this soup. Completely unlike the Malaysian laksa served elsewhere, this is definitely a soup I’d love to learn how to make. 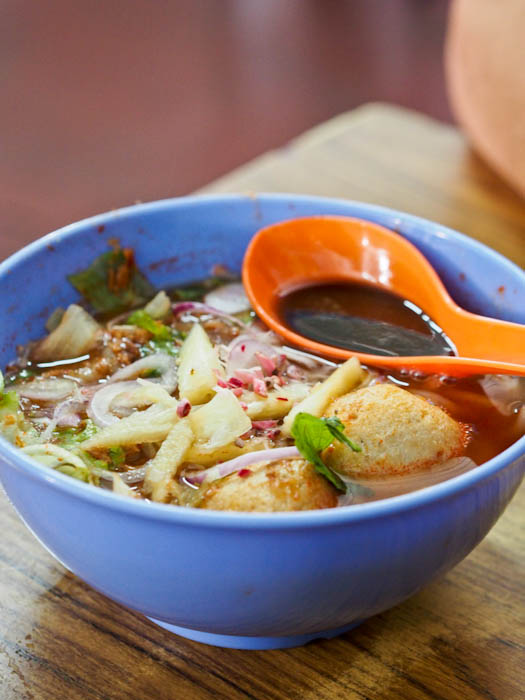 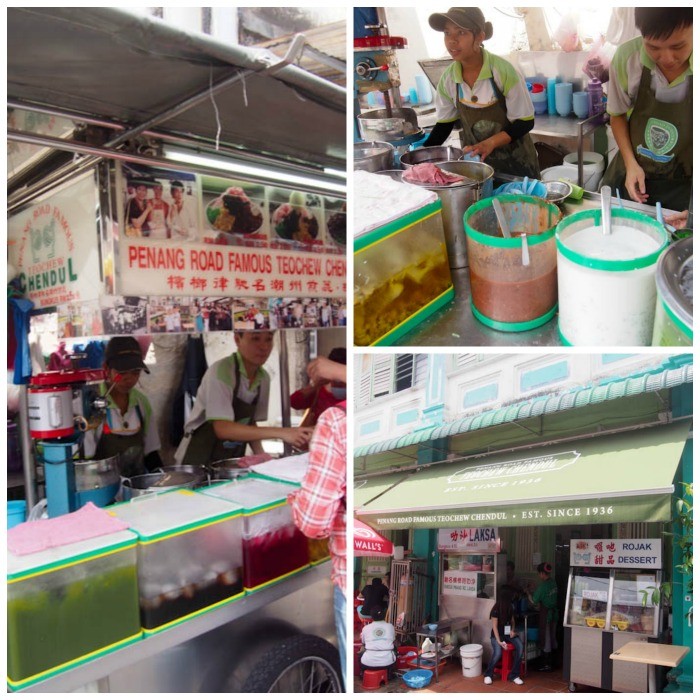 Our next stop was a cart located right outside the Joo Hooi Cafe, and here we would sample our first Malaysian dessert. Cendul is made with shaved ice served in a syrup of coconut milk mixed with palm sugar and topped with green colored rice flour jelly noodles and red beans.

Seriously odd. Not necessarily the most appetizing looking dessert right? With all the locals standing around the cart quickly slurping this dish though it had to be good.

After one spoonful I could see what they were thinking. The coconut milk mixture is incredibly creamy and just sweet enough, almost having a bit of a slight coffee taste to it. The shaved ice is incredibly refreshing, especially after a spicy bowl of laksa. And the green noodles and red beans aren’t even bad themselves either.

This is perfect on a hot Malaysian dish and just what you need to cool your body down a bit. 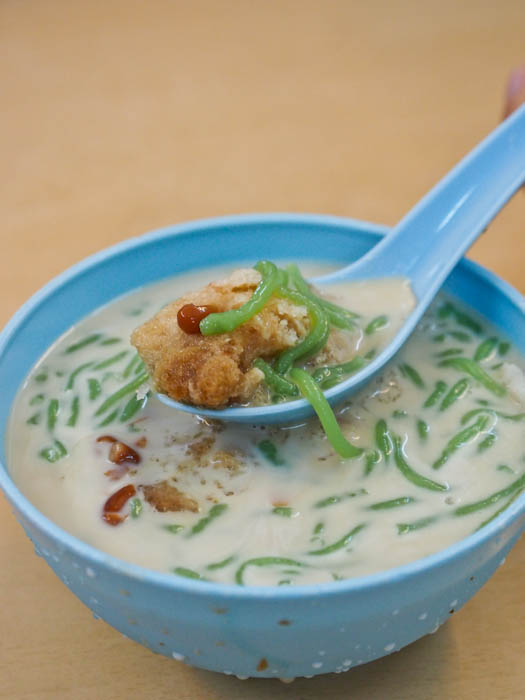 What we ordered: Char Koay Teow with duck eggs (5.50 RMB) 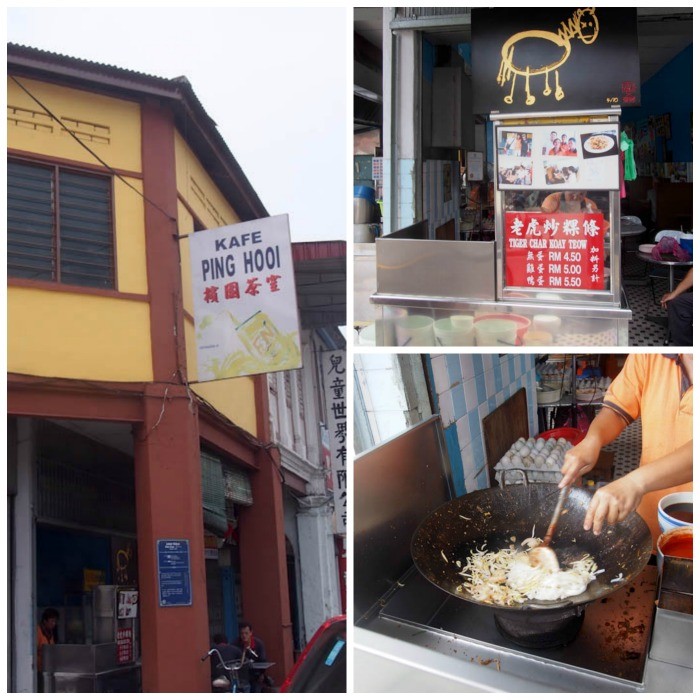 Since Dave wasn’t able to enjoy the first Char Koay Teow because it was too spicy we added in a second cafe so that he could enjoy this magical noodle dish too. To try something different I opted for the dish with a duck egg instead of a regular egg and asked for it to be not spicy (hence the lighter color). This char koay teow still had some pretty big prawns in it though nowhere near as big as the ones in stop #2, but for half the price you really can’t complain.

While this char koay teow was delicious I think I prefer the one on Lorong Selamat, that one seemed a bit more flavorful though it is hard to compare the two since this one had no spiciness added to it at all. Either way both places serve a tasty and flavorful noodle dish so feel free to go with either. 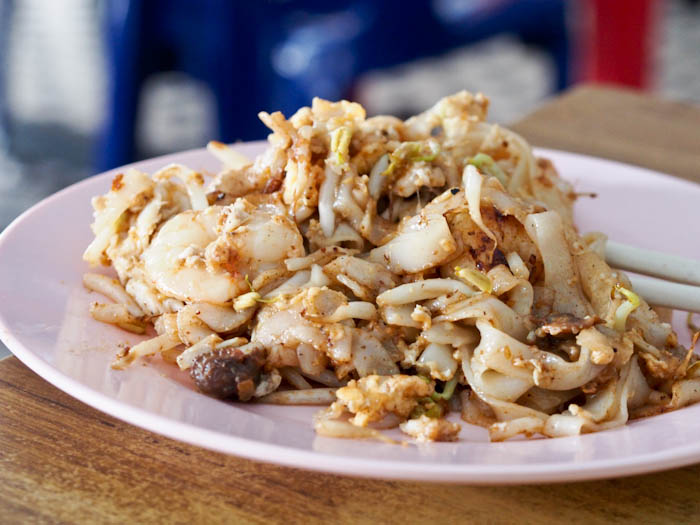 What we ordered: Mee Goreng (4 RMB) 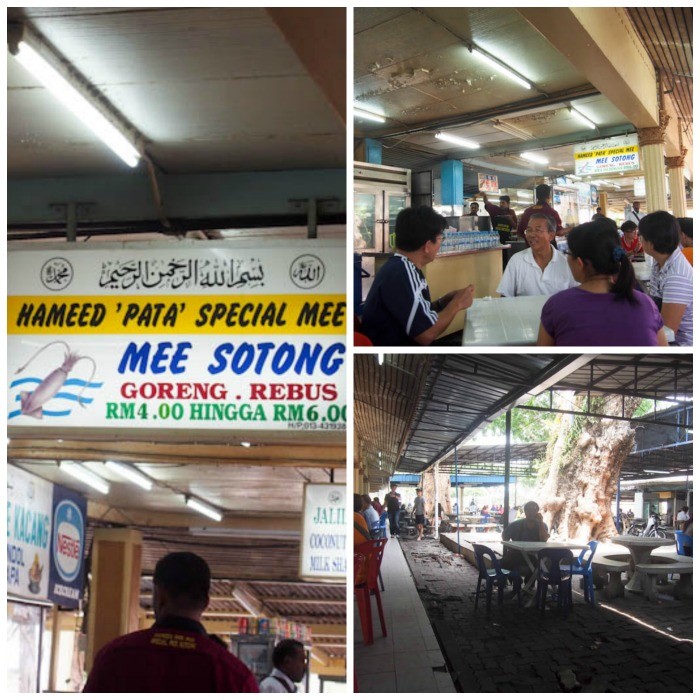 After a visit to Fort Cornwallis and while Dave was trying unsuccessfully to catch a cab I wandered over to this open food court to see if this is in fact where the Hameed Pata stall was. I was in luck – here it was. I quickly plopped down and order a plateful of mee goreng. This is an Indian style fried noodle dish made with yellow noodles that are first blanched before being added to the wok. Ingredients include potatoes, tofu, flour fritters and chilies. The gravy is made from chilies and tomato puree. The dish is served with a fresh lime wedge.

As this plate of sludge was brought over to me, I gulped and thought to myself, I hope this is better than it looks. Expectations were pretty low. And with one bite they were blown out of the water. This mee goreng is a-mazing. The noodles are soft and perfectly soak up the tomato chili sauce and the hint of lime adds in a refreshing sour element. I licked my plate clean. This was the perfect last stop to the day long food tour and I was sufficiently stuffed. 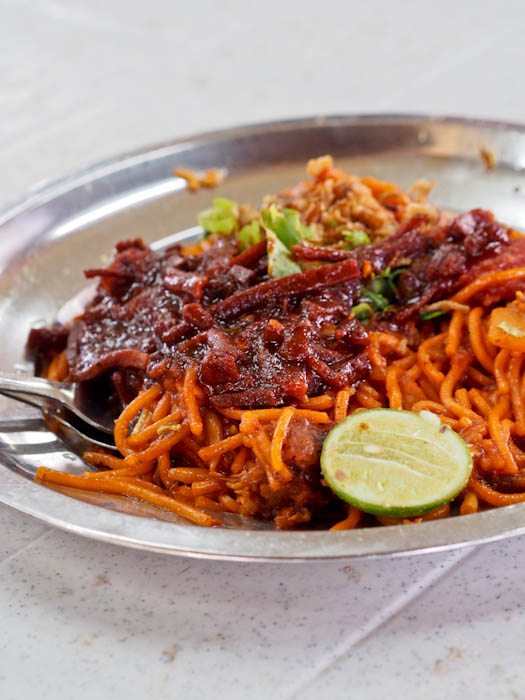 A self guided food tour through Georgetown in Penang is a great way to explore the diverse and delicious Malaysian cuisine. Below you’ll find a walking map of our route so you can follow along yourself.

To learn more about Malaysian food check out this food trail guide.

The other places included on my list where we didn’t get to eat (either they were closed or we didn’t find them):

Have you been to Penang? What’s your favorite place to eat here? Please share some of your favorite dishes and places in the comments!

14 Responses to Self Guided Food Tour in Penang, Malaysia