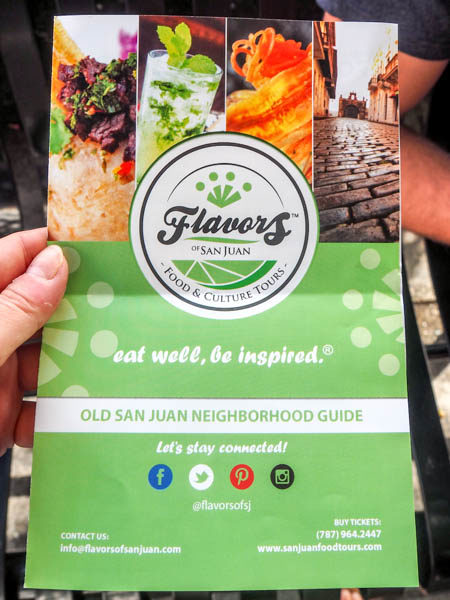 Time for another food tour! This time Dave and I were treating Dave’s mom for her birthday. She had never been on a food tour before and we thought this would be a super fun way to learn about the history & culture of Old San Juan while also sampling the local cuisine as we made our way on a guided tour of the old city. And so we were off with Flavors of San Juan Food Tours.

We met our bubbly tour guide Shannon in the center and were handed a brochure with a map, list of our stops and a whole page worth of coupons at other restaurants.

I love it when a food tour provides you with a printed set of info with a map, spelling out where we are, where we are going and listing all the stops. This just seems like a great organized way of presenting information. 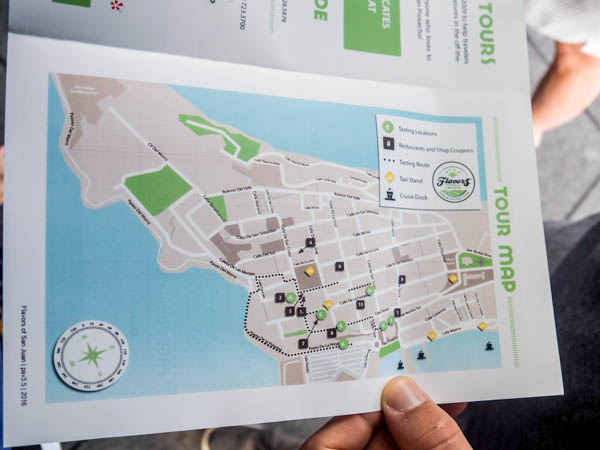 Once our group of 13 was ready we were off. We learned than out guide Shannon, a NY native who came to Puerto Rico on vacation five years ago and never left. Her Spanish major in college with a focus on Caribbean studied seemed perfectly at home here in Puerto Rico. All throughout the tour Shannon was super bubbly and animated, even makes jokes about her own NY accent – which is very similar to that of the actress on The Nanny show. 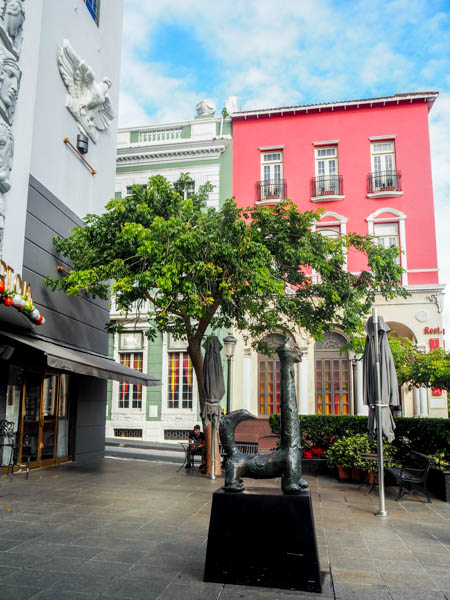 Before we made our way to stop number 1 it was time for a bit of a history lesson, starting with 1493 when Colombus encountered Puerto Rico, to 1508 when the Spanish came back in full force with Juan Ponce de Leon, all the way to 1630, which was the beginning of the building of the city walls. 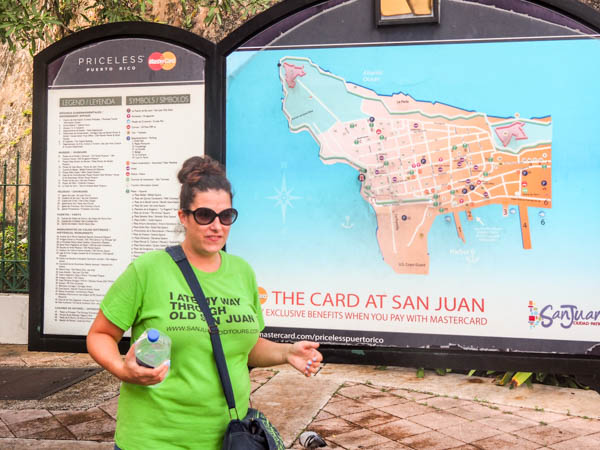 We also learned why Puerto Rico was so important. First of all it was the first and last island you encounter on the 3 month journey between the old and new world, secondly the trade winds naturally take you there from Spain and last of all it was the key to the whole of the West Indies. 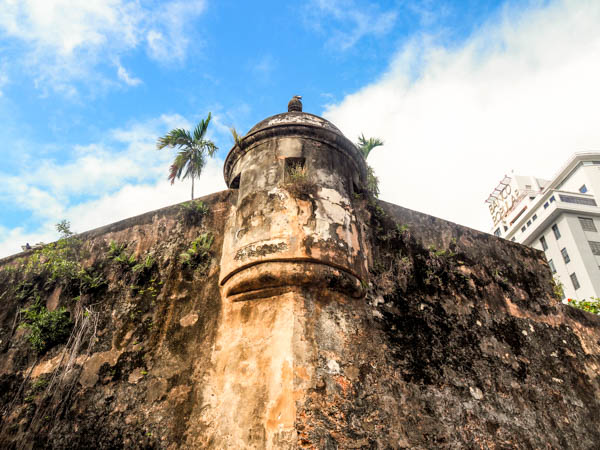 Now we were ready for stop #1. A gastrobar where the owner and chef work together to create the menu and decor. It is the only completely open air restaurant in San Juan, and the ceiling and tree work together in order to create an El Yunque rainforest experience for the visitors. 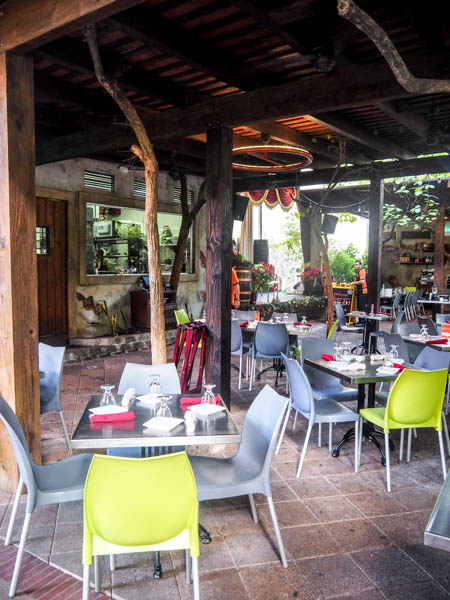 Here we would first be trying a Pina Colada – a drink invented in a hotel in Puerto Rico in the 1950s. But first we received a bit of a rum lesson from the bartender. This restaurant carries 72 bottles of Puerto Rican rum and the bartender tries to recreate classic cocktails using rum instead of the traditional hard alcohol. We got to learn about Pitorro – essentially Puerto Rican moonshine which can be as high as 160-200 proof. 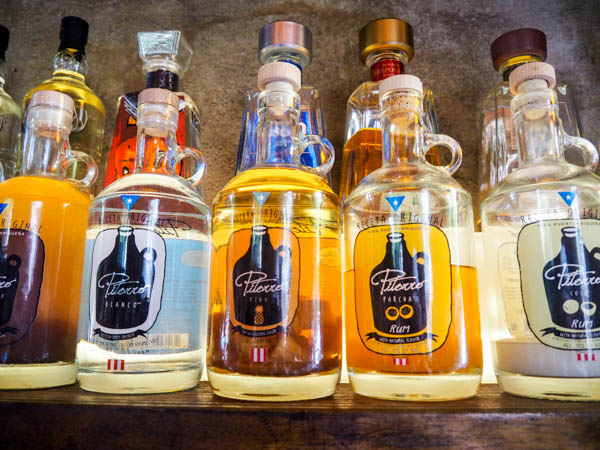 Let me just say the Pina Colada was delicious. Super light and refreshing yet sweet and fruity. One of my favorite cocktails.

Now on to the food. We started with croquettas made with Iberian ham and chicken which take 4 days to make and the chef forces everyone to leave the kitchen when he is making them based on his secret recipe. They were rich, soft and crispy on the outside. Just as they should be. 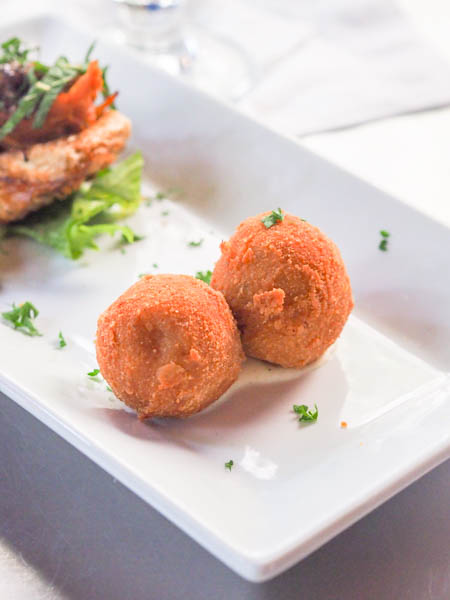 Our second food sample was a lightly breaded and fried eggplant base topped with shredded chicken cooked with cinnamon, sugar and mint. This was a surprising and very delightful blend of salty and sweet, which Shannon explained is a popular flavor combination in Puerto Rican cooking. 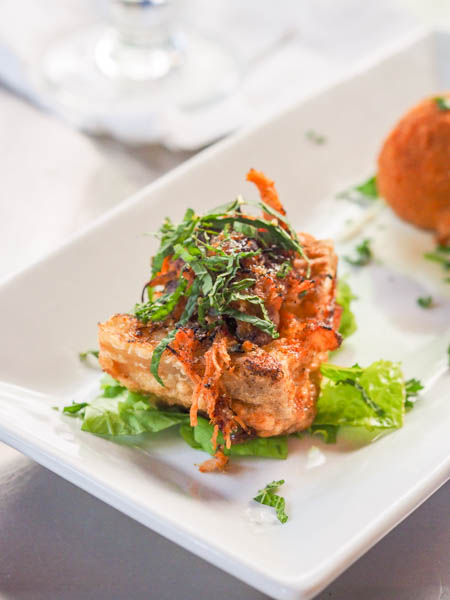 From there our walking tour continued and we were ready for a refreshing treat – guava popsicles from a super popular popsicle shop that makes all sorts of natural popsicles. We learned that the owned used to make medicine before traveling to Colombia and then making the switch over to popsicles instead. This place frequently has a line out the door, so you know it’s good. 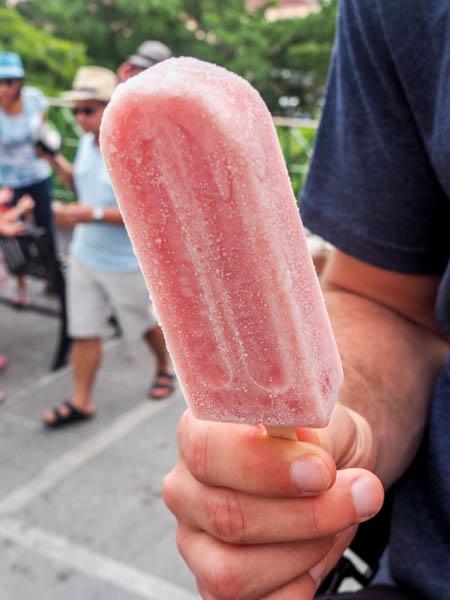 We naturally had to stop in front of Casa Estrecha – narrow house which is only 5 foot wide by 36 feet deep and is a gorgeous structure with bright vibrant colors. I need to get inside this place and see how it looks! 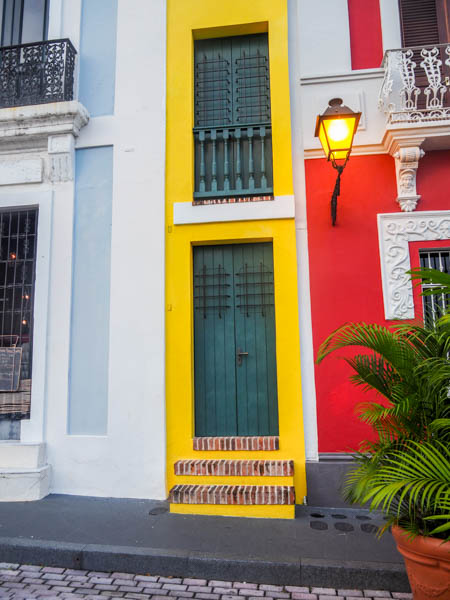 Stop number 3 was a restaurant that doubles as an art gallery (sorry no pics allowed). The owner is from South American and his wife is Puerto Rican. Here we first tried alcapurrias – a fried snack made with either yucca or plantains which are grind up and mashed then stuffed with beef or other fillings before beind wrapped in a Caribbean tree leaf and deep fried. This dish has some African influence, as was your quintessential street food snack.

We got to eat this with pique – Puerto Rican hot sauce. Shannon taught us a saying that Puerto Ricans believe you can have all the fried food you want as long as it comes with pique. If only I believed that too!

Here we also got to try some locally caught grouper ceviche – one of my all time favorite dishes! 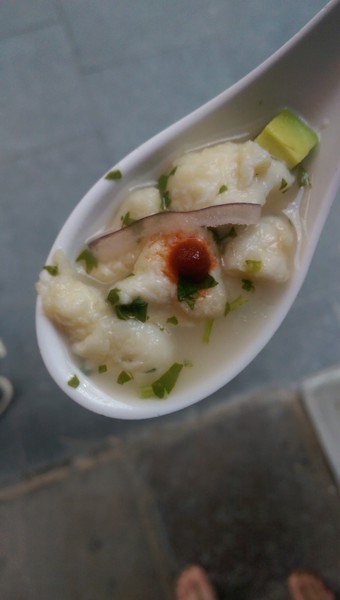 As we made our way to stop number 4 we passed the El Convento hotel which was an old convent that was bought out and turned into a five star luxury hotel. I love the design and look of the hotel. Simply gorgeous! 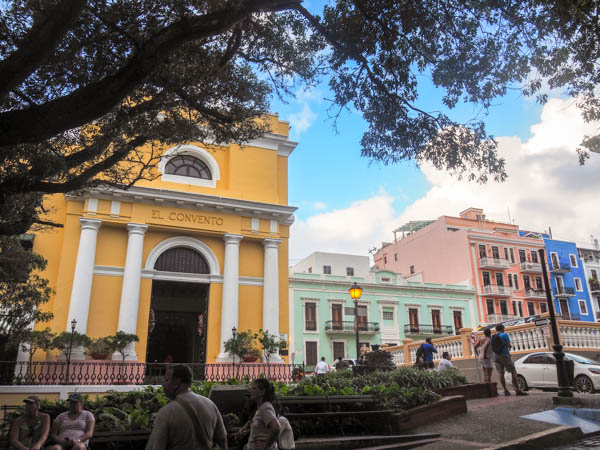 Stop number 4 was a spot where we would get to make our own mofongo – a classic Puerto Rican dish of mashed fried plantains! A pilon, similar to a mortar and pestle is used to make the mofongo. To the pilon, garlic, butter and cut up fried plantains are added which are then to be mashed with a push down and twist method. 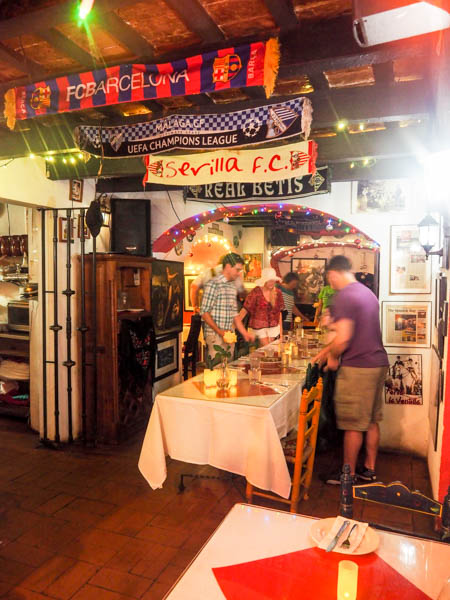 You can make it smoother, chunkier, depends on how you like it. Mofongo is one of my favorite Puerto Rican dishes so I loved getting my hands dirty and learning how to make this myself! 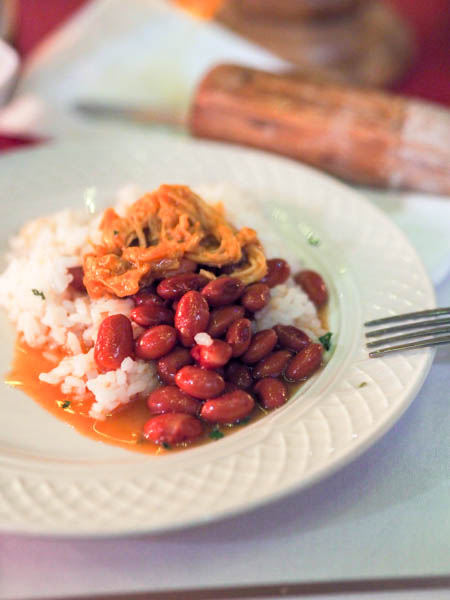 At this stop we had a chance to really sit down and chat with the other people on the tour and get to know them. We had a nice time chatting with the young couple sitting by us and learning all about their trip to Puerto Rico.

Then it was time for our last stop – dessert. We stopped by a chocolate cafe, a company that has been around since 1929 where we got to sample chocolate bars, hot chocolate and churros. 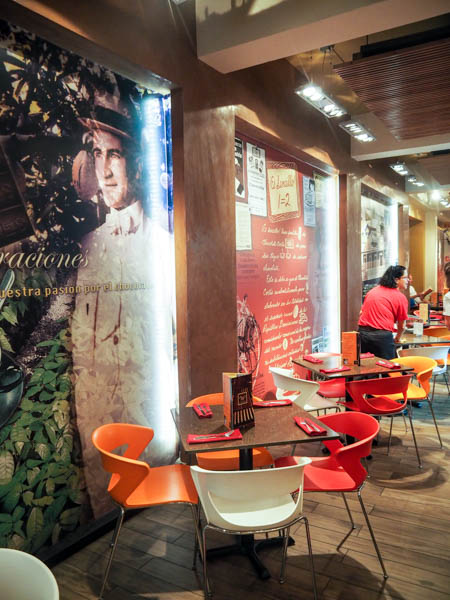 Now this stuff is the real deal. Super rich and indulgent. Interestingly enough Shannon shared with us that it is popular in Puerto Rico to eat chocolate bars with a slice of cheese. All at the same time. Can’t say this is quite for me, but loved learning about this interesting habit. 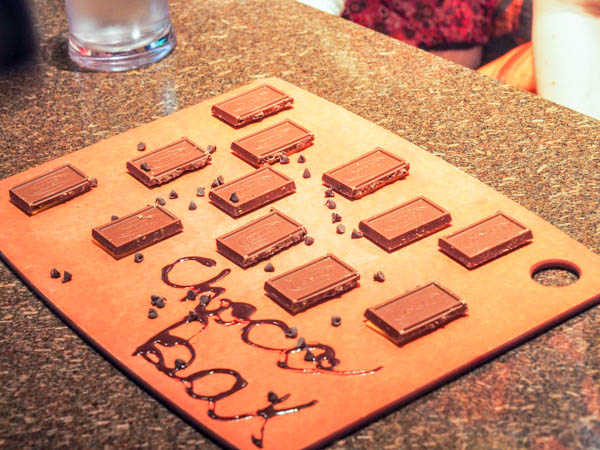 The hot chocolate was super rich, creamy and thick. Like what you always imagine a hot chocolate to be. While we were sipping our sweet indulgent beverage Shannon shared a few stories about the Cortes family. We learned that during the depression and war the chocolate bars were cheap and inexpensive, making them accessible for many, and so the company also added comic books that were printed up into every chocolate bar. For many this was the only reading material people had during those years.

I love learning about this family that has been giving back over the years.

That was our last stop on the tour. Overall we had a great time with Shannon learning about the history and culture of Puerto Rico while sampling all sorts of delicious dishes on our walk.

**We received two complimentary tour tickets, but as always all opinions expressed here are our own**