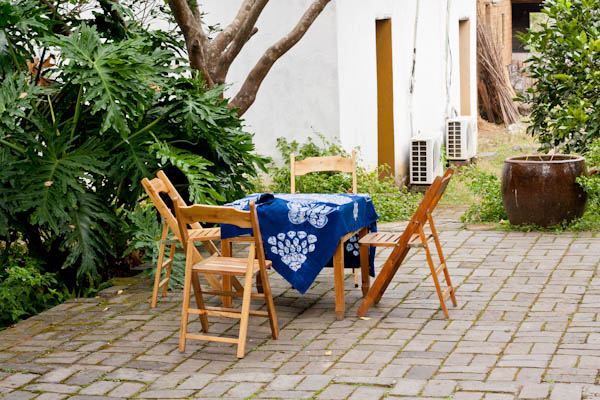 For my first ever cooking class I chose Yangshuo cooking school in Yangshuo China. I had no idea what to expect and was a little apprehensive to be honest. Would my cooking skills be up to par with everyone else’s? What if I couldn’t master one of the techniques or follow the teacher’s instructions? This also would be my first time preparing my own meal since we started traveling – almost two months. Plus, no Dave tagging along – he just wasn’t all that interested.

And so I set off alone to the meeting point – the entrance gate to Yangshuo Park. After a few minutes of wondering if they had forgotten about me, I was approached by Amy, our cooking instructor.  With the rest of the group, 2 older Dutch men, an older Norwegian couple, and two girls studying abroad in Hong Kong  one American, one Swedish, we left for the local market. 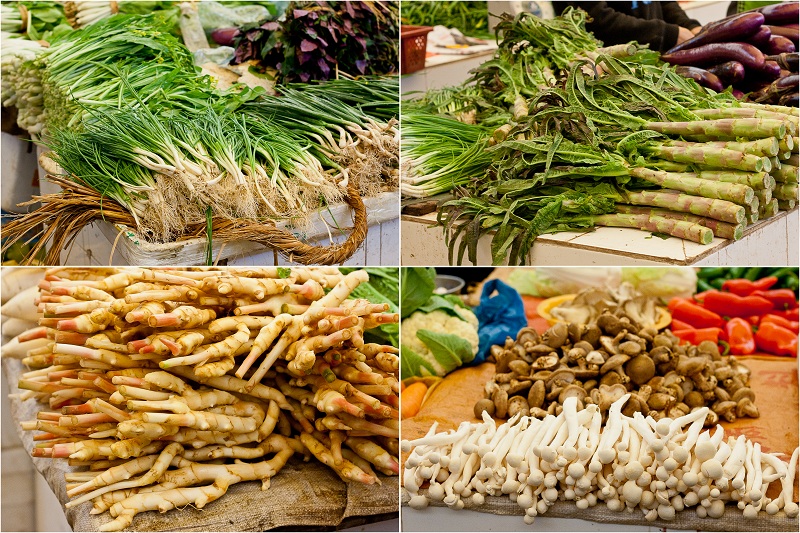 We were first led through the vegetable section – full of vibrantly colored local produce of all shapes and sizes. Vendors, veggies, customers galore. Little did I know this was only the tip of the iceberg. 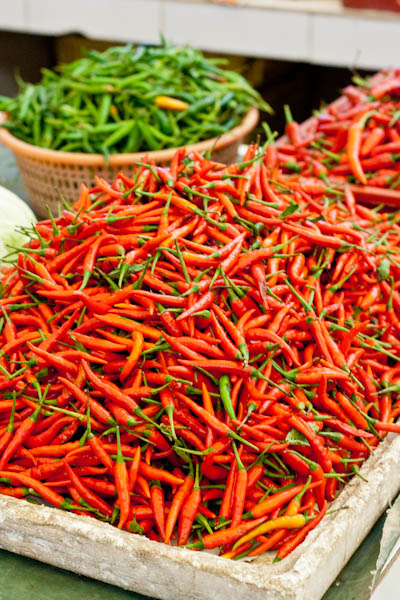 Amy warned us that we were approaching the meat section and advised anyone squeamish to stay behind.

Suddenly we were surrounded by animal carcasses. Fish, chicken, duck, pork – no creature was spared. As we circled the perimeter of the room we passed the stalls selling chickens and ducks, however, not in American fashion, but Chinese. Live animals featured in cages. The vendors themselves chopped whole birds into smaller pieces. Never before had I seen poultry sold this way. For the first time ever I stood directly in front of this behind the scenes act. An eye opener to say the least. 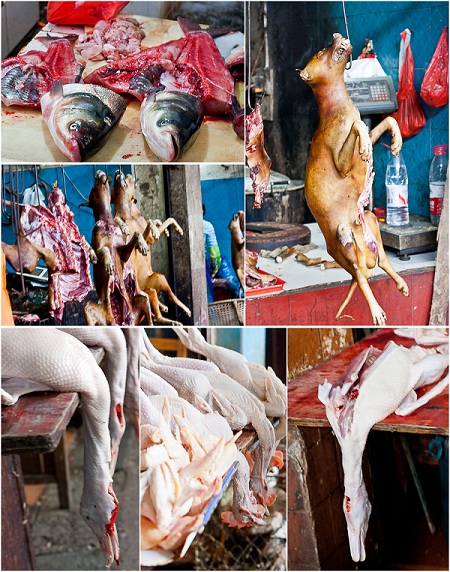 Then things “took a turn for the worse”. Dogs and cats – dead and alive, in cages and on hooks. You knew it was coming but, whether it was denial or simple naivety, I was not prepared to see it for my own eyes. The cats took me a little by surprise. We hurriedly snapped photos amidst the shouting of angry vendors

Despite not wanting to see it with my own eyes I felt compelled to preserve it in images. My reflexes took over.

We scuffled along, catching a glimpse of 3 dead, hairless cats whipped out of a scalding pot and tossed violently onto the ground. A woman viciously ripping apart a dead dog. A man using a blow torch to char a dog’s skin.

I’m not sure what I was expecting. The experience was disturbing to say the least. While I imagine American slaughter houses are just as gruesome (and most likely more), the brutal image of the hanging dogs and cats juxtaposed with caged, live ones was overwhelming. Did they know what was in store for them? I did.

I know, I know – the slaughter of chickens, pigs, and cows goes on everyday in the US and rarely raises an eyebrow. Why should I feel any different at seeing dogs and cats as well? All the same, my natural instinct was that “man’s best friend” should not be treated this way.

And yet, there was some benefit to all this. Now, more than ever, I understand the importance of knowing where your food comes from and believe that if you choose to eat meat you should see it in its real form, not just the prepackaged, neat, little boxes that fill the aisles in your local supermarket. More and more I am slowly getting turned off to meat and am seeking out vegetarian alternatives. 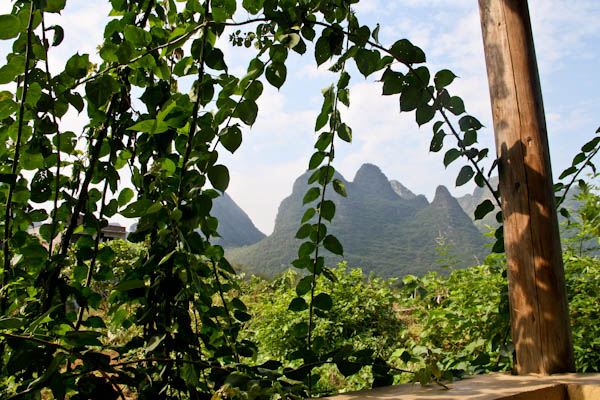 The traumatic experience at the market was briefly put on hold as we made our way to the countryside cooking school in the outskirts of the city. With picturesque karst peaks jutting out from all sides, I was almost able to erase from memory the horrific scenes from only minutes prior – it was the true image of peace and serenity. If only I could always cook with this scenery in the background.

Armed with a butchers knife thicker than my arm, I was master of my own cooking station. The fun was about to begin. The day’s menu consisted of 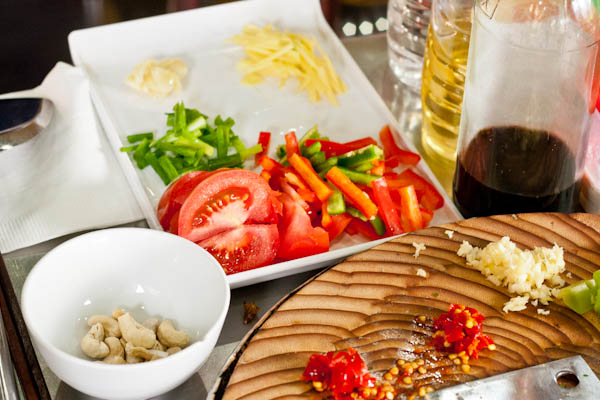 The vegetables were neatly laid out in front of us and we set to work. Amy gave us a small introduction as well as a minor demonstration. Slice the eggplant into eighths…mince half the garlic and ginger…quarter the tomatoes…halve and cube the carrots — these were the phrases floating around as we busily prepared our ingredients. Our main cooking assistants – peanut oil, soy sauce, and water. Oh, and some mini assistants- salt, pepper and oyster sauce.

Each dish was fairly simple and only required a handful of ingredients. With the recipes to be provided at the end of class we would be able to re-create these masterpieces at home. 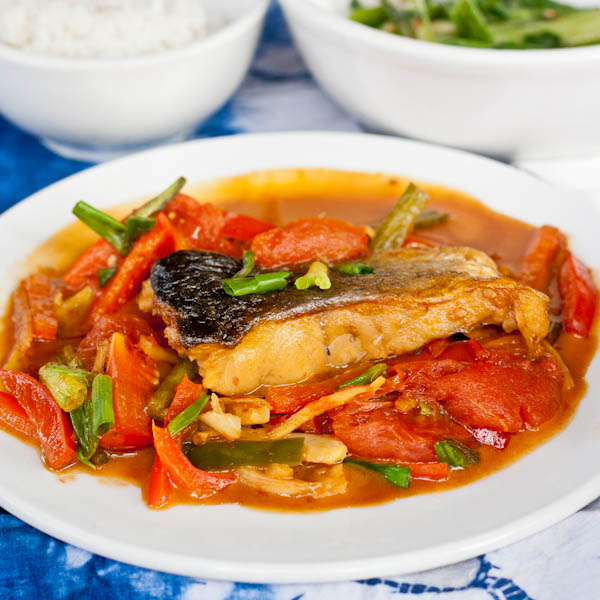 Time flew by. A couple hours later and all our courses had been prepared. We were ready to indulge in our meal together at the outside table overlooking the karst peaks. In my opinion all the dishes were a raving success and I wiped my plate clean with each dish. The beer fish was the star of the bunch – with the combination of succulent flavors just bursting to life. With the fish cooked to perfection the accompanying sauce of juicy tomatoes, crunchy ginger and garlic and smooth beer took it to the next level. 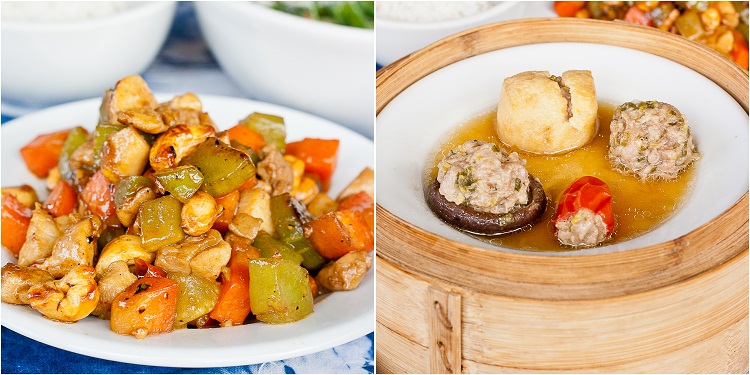 The chicken with cashew nuts was a simple recipe, easily recognized in the US and one that I’ve made before, though slightly different. The mushroom, tofu and tomato stuffed with a pork filling was the only (red) meat course and didn’t even feel too unhealthy as this was steamed in the traditional Asian, bamboo basket. 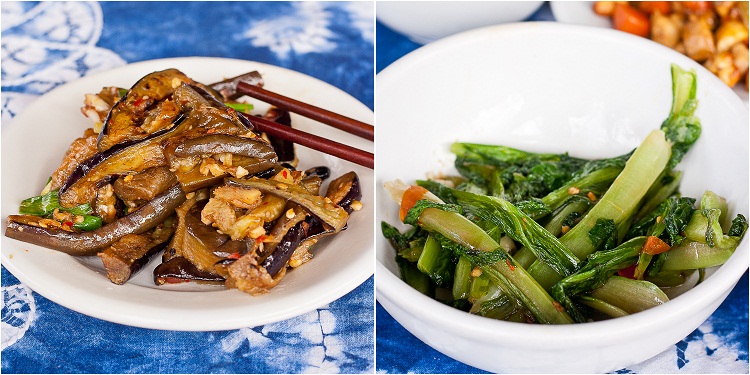 The veggie sides, you ask? Superb. Though simple salad greens rarely get stir-fried in the US this is a great alternative to a side salad. As for the eggplant? I only wanted more.

Overall, I fully enjoyed my time at the Yangshuo cooking school. Yes, the market is intimidating, to say the least, but is necessary. As for the class itself, I would have liked a bit more back story into the history of the recipes and Chinese or Yanghsuo cuisine in general, but the cooking instruction was great and the class was well organized. With pickup and dropoff included, the logistics are taken care of for you. One of the best parts of the cooking class for me was picking up 5 new recipes and learning some inner Chinese cooking techniques or secrets.

Tip 1: Heat wok over high heat until smoking. Reduce heat and add oil. Hot wok, cold oil.
Tip 2: When stir frying veggies always add a couple tablespoons of water, but wait to stir the veggies until the water is bubbling, otherwise the veggies will taste watery.

After my first cooking class my hunger for more classes is only increased. I look forward to participating in more cooking classes during our travels, and even at least once more in China.

To see the recipes themselves check them out on my food blog:

I received a discount in exchange for this review. As always though all opinions expressed here are my own.