Some days I find myself a bit down about travel.

We’re constantly on the move.

We’re not taking great care of ourselves.

The list from Davie-Downer goes on and on. But then there are those times when I’m just so pumped up it’s hard to imagine doing anything else with my time. Que the Tiger Leap Gorge. 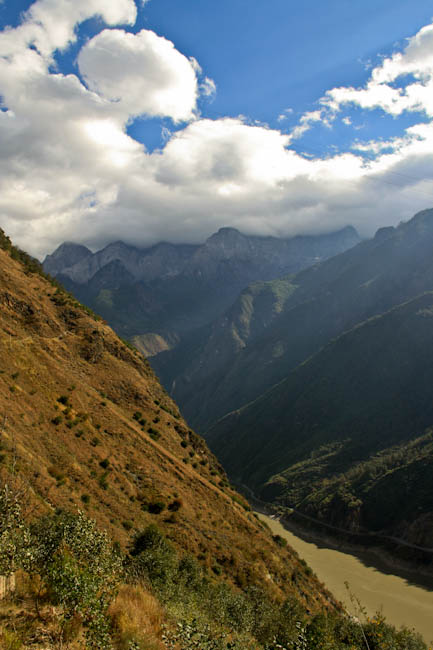 Vicky and I have been looking forward to this hike ever since we read that it was one of the top 10 in the world. Still, in the back of my mind, after all the hiking we’ve done in China, Korea, and Japan, I couldn’t help but think:

“Alright, we’re going to wake up at the crack of dawn, board a bus for 3 hours and then walk for 7. We’ll spend the night at a cold, sterile hostel in the mountains. No shower. Overpriced food. The hike will be nice, but not offer any views dramatically different from what we’ve seen 10 times before. It will just be Vicky and I the whole way through. Why are we not on the beach yet?”

That’s the mindset I boarded the bus with. Do I seem like a fun, morning bus-buddy? Poor Vicky.

Upon boarding the bus my eyes were drawn instantly to the dark figure in the very back seat. Was it a bird? A plane? No, a FOREIGNER (dressed mostly in black)! And not just any foreigner, but a chatty, English speaking one at that! Hooray – communication with the outside world. The day was starting off fantastically. That’s when another one boarded, this time from Israel. I was overwhelmed. So there we were, a band of brothers, all on our way to do one of the most sought after hikes in the world, united by the mere fact that we all speak the same language.

We had been told the hike was pretty straight-forward – no funny business, just a straight hike all the way. A guide wasn’t necessary. If I had a dime for all the times… We had barely started and we’re already confused. Here’s a riddle for you:

Question: How many foreigners does it take to figure the Tiger Leaping Gorge Hike?

There were multiple paths that you could take, the lower, the middle, and the upper. Now I know what you’re thinking: The lower one is the one that goes down, the upper one is the one that goes up, and the middle is the other one. Sound logic, but it’s not that easy! Especially when the entire trail is marked by a series of cryptic, faded arrows lacking anything resembling coherent directions. For all we knew, a couple of 10 year old children ran along the trail with paint hoping to fool a few unsuspecting, naive travelers (admittedly, 15 years ago I’d probably have done the same thing). 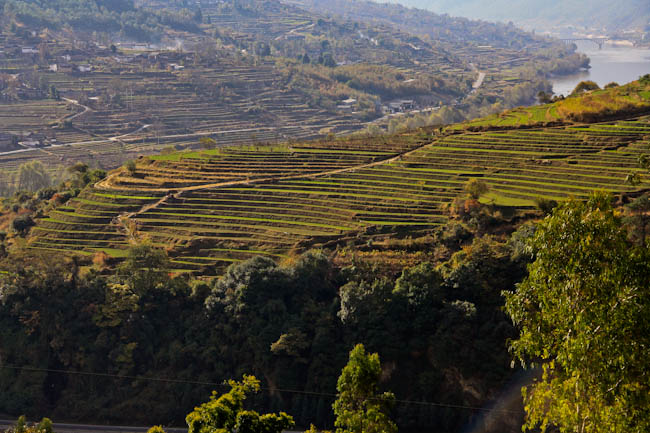 Still, the views were spectacular right from the start and no one was complaining…yet.

Despite it being November, we were all terribly overdressed. None of us, apparently, had checked the weather. Our route was marked by random articles of clothing strewn along the path like bread crumbs. Vicky’s socks would lead us back if we ever took a wrong turn. Just kidding, we didn’t actually litter – littering is not cool. But it was hot, and my wear-everything-you-own strategy was failing me…hard. Along the way we snowballed with a few more hiking groups. A French guy and girl, an Englishman, and a Dutch girl – it was practically a UN meeting. 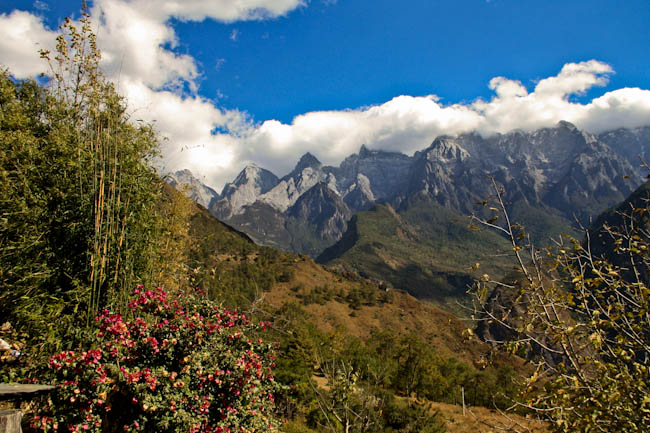 After about two hours of gorgeous (pun intended) views we stopped for lunch at Naxi Guest House. What I love most about these moments is that everyone has a different travel background, usually ranging from a few weeks to a few years. The stories that are passed around are hilarious and get you excited about the prospect of visiting that place in the future. One man’s horrific (yet hilarious) travel experience is another man’s future adventure. Stories from India usually take the cake. Lunch lasted 1.5 hours, the way it should be, in part due comical stories but more likely due to what was coming up next…. 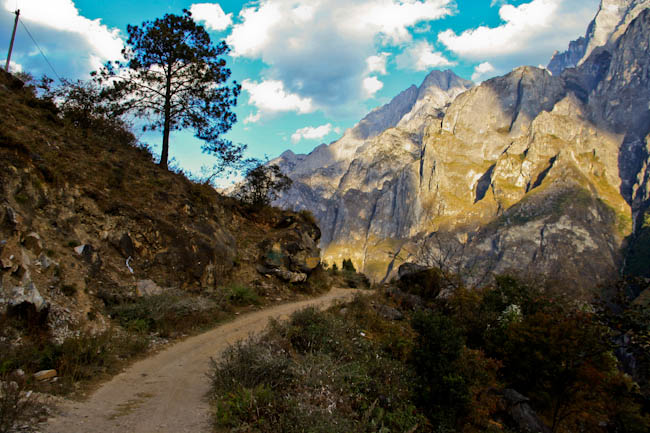 Although generally a casual hike, the Tiger Leaping Gorge takes a turn for the sadistic once you reach the 28 Bends, aptly named for the 28 twisting turns that take you up the top of the mountain. One traveler noted that she was begging for death during this part. Surely there were members of our group who can relate, but I won’t name names.

Halfway into the 28 bends we came across a store where they were selling the usual goodies; snickers, water, oh and marijuana. Not sure where that would come in handy as it’s probably the last thing you need to make your way up this hill.

As for me, despite losing count around 44 (what counts as a bend anyways?), I think I fared alright. So much so, actually, that I smiled thinking about how awfully difficult the hike was in Busan at the time. I’ve come a long way and it was satisfying to reap the rewards in real time.

The Half Way Hostel + Day Two 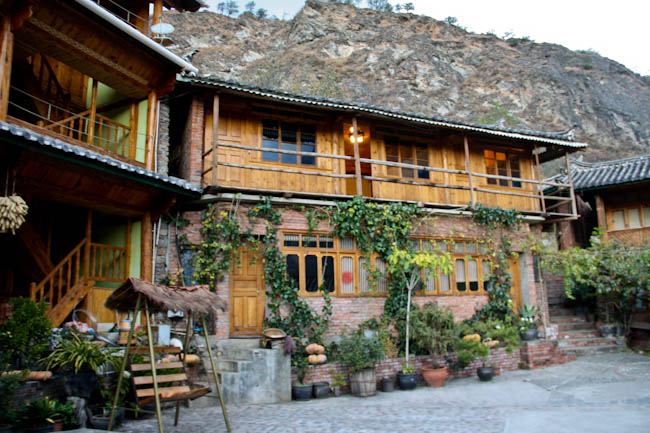 Fast forward 4 hours and we make it to the Half Way hostel just around sunset. There were 8 of us at dinner and only 1 thing on our minds: sleep.

The next morning we set off on the last leg of the trek, which is considerably shorter than the first (for once). It consisted of a 1.5 hour trek to Tina’s hostel where the bus would pick us back up to return to Lijiang. Somewhat surprisingly, the path, while wide, is essentially the edge of a steep cliff – a few wrong steps and you’d find yourself tumbling down to your death. I don’t even think I’m exaggerating here. It’s true, the odds of making 5 wrong steps in a row are low, but I was slightly more on guard than usual.

After arriving at Tina’s, you can make a side trip down to the bottom of the gorge and see where the tiger allegedly lept away from the hunter (though it will cost you $1.50). A few people were in uproar about the added cost (to be fair, along the way they charge at various parts for taking pictures), so we did a side trip down about halfway to the gorge free of charge. 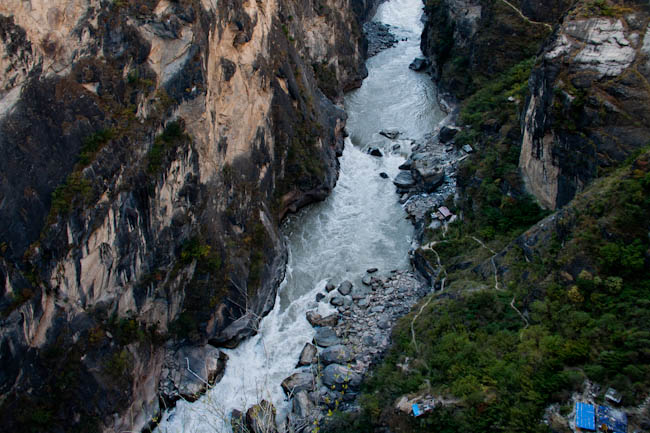 The day ended as it should; A tasty meal, good conversation, and a few rounds of cards. 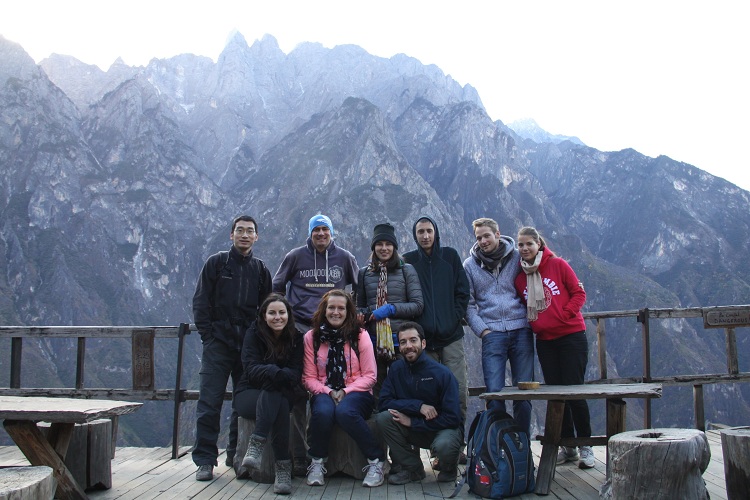 The bus from Lijiang leaves in the morning around 8AM and costs around 35 yuan. It will get you to TLG in about 2.5 hours.

You have to walk to the entrance (there is a well defined path). Tickets to the TLG cost 60 yuan.

It takes about 2 hours to walk to Naxi guest house where you can get a good meal for a reasonable price. From there it is another 5+ hours to the halfway house (private rooms are around 80 yuan, dorms are 35 yuan).

The path is marked with painted arrows but they can be faded and signs are very limited. For the most part the path is clear but there are a few nondescript turns.

The next day you can walk to Tina’s (1.5 hours) from where you can go to the middle leaping gorge down to the water (for a price of 10 yuan) or keep walking further for a free walkway to a view point (but not all the way down) and the bus leaves around 3pm back to Lijiang and costs about 55 yuan.